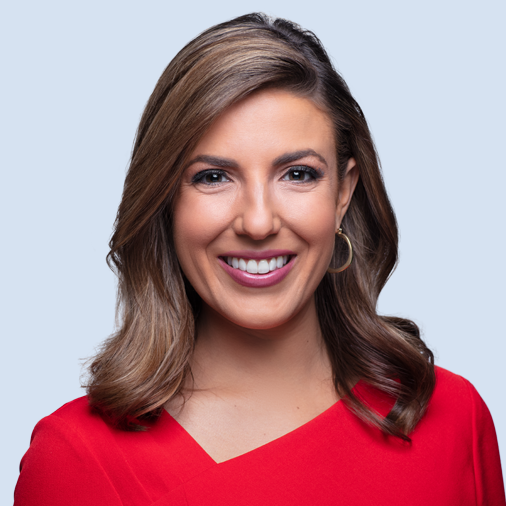 Emily came to New England from St. Louis where she was a weekend evening anchor not far from her small hometown of Waynesville, Missouri. Before that she anchored and reported in Sacramento, California and South Bend, Indiana. She is a graduate of the University of Missouri (Mizzou).

Emily loves sports and is looking forward to experiencing what it’s like to be a Boston fan. Some of her personal highlights over the years include reporting from the NBA Finals in Oakland and Super Bowl XLVI between the Patriots and the Giants in Indianapolis. She also covered the University of Notre Dame, reporting on the Fighting Irish football team and their appearance in the 2013 National Championship as well as the women’s basketball team’s trips to the Final Four.

Emily’s Boston connection dates back to 1636 when her ancestors immigrated here from Wales. If you can’t tell she loves genealogy!

In her free time, Emily is likely spending time with her dog, Albert. She loves exploring the outdoors which can include hiking or traveling to new places. One of her largest outdoor achievements was completing both the Chicago and Philadelphia Marathons.

Emily truly believes great things happen everywhere and we all want to see good things on the news, so please share with her. You can email her at epritchard@whdh.com. Don’t forget to connect with Emily on Facebook, Twitter, and Instagram.