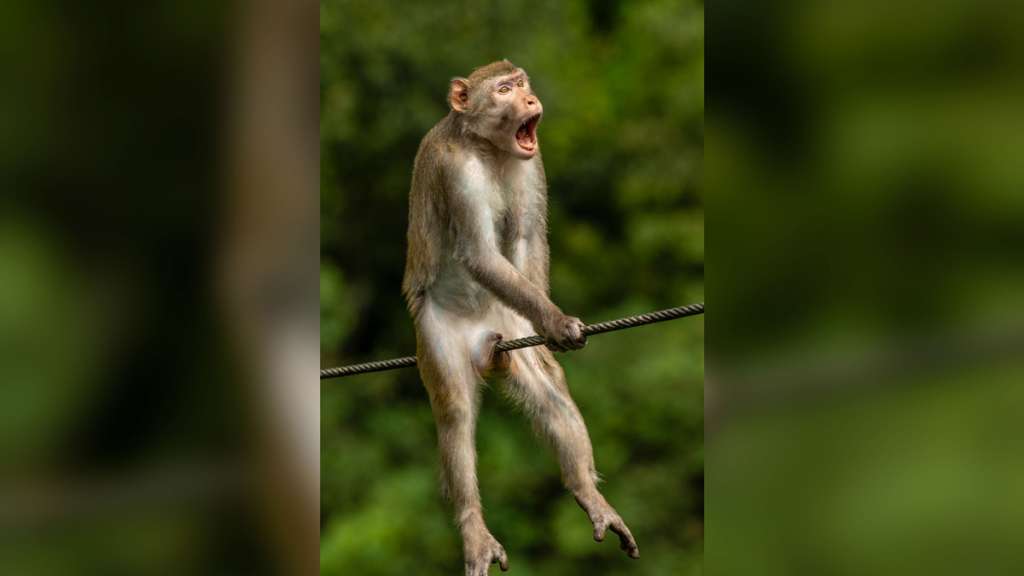 (CNN) — An image of a golden sink monkey wearing a pained expression has won the overall prize at this year’s Comedy Wildlife Photography Awards.

The photograph is the work of amateur UK photographer Ken Jensen, who beat off competition from 7,000 other entries, according to a statement from the Comedy Wildlife Photography Awards published Wednesday.

Jensen shot the image on a bridge over the Xun river in Yunnan, southwestern China, in 2016, capturing the moment the male monkey sat on one of the supporting wires of the bridge.

“I was absolutely overwhelmed to learn that my entry had won, especially when there were quite a number of wonderful photos entered,” Jensen said in the statement.

“The publicity that my image has received over the last few months has been incredible, it is such a great feeling to know that one’s image is making people smile globally as well as helping to support some fantastically worthwhile conservation causes.”

This year’s competition will donate 10% of its total net revenue to Save Wild Orangutans, which works to safeguard wild orangutans in Gunung Palung National Park, Borneo.

John Speirs won the Affinity Photo People’s Choice Award for his image of a pigeon with a leaf on its face, and Arthur Trevino won the Animals of the Land category with his shot of a small prairie dog facing off against a bald eagle.

An image of a mother otter getting tough with her pup took home the Creatures of the Water award for Chee Kee Teo, and Vicki Jauron won the Portfolio Award for a set of four images of a young elephant having fun in mud at the Matusadona Park, Zimbabwe.

And the Video Category winner was Rahul Lakhmani, whose clip shows a white-throated kingfisher appearing to knock another bird over with an overenthusiastic hug.

Last year’s winner was Mark Fitzpatrick’s photo of a turtle appearing to put its middle finger up to the camera, and two years ago Sarah Skinner came in first with her shot of a lion cub making a wince-inducing pounce toward the nether regions of a bigger cat.