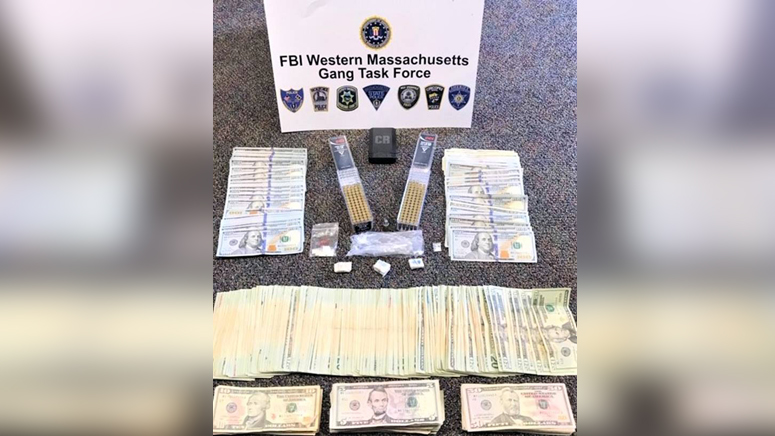 HOLYOKE, MASS. (WHDH) - A pair of Holyoke men are facing criminal charges after a gang task force raid last week resulted in the seizure of heroin, cocaine, hundreds of rounds of ammunition, and thousands in cash, officials said.

State and local police, along with members of the FBI, arrested 33-year-old Juan Pacheco and 19-year-old Herman Gomez after executing a search warrant on the second floor of 561 South Summer St. on Friday, according to Massachusetts State Police.

After making forced entry into the apartment, police say Pacheco was found carrying a pill bottle filled with crack cocaine, a bag containing crack cocaine, and 15 baggies of heroin stamped with the words “Frosted Flakes” in blue ink.

Holyoke police K9 Ryker later sniffed out a dresser in Gomez’s room that was filled with seven bags of heroin, all of which were stamped in blue ink with the word “Deadline.” Several small bags of cocaine were also said to be found under the dresser.

Police say two open boxes of .22 caliber ammunition, containing a total of 148 rounds, were found inside of a sock on Gomez’s bedroom floor. A total of $10,900 in cash was also seized from the room.

Pacheco and Gomez are said to have had a video surveillance system set up at the residence that included three cameras on the front of the building and another on the rear.

An investigation into heroin distribution at the apartment is ongoing.