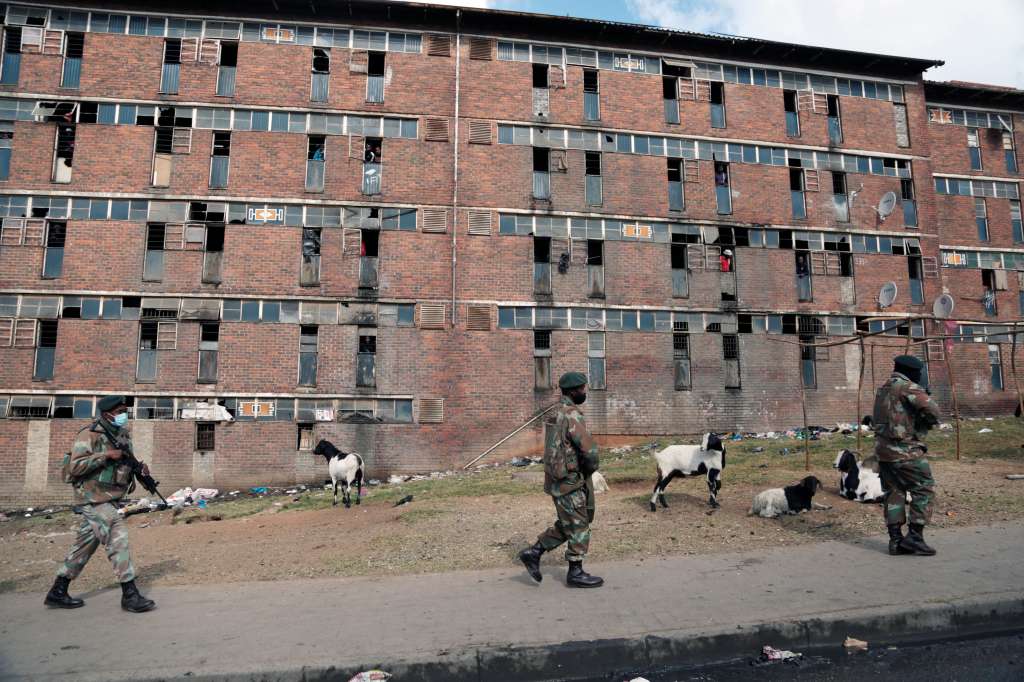 JOHANNESBURG (AP) — In one of the largest deployments of soldiers since the end of white minority rule, 25,000 South African troops began taking up positions Thursday to help quell weeklong riots sparked by the imprisonment of former President Jacob Zuma. At least 117 people have been killed in the violence, authorities said.

The government said 10,000 soldiers were on the streets by Thursday morning patrolling alongside police, and the South African National Defence Force had also called up all of its reserve force of 12,000 troops.

In a show of strength, a convoy of more than a dozen armored personnel carriers brought soldiers into Gauteng province, South Africa’s most populous, which includes the largest city, Johannesburg, and the capital, Pretoria.

Buses, trucks, airplanes and helicopters were also being used to move the large deployment of troops to trouble spots in Gauteng and KwaZulu-Natal province that have seen violence in mainly poor areas.

The unrest erupted last week after Zuma began serving a 15-month sentence for contempt of court for refusing to comply with a court order to testify at a state-backed inquiry investigating allegations of corruption while he was president from 2009 to 2018.

Protests in Gauteng and KwaZulu-Natal quickly escalated into a spree of theft in township areas, although it has not spread to South Africa’s seven other provinces, where police are on alert.

More than 2,200 people have been arrested for theft and vandalism and 117 people have died, Khumbudzo Ntshavheni, acting minister in the presidency said Thursday. Many were trampled to death in chaotic stampedes when shops were being looted, according to police.

“These are not demonstrations. This is economic sabotage and we are investigating with a view to apprehending the instigators,” Ntshavheni said at a briefing Thursday. One person has been arrested and 11 others are under surveillance for inciting and planning the unrest, she said.

The armed patrols have brought stability to Gauteng, authorities said. Army troops stood guard at the large Maponya mall in Soweto, which was one of the few retail centers not badly hit by the rampage but remained closed.

Volunteer groups cleaned up shattered glass and debris from shops that had been stormed and looted in Johannesburg’s Soweto, Alexandra and Vosloorus areas.

“I spoke to some of the guys who are unemployed in my area to come and help. The mayor supported us with transport to get here. We came here with two buses,” said George Moswetsa, a resident of Vosloorus in eastern Johannesburg who was helping to clean up a mall that had been trashed.

The unrest, however, continued Thursday in KwaZulu-Natal, Zuma’s home province. There were renewed attacks on shopping centers and several factories and warehouses were smoldering after being hit by arson attacks.

Police discovered more than 10,000 rounds of ammunition in Durban on Wednesday night, which Minister of Police Bheki Cele said belonged to people who were instigating the violent riots in the province.

“In KwaZulu-Natal, it’s well-coordinated, well-funded. If you look at it, strategic commercial hubs were blocked, strategic roads were blocked at really key points. It was very organized,” said Gumede, chairman of the Democracy Works Foundation, a group supporting governance in Africa.

Zuma, throughout his political career, including his nine years as president, acquired many allies in South Africa’s military and security services who were reluctant to respond to the violence in his home province, Gumede said.

“The arson, the looting and then the burning of malls, the burning of warehouses, I mean, that indicates a really strategic destruction of the economy of KwaZulu-Natal,” said Gumede. “There’s a whole lot of organization behind that.”

Soldiers and police worked to reopen the N2 and N3 toll highways, which have been closed for days as burned-out trucks blocked the roads. The highways are important transport routes carrying fuel, food and other goods to all parts of the country and their prolonged closure threatens to cause shortages of essential goods.

The rail line to the strategic Indian Ocean ports of Durban and Richard’s Bay was also closed by the unrest, the state-owned transportation company, Transnet said. The 688-kilometer (427-mile) rail line ferries hundreds of tons of goods weekly to the ports, including vehicles, gold ore, aviation fuel, petrol, wheat and citrus fruit. The goods are then shipped to markets in Asia, Europe, and the United States.

Security forces increased their presence in the Durban suburb of Phoenix, where the riots caused racial tensions to flare. The predominantly Indian residents of Phoenix had been patrolling their area against the unrest and are accused of shooting Black people suspected of being rioters.

“Lives have been lost. The communities have a standoff and are in a bad way because it is the Indian community and the neighboring communities, who are African,” Cele told a news conference in Phoenix, where he said 15 people had been killed.

Gumede said the way forward for South Africa is to prosecute the perpetrators, both those that stole property and those who may have instigated the violence.

In neighboring Zimbabwe, the police issued a warning Thursday against people getting goods stolen from South Africa.

“With sad events happening in South Africa, the Zimbabwe Republic Police will not hesitate to arrest anyone who has received or is in possession of stolen goods from South Africa,” the police statement said, advising people to have receipts for verification that goods were purchased legally. “A criminal in South Africa is a criminal in Zimbabwe.”

The largest deployment of soldiers since South Africa won democracy in 1994 was in March 2020, when 70,000 army troops were sent out to enforce the country’s strict lockdown to combat the spread of COVID-19.