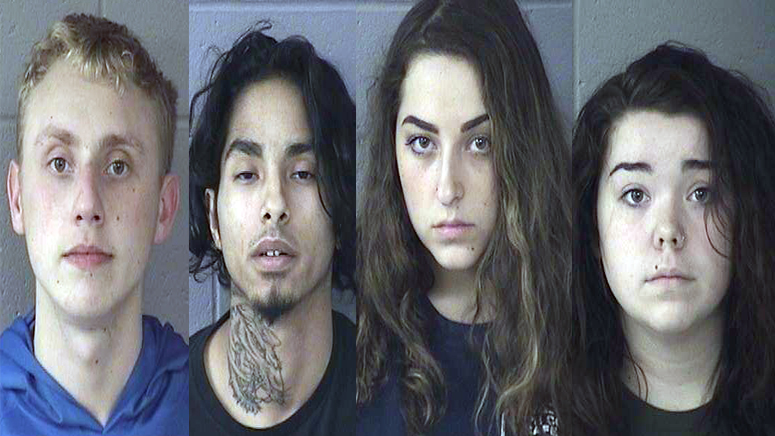 BRIDGEWATER, MASS. (WHDH) - Four people are facing criminal charges after a traffic stop in Bridgewater on Saturday ended with the seizure of a shotgun, a revolver, several bladed weapons, and marijuana, authorities announced Tuesday.

An officer on patrol on Vernon Street in the area of Boxwood Lane stopped 21-year-old Mark Cardone, of Brockton, for driving around with a revoked registration, according to the Bridgewater Police Department.

Cardone, who had three passengers in his 2015 Chevrolet pickup, was unable to locate his driver’s license or registration, police said. Everyone was then ordered out of the truck and the contents of the vehicle were inventoried.

During a search of the truck, police say the officer found a loaded 12-gauge shotgun. Cardone was subsequently arrested.

One of Cardone’s passengers, 19-year-old Shawn Messinger, of Taunton, had a backpack that contained a loaded revolver with a brown handle, a medium-sized bag of marijuana, a hatchet, several knives, a scale, and a box of pellets, police said.

Cierra McKeown, 19, of Taunton, and Kathleen Martin, 18, of Brockton, were also taken into custody.

Messinger is charged with carrying a firearm without a license, carrying a dangerous weapon (black powder pistol), and unlawful carry of a loaded shotgun.

McKeown and Martin are both facing charges including carrying a firearm without a license and unlawful carry of a loaded shotgun.

All four suspects were arraigned Monday in Brockton District Court.