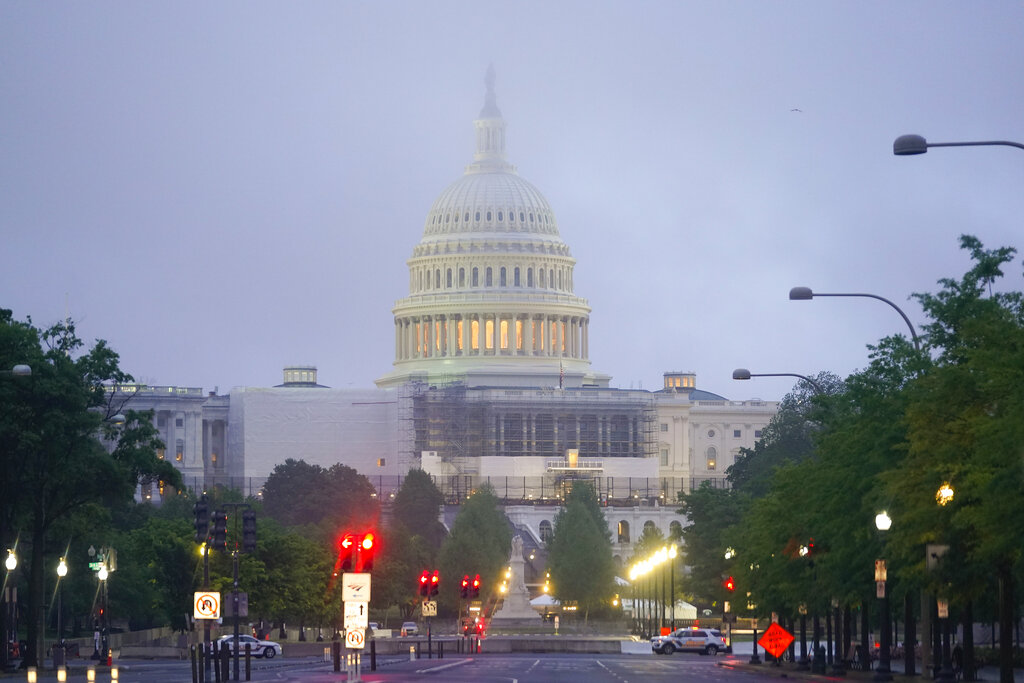 Morning fog begins to lift around the US Capitol in Washington, Saturday, May 14, 2022. (Photo/Pablo Martinez Monsivais)

The people identified themselves as being affiliated with CBS’ “Late Show with Stephen Colbert,” a person familiar with the matter told The Associated Press.

Another person familiar with the matter provided the AP with a list of nine people who had been stopped by Capitol Police. They included several producers, along with Robert Smigel, the voice behind Triumph the Insult Comic Dog.

The crew was filming a segment where a puppet interviews members of Congress, including U.S. Congressman Jake Auchincloss.

In a statement, his office said that “the congressman had a scheduled interview with CBS, as did other members of Congress. Our contact with them ended well before the building closed for the evening. We do not condone any inappropriate activity and cannot speak to anything that occurred after hours.”

The two people who spoke with the AP could not discuss details of the investigation publicly and spoke on condition of anonymity.

Capitol Police said they received a call about a disturbance in the Longworth House Office Building around 8:30 p.m. “Responding officers observed seven individuals, unescorted and without Congressional ID, in a sixth-floor hallway,” the agency said in a statement. “The building was closed to visitors, and these individuals were determined to be a part of a group that had been directed by the USCP to leave the building earlier in the day.”

The Capitol Police said they were told to leave and didn’t.

Claims have surfaced that the crew staged an “insurrection,” referencing the January 2021 Capitol riot.

“I am shocked I have to explain the difference, but an insurrection involves disrupting the lawful actions of Congress and howling for the blood of elected leaders– all to prevent the peaceful transfer of power,” Colbert said. “This was first-degree puppetry.”

In a statement to The Hollywood Reporter, CBS said the production team was at the Capitol Wednesday and Thursday to record a comedy segment featuring Triumph.

“Their interviews at the Capitol were authorized and pre-arranged through Congressional aides of the members interviewed,” the network said. “After leaving the members’ offices on their last interview of the day, the production team stayed to film stand-ups and other final comedy elements in the halls when they were detained by Capitol Police.”

The USCP statement said the case remains “an active criminal investigation, and may result in additional criminal charges.” Capitol Police, departing from standard practice, refused to provide the names of the people who were arrested.