A significant winter storm with snow, sleet, and freezing rain expected to impact the eastern US 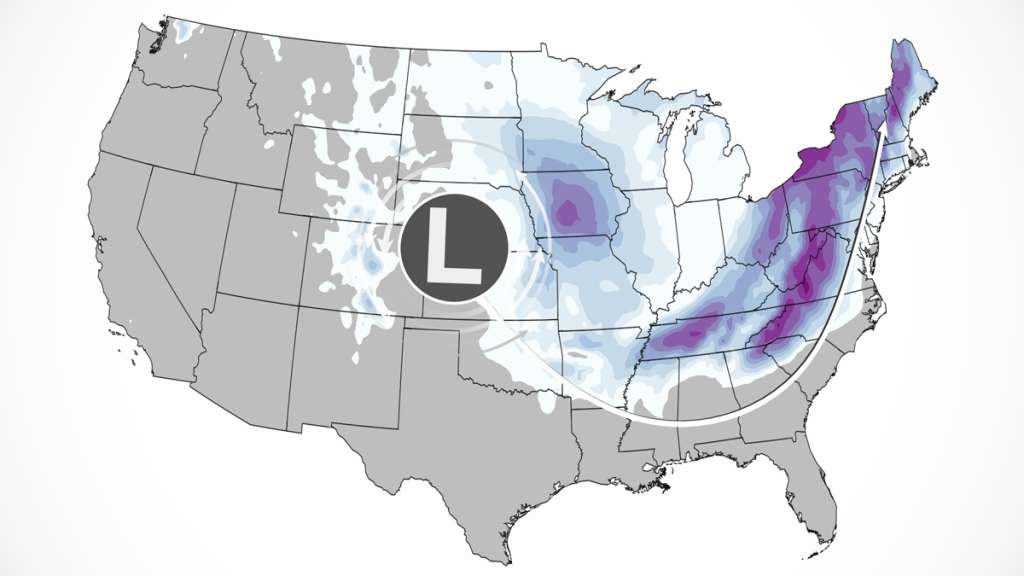 (CNN) — Over 50 million people are under winter weather alerts due to a dangerous system making its way from the Central US to the South and then the Northeast in the next three days.

A low-pressure system currently in the Central Plains begins to dive into the lower Mississippi Valley region by Friday night. Saturday, that low meanders slowly across the Southeast before finally heading north along the Eastern Seaboard.

Rain, snow, sleet, or freezing rain — how about all of those in a 24-hour time span? That’s going to be the case in some states this weekend.

So, let’s break down the potential hazards in each region.

The storm will move through parts of the Midwest and the Middle Mississippi Valley on Friday, dropping as much as a foot of snow.

Winds will also kick up across these regions, leading to blowing snow and poor visibility.

“Travel impacts are expected to be significant at times, especially during afternoon school departures and the evening commute,” the National Weather Service (NWS) office in Des Moines said.

Heavy snow will fall across portions of the Dakotas, Iowa and Minnesota with 6-12 inches of snow expected.

From there, the system dives deeper south heading into Missouri, Arkansas and Kansas.

“How fast surface temperatures fall below freezing, and therefore, how fast rain changes to snow will play a big role in determining just how much snow accumulates,” the NWS office in Topeka, Kansas, said.

Southeast gets a mix of everything

For a lot of the Southeast, this system begins in the form of rain on Saturday.

As the temperatures drop, that rain changes over into freezing rain, sleet and eventually snow for many locations.

Forecasting winter weather in the Southeast is never easy, as timing often comes down to the wire.

“These different types of wintry precipitation are very sensitive to small changes,” said Kyle Thiem, a meteorologist at the NWS office in Atlanta. “A change of just a degree or two can mean the difference from relatively harmless rainfall to very impactful ice and snow accumulations.”

However, it is the slow forward speed of this system that provides the setup for a crippling ice storm that could knock out power to millions.

The Carolinas will be the most likely area to experience the ice, with cities like Charlotte and Columbia picking up as much as a half-inch of ice, that, along with strong winds, will bring down trees and power lines.

The NWS office in Greenville, South Carolina, is warning that ice accumulations will become very dangerous along and east of I-85 including Spartanburg, South Carolina, all the way up to Salisbury, North Carolina. This includes the entire metro Charlotte area.

In the southern Appalachian Mountains, the snow totals will go up as quickly as the elevation does. Asheville, North Carolina, for example, is forecast to pick up 8-12 inches, but could top as high as 20 inches at elevations above 4000 feet.

The storm will turn to the East Coast on Sunday and Monday, with heavy snow of more than a foot expected in some locations.

Some snow will fall in the major metro areas of Washington, DC, Philadelphia, New York and Boston, but a change to rain will hold down the accumulations.

“At this time, the most likely scenario is a heavy burst of snow on the front end for most, as the storm moves into the region Sunday afternoon, followed by ice during the evening and plain rain possibly for areas near and east of I-95,” the NWS office in Baltimore said Friday morning. “At this time, icing is not expected to reach our far western zones, where the heaviest snow of a foot or more is possible.”

Interior cities such as Charleston, Pittsburgh, Buffalo, Syracuse and Burlington, Vermont, will see the heaviest snow.

What helps the Northeast is that long before the bulk of the snow arrives, very cold air and dangerous wind chills will be in place.

Wind chill alerts are in effect for over 20 million people Friday and Saturday, as feels-like temperatures could drop as low as 40 to 45 below zero across much of interior New England.

“The dangerously cold wind chills could cause frostbite on exposed skin in as little as 10 minutes,” the NWS warns.