A Star is Born: Cosmic hourglass captured by the James Webb Space Telescope reveals birth of a star 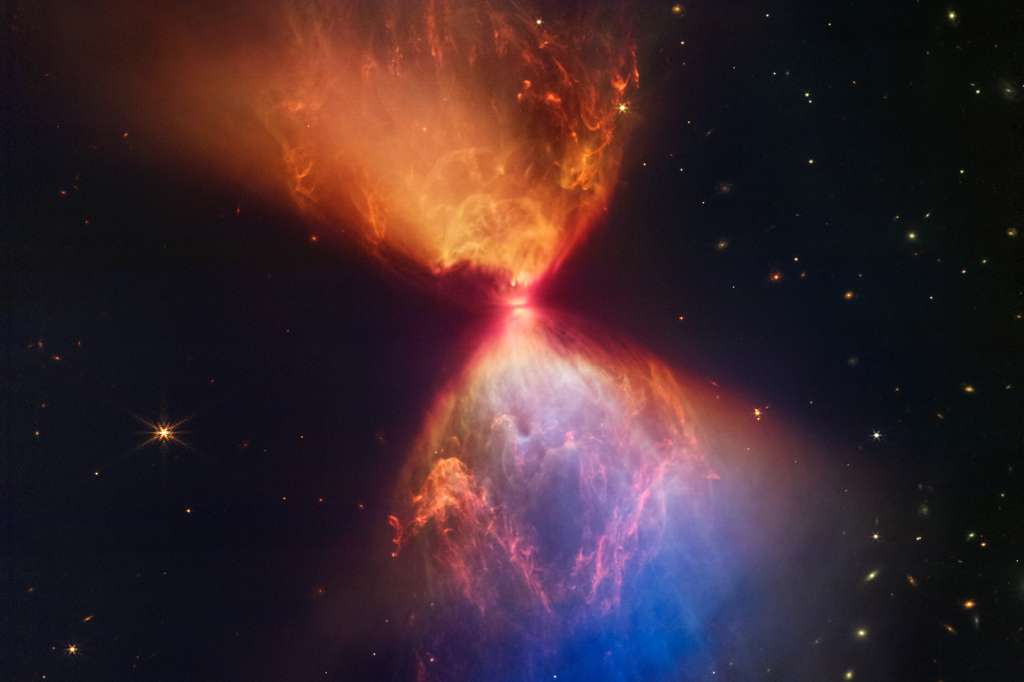 The protostar L1527, shown in this image from the NASA/ESA/CSA James Webb Space Telescope, is embedded within a cloud of material that is feeding its growth. Material ejected from the star has cleared out cavities above and below it, whose boundaries glow orange and blue in this infrared view. The upper central region displays bubble-like shapes due to stellar ‘burps,’ or sporadic ejections. Webb also detects filaments made of molecular hydrogen that has been shocked by past stellar ejections. Intriguingly, the edges of the cavities at upper left and lower right appear straight, while the boundaries at upper right and lower left are curved. The region at lower right appears blue, as there’s less dust between it and Webb than the orange regions above it.

(CNN) — The cosmic chaos caused by a very young star has been captured in the latest enchanting image from NASA’s James Webb Space Telescope.

The protostar the image centers around is hidden from view in the neck of a dark, hourglass-shape cloud of gas and dust. The dark line across the middle of the neck is a protoplanetary disc — dense gas and dust that could form a planet in the future — about the size of our solar system. Light from the protostar spreads above and below this disc, according to a news release.

It has a long way to go until it becomes a full-fledged star. L1527, as the protostar and its cloud are known, is only about 100,000 years old — a relatively young celestial bodycompared with our sun, which is about 4.6 billion years old.

The blue and orange clouds in the image outline cavities created as material shoots away from the protostar and collides with the surrounding matter, the release noted.

The nebula’s vibrant colors are only visible in infrared light detected by Webb’s Near-Infrared Camera, or NIRCam. Infrared light is invisible to the human eye, making Webb particularly essential to revealing otherwise hidden aspects of the universe.

The blue areas are where the dust is thinnest. The thicker the layer of dust, the less blue light is able to escape, creating pockets of orange.

“Shocks and turbulence inhibit the formation of new stars, which would otherwise form throughout the cloud. As a result, the protostar dominates the space, taking much of the material for itself,” according to the news release.

The protostar doesn’t yet generate its own energy through nuclear fusion of hydrogen, an essential characteristic of stars. Its shape — a puffy clump of hot gas somewhere between 20% and 40% of the mass of our sun — is also unstable.

The image provides context for what our sun and solar system looked like in their infancy.

Webb, which first began sharing new perspectives on the universe in July, is an international partnership between NASA, the European Space Agency and the Canadian Space Agency.