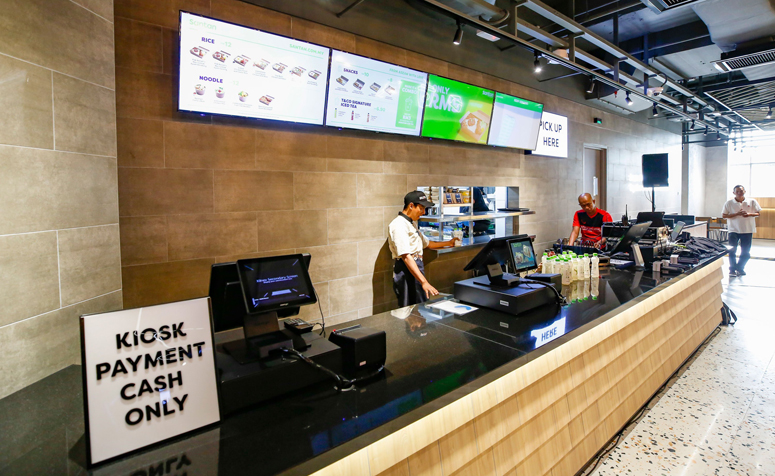 Out of the many repulsive things about air travel, airline food probably ranks high. But not for AirAsia. (AirAsia)

(CNN) — Out of the many repulsive things about air travel, airline food probably ranks high. But not for AirAsia.

Asia’s largest low-cost carrier is betting people love its food so much that it opened its first restaurant on Monday, offering the same menu it sells on flights. It’s not a gimmick, either: AirAsia, based in Malaysia, said it plans to open more than 100 restaurants globally within the next five years.

The quick-service restaurant’s first location is in a mall in Kuala Lumpur. It’s called Santan, meaning coconut milk in Malay, which is the same branding AirAsia uses on its in-flight menus.

Entrees cost around $3 USD and include local delicacies such as chicken rice and the airline’s signature Pak Nasser’s Nasi Lemak dish, a rice dish with chilli sauce. Locally sourced coffee, teas and desserts are also on the menu.

“We have seen a significant appetite for our in-flight menu offerings beyond our flights across the region and this is our answer to that demand,” the brand’s general manager Catherine Goh said in a press release.

AirAsia hopes its Asian-specific food will attract people over its western competitors. It’s also part of the company’s broader plan to become a lifestyle brand, according to a recent interview CEO Tony Fernandes gave to Nikkei.

Malaysia and neighboring southeastern Asian countries are increasingly attracting American restaurants. Domino’s Pizza plans to have 300 locations in Mayalsia by next year, KFC has 700 restaurants and growing and McDonald’s recently announced a $300 million investment in the region to grow to more than 400 restaurants.

AirAsia is also the first airline to bring its in-house food offerings to the ground. Typically, airlines attract high-end chefs from restaurants to craft in-flight menus. For example, JetBlue partnered with New York-based Saxon and Parole for its meals, and British Airways offers items for sale on some of its flights from regional retailer Marks and Spencer.