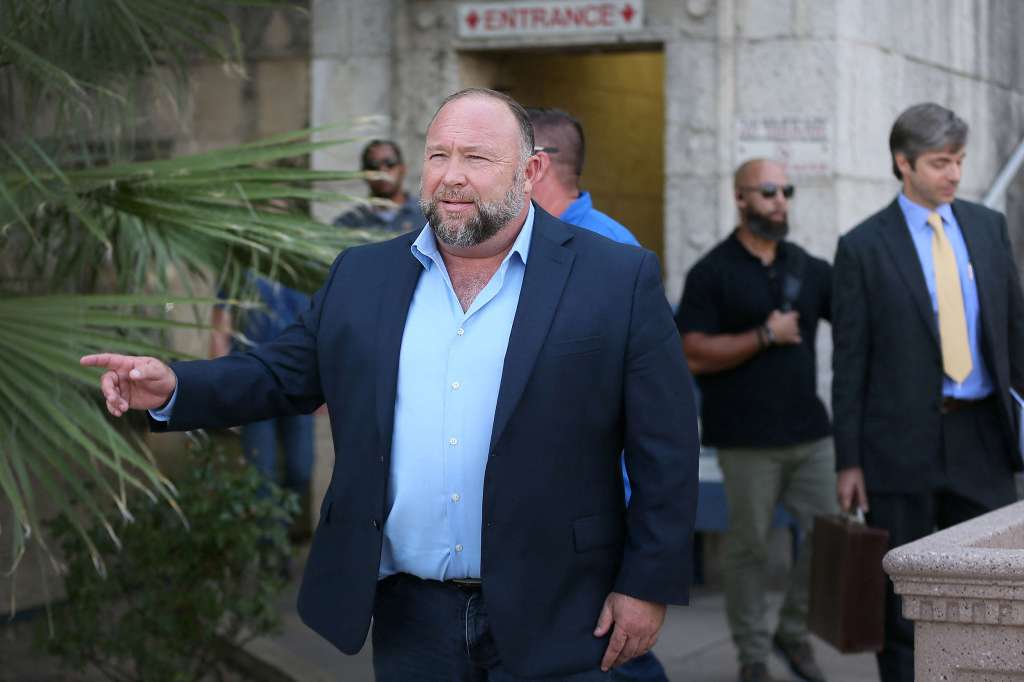 Alex Jones, the far-right conspiracy theorist who falsely promoted the lie that the 2012 Sandy Hook school shooting was a hoax, was expected to take the stand on September 22, in a trial that will determine how much he will have to pay the victims families . Credit: Briana Sanchez/Poo/Reuters/FILE

(CNN) — Alex Jones, the notorious far-right conspiracy theorist who falsely promoted the lie that the 2012 Sandy Hook Elementary School shooting was a hoax, was grilled on the stand Thursday at a defamation trial in Connecticut that will determine how much he will have to pay the families of victims who sued him and won.

Jones, who has sought to portray himself as a victim of an elaborate “deep state” conspiracy against him, was confronted during his testimony with some of his past unhinged rhetoric assailing the judicial system.

Christopher Mattei, a lawyer representing the Sandy Hook families, compelled Jones through questioning to acknowledge to the jury that he had referred to the proceedings as those of a “kangaroo court” and called the judge a “tyrant.”

The line of questioning by Mattei appeared aimed at showing the jury how little regard Jones had for the court.

The trial is taking place a month after a Texas jury determined that Jones and his company, Free Speech Systems, the parent of Infowars, should award two parents nearly $50 million.

Jones baselessly told his audience in the aftermath of the Sandy Hook Elementary School shooting that the incident was staged. He has since acknowledged the shooting occurred, but only after the lawsuits were filed. He said in a 2019 sworn deposition that a “form of psychosis” caused him to make his false comments.

In the Connecticut case, where Jones is being sued by eight more Sandy Hook families, Judge Barbara Bellis issued a default judgment against the Infowars founder in November 2021 after he failed to comply with court orders.

In court Thursday, Mattei brought up how Jones has been bothered when false statements have been made against him, noting that the Infowars founder took legal action in the past when he felt he was defamed.

The attorney argued to the jury that the lies Jones told about the families of Sandy Hook victims were far more damaging than the commentary that had bothered Jones and prompted his legal action.

Mattei, who has argued during the trial that Jones pushed the Sandy Hook lie because it was profitable, also questioned Jones about whether he was using the trial as a marketing stunt to sell products to his loyal fan base.

Several lines of questioning from Mattei prompted outbursts from Jones, in violation of court rules which require him to answer questions in a “yes” or “no” fashion. Bellis, the judge, repeatedly reminded Jones to obey the rules.

Because the judge already ruled that Jones is liable, the jury is determining the amount in damages to award the plaintiffs. While the families have not specified a dollar figure, an attorney for the families asked jurors last week to “send a message” to the public with its decision.

Plaintiffs in three Connecticut lawsuits against Jones, including family members of eight school students and employees and one FBI agent who responded to the scene, have all been condensed into the trial that commenced earlier this month.

Norman Pattis, Jones’ attorney, has argued that the claims made by the Sandy Hook plaintiffs are “exaggerated.” Pattis has also said the Sandy Hook families have “become partisans” and said the defense will argue the harm has been overstated “because they want to silence [Jones] for political reasons.”