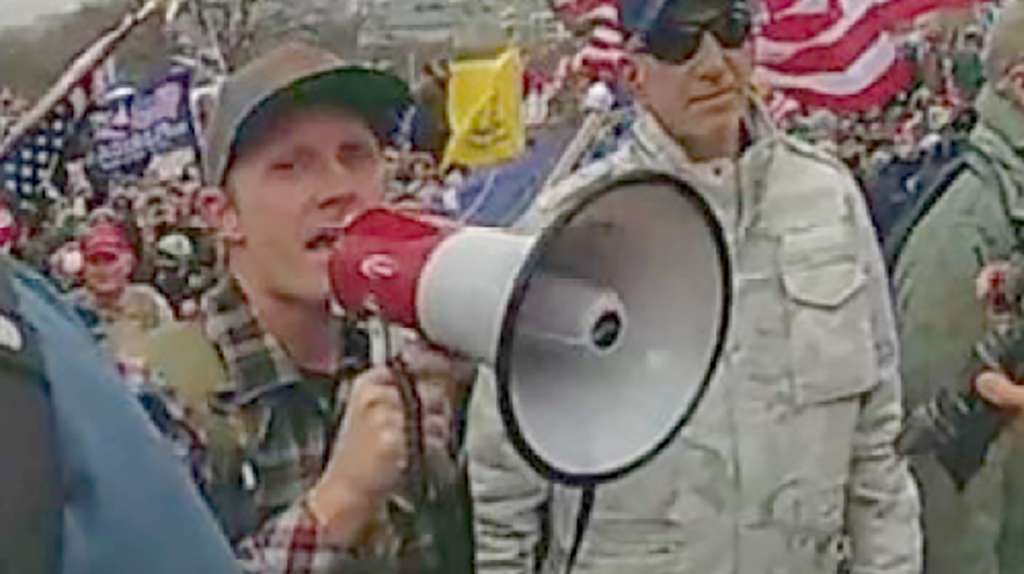 Body worn camera obtained from the Metropolitan Police Department shows McHugh interacting near a police barricade at approximately 1:30 pm with a megaphone. Credit: U.S. District Court for the District of Columbia

(CNN) — A Trump supporter accused of storming the US Capitol and heckling police officers for “protecting pedophiles” previously served jail time after being convicted in the statutory rape of a 14-year-old girl, according to court records reviewed by CNN and lawyers involved in the cases.

Federal prosecutors say Sean McHugh of Auburn, California, fought with police as they fended off the massive mob of Trump supporters outside the Capitol on January 6. During the scuffle, McHugh was recorded by police body-worn cameras heckling the officers with a megaphone.

According to prosecutors’ description of the footage, McHugh allegedly shouted, “You guys like protecting pedophiles?” “you’re protecting communists,” “I’d be shaking in your little s–t boots too,” and, “there is a Second Amendment behind us, what are you going to do then?”

His comments about “pedophiles” are particularly striking, considering his criminal history.

McHugh was convicted in 2010 on a state charge of unlawful sex with a minor, according to California court records reviewed by CNN and lawyers involved in McHugh’s cases. McHugh was sentenced to 240 days in jail — though he served less — and got four years of probation.

There was DNA evidence that connected McHugh to the girl, former prosecutor Todd Kuhnen told CNN. The victim was 14 years old and McHugh was 23 when the crime occurred, Kuhnen said. The victim also alleged that she was intoxicated when the incident occurred.

McHugh pleaded no contest to the underage sex charge. Kuhnen said he didn’t take the case to trial because he didn’t want to “run the victim through the ringer again,” and said that the victim and her mother signed off to the plea agreement as part of California’s victims’ rights law.

Role in the riot

McHugh has been charged with eight federal crimes tied to the Capitol insurrection, including trespassing charges and the more serious counts of obstructing congressional proceedings and assaulting police officers with a dangerous weapon. He hasn’t yet entered a plea in court.

Prosecutors allege that McHugh used a megaphone to incite other rioters outside the Capitol by calling on the crowd to advance on a police line. As the rioters grew more hostile, McHugh allegedly grabbed a large metal Trump sign and urged the mob to push it into the officers.

RELATED: ‘I thought I was going to lose my life’: Capitol Police officers share their harrowing January 6 stories for the first time

Once he reached the scaffolding that was set up for the inauguration, McHugh deployed an “unknown” chemical spray against police that he had kept holstered at his hip, prosecutors said.

He has been in jail since his May 27 arrest, a federal judge in the Eastern District of California ruled Tuesday that he should be detained before trial because he poses a threat to the public. His lawyers said in a court filing Thursday that they’ll try again to secure his release.

“I don’t think he should be detained,” said Lexi Negin, a public defender who represented McHugh at his initial court appearances in Sacramento, California. “He’s been out for five months… he has been working and living his life. Nothing is going on. To hold someone as a danger or risk of flight under those circumstances is completely against the Constitution.”

McHugh’s comments about police supposedly “protecting pedophiles” inside the Capitol might be a reference to QAnon — a far-right movement that believes the baseless conspiracy that Democratic officials and liberal figures are Satan-worshipping pedophiles who control the world. Many Capitol rioters supported QAnon and thought Trump was destined to defeat the cabal.

Negin said she is not aware of any information connecting McHugh to the QAnon movement.

At the time of the riot, McHugh was on probation for misdemeanor convictions for driving under the influence and driving with a suspended license, according to federal court documents.

McHugh has a long rap sheet of misdemeanor convictions, including multiple DUIs and trespassing offenses, according to Negin and a CNN review of California state court records. He is one of many rioters with criminal records, and he is one of a few rioters who were on probation or parole for other unrelated crimes when they went to the Capitol on January 6.

This undercuts recent false claims from some Republicans, who have whitewashed the violent attack and claimed that the rioters were well-meaning patriotic Americans with clean records.

Republicans pushed this lie at a recent House hearing about Capitol security failures. Arizona Rep. Paul Gosar complained that “the FBI is fishing through homes of veterans and citizens with no criminal records” and claimed “law-abiding citizens” were being targeted. Texas Rep. Louis Gohmert also recently said on the House floor, “their only crime was supporting Donald Trump.”

At least 460 Americans from 44 states and Washington, DC, have been charged in the attack.