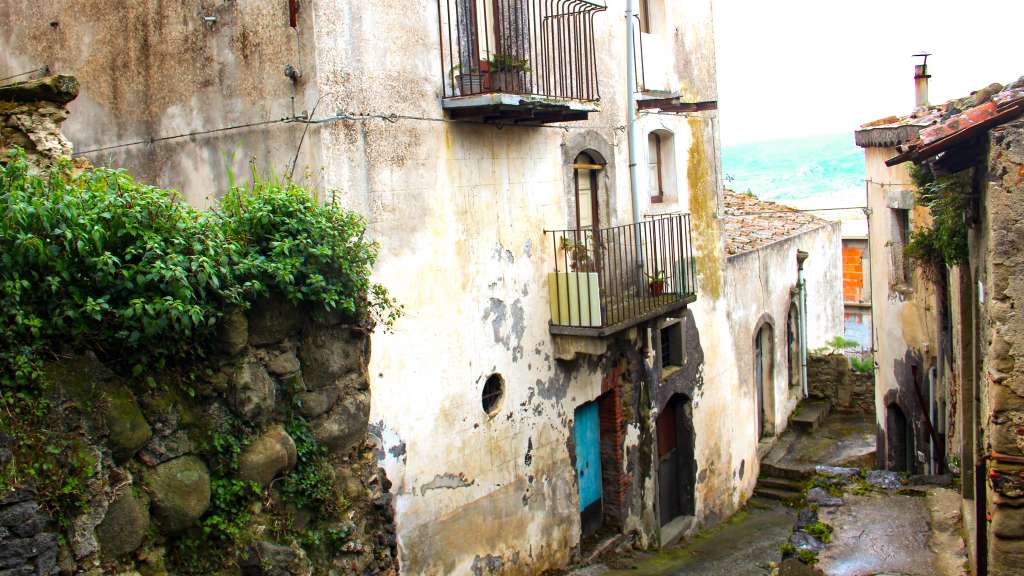 (CNN) — The pandemic is raging, quarantine rules are changing by the day, and there’s still uncertainty over when we might vacation again, but one thing remains constant in the travel world: the €1 houses of Italy.

This month, it’s the turn of another Sicilian town, Castiglione di Sicilia, to offer houses for the price of a coffee.

On the slopes of Mount Etna, near chic Taormina and the beaches of Sicily’s east coast, the town is selling a bumper crop of houses: roughly 900 abandoned homes.

Mayor Antonino Camarda has undertaken an ambitious project to breathe new life into his village where the population has shrunk from 14,000 in the early 1900s to barely 3,000 today.

“We have a huge architectural heritage to rescue, packed with history. Over time, too many people have left, leaving behind a bunch of old, picturesque houses, many even dating back to the Renaissance,” he says.

Where some other towns operating similar schemes have put together a job lot of houses for €1, Castiglione di Sicilia is pricing the properties according to their condition.

“We’ve carried out an in-depth study cataloguing each property based on maps and land registry data. According to their conditions buildings will be sold at different prices, starting from €1,” says Camarda.

If there’s a lot of interest for the same property, an auction will be held.

The scheme, which launched in March 2021, is the largest of its kind, with at least 400 properties in the town that are in a decent shape and require minimal renovation.

Want to snap one up? Potential buyers should get in touch with a detailed plan of what kind of house they’d like, and how they’d renovate it, in order to best match demand with supply, and help liaise between parties. A special task force has been set up to oversee the project.

“We are moving along two parallel paths: reaching out to old owners who are showing great interest in getting rid of their family homes, and new buyers,” says Camarda.

“We have already received many emails from investors and people across the world. There’s a wide choice here.”

So what’s the catch? Buyers must complete renovations within three years. Unlike most other schemes, however, there’s no deposit payable to guarantee doing the works.

Instead, they require owners to take out an insurance policy from a bank, worth €4,000.

“It would cost the new owner €100 per year, which seems a fairer sum then a deposit guarantee,” says Camarda.

Local taxes are low in Sicily compared to the rest of Italy. Buyers can also take advantage of the Italian government’s “superbonus” scheme, that dishes out tax credits of 110% for renovations which make houses more environmentally friendly.

Lava, lions and lots of wine

Perched on a rocky cliff on the northern slope of Mount Etna, Castiglione di Sicilia overlooks the breathtaking Alcantara valley, whose deep chasms and canyons are dubbed “gole” (meaning “gorges” in Italian.)

On the jet-black fertile flanks of Etna, vineyards make premium bottles with indigenous grapes including carricante, catarratto and nerello. Castiglione is dubbed the “city of wine” — a huge sculpture of a barrel and wine glass stands at the entrance to the village. Guided tours are organized along the Etna wine route.

Castiglione di Sicilia is said to have been founded on the ashes of prehistoric settlements in 403 BC by refugees from the seaside settlement of Naxos, near modern Taormina, when it was conquered by a tyrant.

Its name derives from “the Castle of the Lions,” and Castiglione’s coat of arms still features two lions standing guard. For centuries it was a vibrant and powerful fiefdom and one of Sicily’s strategic and most prosperous outposts, nicknamed the “fiery” town by Frederick II, the 13th-century Holy Roman Emperor and king of Sicily.

The town is a member of I Borghi Più Belli d’Italia, an association of some of Italy’s prettiest historical towns. Roads and walls are made with dark lava rock cobblestones, while aristocratic mansions are juxtaposed with humble dwellings.

“Our territory is vast and goes from the snow-capped peak of Etna all the way downhill, close to the sea. There are lots of things to do and beautiful spots to see”, says Camarda.

Racked along the hillside, the town is divided into several districts set at different altitudes. The old center is a maze of arched cobbled alleyways, and buildings featuring decorated portals with gargoyles. Giudecca, the Jewish quarter and one of the oldest areas of town, is packed with clusters of abandoned stone houses with thick, if ruined, walls.

Most of the empty buildings in this area have a unique look, shaped like little turrets, with various entrances from different streets for the multiple families who used to live in them.

Houses for sale line the main road that winds uphill to the majestic castle which crowns the town, and a panoramic piazza paved with lava stones.

There’s a range of properties for sale. The €1 homes tend to be dilapidated cottages once owned by shepherd and farming families, while the more expensive options include elegant little palazzos where the rural bourgeoisie lived. Vegetation emerges from windows and through the roofs of the ruined houses, and doorsteps are covered in moss and prickly pear branches. Decorated doors swinging off their hinges, and flower-patterned wrought iron balconies show the glory of past times.

Many former residents of the town migrated to Australia and South America in search of a brighter future. Their descendants never returned, allowing the family homes to fall into oblivion.

“Based on the population and land registry we’re tracking down many heirs by word of mouth, knocking at the doors of elders who are still in contact, or know where those families migrated to. It’s a small place — people know each other”, says Michele La Rosa, a member of the mayor’s special task force.

The closest beach is Marina di Cottone, a 40-minute drive away, with a long strip of sand and dunes ideal for families with kids.

In the evenings, the locals have a glass of Etna wine accompanied with local hazelnuts, almonds and pistachios. Meanwhile, the summer food and wine festivals pull in the gourmands. Every August 10, the town holds a “Chalices of Stars” wine tasting evening with top producers, to celebrate the famously clear night of Saint Sylvester, said to be good for watching shooting stars.

Sold? For more information and an application form, hit up the project website.