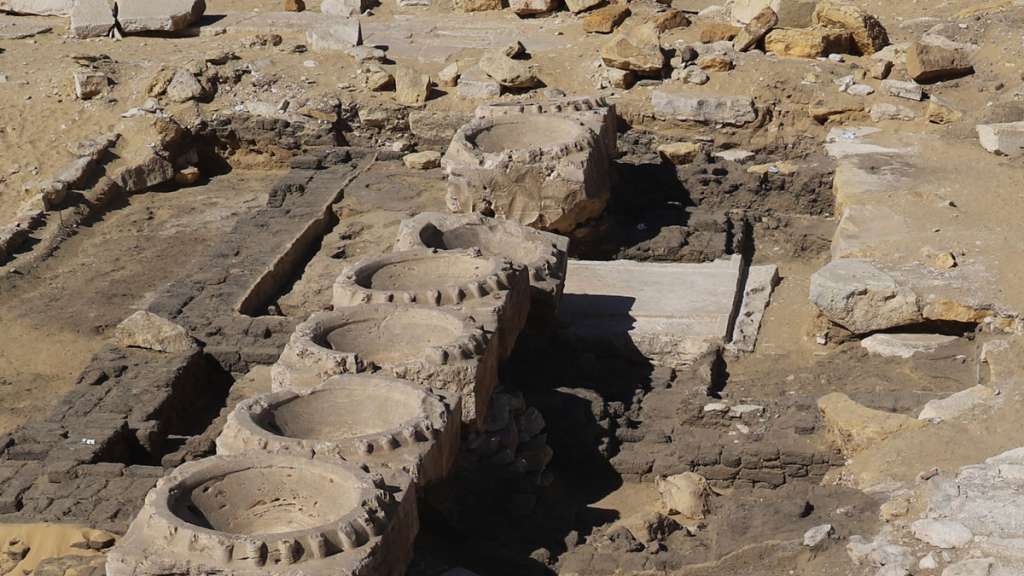 (CNN) — Archaeologists have uncovered what they believe to be one of Egypt’s lost “sun temples,” dating from the mid-25th century BCE.

The team uncovered the remains buried beneath another temple at Abu Ghurab, around 12 miles south of Cairo, mission co-director Massimiliano Nuzzolo, an assistant professor of Egyptology at the Polish Academy of Sciences’ Institute for Mediterranean and Oriental Cultures in Warsaw, told CNN on Monday.

In 1898, archaeologists working at the site discovered the sun temple of Nyuserra, also known as Neuserre or Nyuserre, the sixth king of the 5th dynasty, who ruled Egypt between 2400 and 2370 BCE.

Now discoveries made during the latest mission suggest that it was built on top of the remains of another sun temple.

“The archaeologists of the 19th century excavated only a very small part of this mud bricks building below the stone temple of Nyuserra and concluded that this was a previous building phase of the same temple,” Nuzzolo told CNN in an email.

“Now our finds demonstrate that this was a completely different building, erected before Nyuserra,” he said.

The finds include seals engraved with the names of kings who ruled before Nyuserra, which were once used as jar stoppers, as well as the bases of two limestone columns, which were part of an entrance portico, and a limestone threshold.

The original construction was made entirely of mud bricks, said Nuzzolo, whose team also found dozens of intact beer jars during the dig. Some of the jars are filled with ritual mud, which was only used in specific religious rituals, he added, and the pottery has been dated to the mid-25th century BCE, a generation or two before Nyuserra lived.

The mud brick monument “was impressive in size,” said Nuzzolo, but Nyuserra ritually destroyed it in order to build his own sun temple.

While these temples were dedicated to the cult of the sun god Ra, the king legitimized his power through the temple and presented himself as the only son of the sun god on the Earth, he said.

“Indirectly, therefore, the main purpose of the temple was that of being the place for the deification of the living king,” said Nuzzolo.

Historical sources suggest six sun temples were built in total, but only two had previously been unearthed, said Nuzzolo. From these sources we know that the sun temples were all built around Abu Gharab, he added.

Nyuserra’s sun temple has a very similar layout to the mud brick building but is larger and made of stone, Nuzzolo said.

The mud brick building would not have been built by Nyuserra, he added, because Egyptian kings are not known to have built temples with the bricks and then rebuilt them later using stone.

“Usually it happens that when a king for some reasons is in a hurry he builds the monument in mud bricks with key elements in stone,” said Nuzzolo, who believes that these findings make it “very likely” that some of the remaining sun temples were also built using mud bricks with a few stone elements.

“This may have facilitated their disappearance during the course of the centuries, as it occurred to several other ancient Egyptian monuments built with the same perishable material,” he said.

“Moreover, mud bricks building can be easily demolished and buried under other constructions, as it probably happened in our case.”

The team hopes to find out which king was responsible for building the temple through further excavations at the site, he said.

Studying the pottery, in particular, will allow them to find out more about how people lived at the time, Nuzzolo added, including what they ate and what they believed.

Nuzzolo and the team’s discovery featured in the show “Lost Treasures of Egypt” on National Geographic, which aired Sunday.

The dig is part of a joint mission by the University of Naples L’Orientale and the Polish Academy of Sciences.