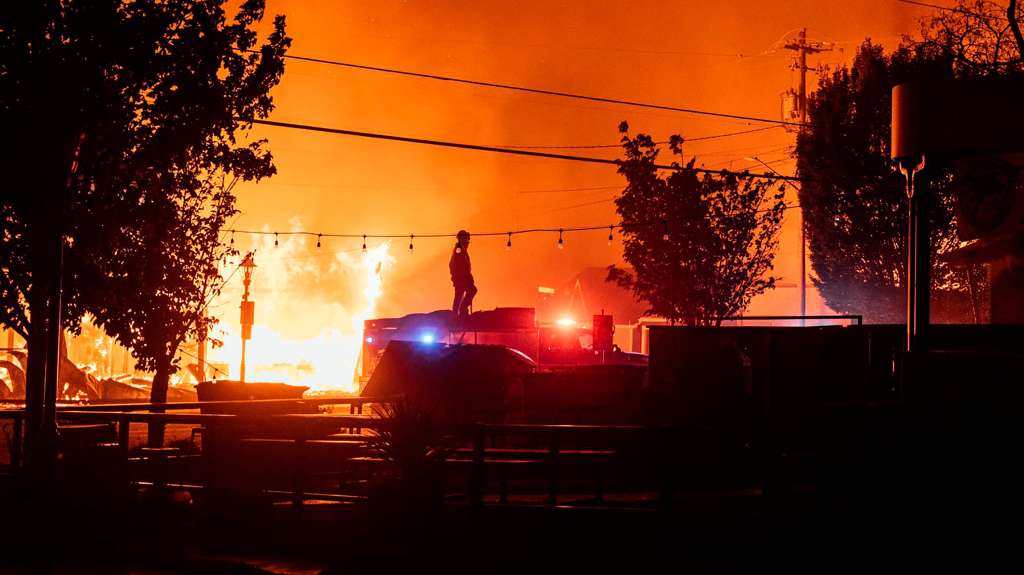 “We tried to get all our personal belongings. And I told our kids, ‘It’s time, and our lives are in danger now.’ It’s just a horrible experience, seeing this fireball headed toward us. It was devastating.”

Soon, his farm was engulfed in flames. But his family was lucky. At least 36 people have died in the Western wildfires, which have torched more than 4.7 million acres. That’s more land than six Rhode Islands.

The National Interagency Fire Center said at least 87 wildfires are burning in 11 states. Many are filling the sky with choking smoke and pushing firefighters beyond exhaustion.

“We have so many brave firefighters who are working unending hours to try to contain these fires,” Sacramento Mayor Darrell Steinberg said Tuesday.

“We are living through an unprecedented situation here on the West Coast and in California.”

Before Campos and his family fled, “we went down the street to help a neighbor rescue eight horses,” Campos said.

“We grabbed nine dogs. We helped get some chickens out — I think there were about nine or 10 chickens,” he said. “It’s a real tight community, and we worked together to rescue animals before we left this place.”

22 people are missing in Oregon

“His home was completely lost, and his shop,” Fogarty said, holding photos of his friend.

Atiyeh is among at least 22 people missing in the Oregon wildfires, which have already killed 10 people in the state.

And authorities fear more deaths. A mobile medical examiner facility has been set up in Linn County due to wildfires in the area, Oregon State Police spokesman Timothy Fox said.

He said this is the first time a mobile morgue of that kind has ever been needed.

The 36 victims include a boy and his grandmother

At least 25 people have died in the California wildfires. The most deadly, the North Complex Fire, has claimed 15 lives and grown to more than 260,000 acres across four counties.

At least 10 people have been killed in Oregon, Gov. Kate Brown said. They include 13-year-old Wyatt Tofte and his grandmother, Peggy Mosso.

And in Washington state, one child was killed, Gov. Jay Inslee said.

Oregon Emergency Management Director Andrew Phelps urged those who are evacuating to register with the American Red Cross so officials and loved ones will know they’re safe.

“If you’re concerned for missing family, please report that concern to the local law enforcement entity,” he said.

Virtually all of Washington is covered by ‘dangerous’ smoke

In fact, The West Coast now has the worst air quality in the world.

Of the nine major wildfires burning in Washington state, the two largest — the Pearl Hill and Cold Springs fires — have collectively scorched more than 412,500 acres, according to the Washington State Department of Natural Resources.

‘”This is such a disaster in any dimension, but a particular disaster because we had our state turned into a tinder box by climate change,” Inslee said.

“We have grass now that’s almost like gasoline. A spark will make it explode. We have fires that just create walls of fire 20, 30 feet high from grass and sage brush.”

The grass and sage brush fires have “consumed whole towns,” the governor said.

Malden, in eastern Washington, saw 80% of its buildings destroyed in a firestorm Labor Day weekend.

California Gov. Gavin Newsom, Los Angeles Mayor Eric Garcetti and Washington’s Inslee have all reiterated that the fires in their states are the result of the climate crisis, disputing President Donald Trump’s claim that they’re the result of poor land management.

Newsom said record-breaking temperatures and drought conditions, which have fueled the recent fires, have been going on for years because of climate change.

“Climate change is real,” said Newsom, who met with Trump on Monday.

Newsom said he reminded the President that 57% of the forested land in the state of California is under federal jurisdiction, while just 3% is under the state’s control.

He said it should be the joint responsibility of the state and federal government to do more on vegetation management and forest management.

“We can’t do this alone,” Newsom said. “We’re going to need the federal government to step up in substantial ways.”

Garcetti echoed that sentiment Monday and said he believes Trump is blaming the state due to political motivations.

“Our federal agencies do step up and do help us and do know that we need their assistance,” Garcetti said.

“The leader at the very top continues based on the electoral map to either, you know, put down California for not raking enough,” he said.

“He (Trump) doesn’t say anything like that in a swing state. In the Gulf Coast, he doesn’t assign the blame for the hurricanes or anything that they have done. It seems partisan at a moment that we should be non-political and that we should be finding our common ground in America.”

“Denial doesn’t work when it comes to climate,” Garcetti said. “The cost of denial is that people lose their lives and their livelihoods.”