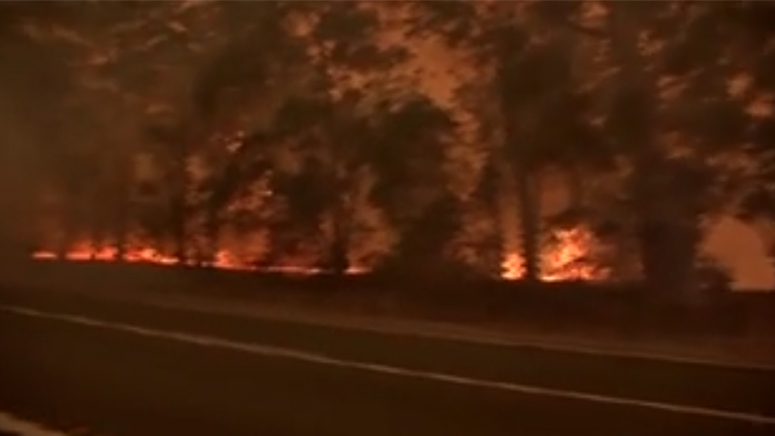 There’s an increasingly bitter face-off between those who say arson and those who fault climate change.

Each side has powerful backers and their weapons of choice are often fabrications and part-truths that have spread in time with the fires in recent weeks.

Humans burning fossil fuels and humans with criminal intent who torch a combustible landscape both factor into this unprecedented crisis.

But just how to accurately apportion the blame has become a big political issue. The debate is made hotter by many — including some Australian lawmakers — who argue against deeper cuts to carbon gas emissions.

Firefighters blame lightning strikes for most of the major blazes in New South Wales and Victoria states, and many scientists say climate change is the main reason for fires that have claimed at least 33 lives since September, destroyed more than 3,000 homes and razed more than 1 0.6 million hectares (26.2 million acres ).

Still, the arson side often cites repeatedly on social media a debunked statistic that says more than 180 suspected arsonists have been arrested.

“Truly Disgusting that people would do this! God Bless Australia,” President Donald Trump’s son Donald Trump Jr. tweeted. “More than 180 alleged arsonists have been arrested since the start of the bushfire season,” he added.

Although it’s been discredited by AAP FactCheck, the fact-checking division of news agency Australian Associated Press, the statistic has been repeated thousands of times online.

A AP FactCheck, a partner in Facebook’s Third Party Fact Checking program, looking at misinformation on Facebook and Instagram, links the statistic to a statement by police in New South Wales — the worst fire-affected state — that said “legal action” had been taken against 183 people since November for “bushfire-related offenses.”

These included only 24 people charged over “deliberately-lit bushfires.” Legal action — which includes cautions — had also been taken against another 100 people for conduct that could be described as being careless during a fire ban. The statement did not detail the offenses alleged against the remaining 59 suspects.

Climate change is the main reason for the current extraordinarily destructive fire season, according to Janet Stanley, a director of Australia’s National Center for Research in Bushfire and Arson.

“In the past, there’s been little interest generally in why people light fires — whether it’s purposefully or accidentally or maliciously or recklessly — because climate change hadn’t kicked in and it really wasn’t such a problem because fire could fairly easily be put out,” said Stanley, who has studied arson-related wildfires for three decades.

“But because of climate change, this is not the case now. The conditions that make a fire very big and dangerous and spread quickly are now a great deal worse, so it’s much harder to put out the fire once it occurs than it was in the past,” she added.

Arson has long been part of Australia’s wildfire seasons, but it’s hard to estimate how big a problem it is because crime scenes are often remote and evidence is frequently destroyed.

The New South Wales Bureau of Crime Statistics and the Victorian Crime Statistics Agency won’t release their arson data for the current wildfire season in the two worst-effected states until March.

Swinburne University of Technology arson expert Troy McEwan cautioned that three fires that killed 42 people in Victoria during a wildfire emergency in 2009 had initially been wrongly blamed on arson.

“Certainly a significant proportion of bushfires are deliberately lit in Australia,” she told Australian Broadcasting Corp.

“It’s important to note that most of these fires have been caused by little Lucifers running around with matches and fire-starters and creating havoc,” McCormack told reporters, referring to child arsonists, while acknowledging that climate change was also a factor in the fire emergency.

McCormack’s rural-based party, the Nationals, is staunchly against any action on climate change that would carry an economic cost, such as making polluters pay for the carbon gases that they emit.

Some lawmakers in Prime Minister Scott Morrison’s conservative Liberal Party publicly dispute any link between climate change and the fires.

A common theme being spread by those looking to exaggerate Australia’s contribution to global warming “was that the fires are basically spontaneously occurring because the carbon dioxide in the air is exploding,” said Craig Kelly, a conservative lawmaker. “That’s nonsense.’”

“There are groups in our society that have exploited these bushfires to push their own political barrow. The climate change alarmists want to hijack the debate and use these fires as an example,” Kelly added.

A widely circulated online image purporting to be a NASA satellite photograph shows the wildfires, which are largely confined to southern Australia, extending across the country’s tropical north coast. The creator of the image, Anthony Hearsey, explained on his website that it was a digital compilation of almost eight months of NASA fire data and that not all the fires were still burning, but those qualifications were lost online.

Singer Rihanna tweeted the dramatic image to her many followers with the comment: “devastating”

Tourism Australia, a government agency tasked with promoting the country overseas, has included its own fire map on its website to counter online images suggesting much more of the country is ablaze.

Queensland University of Technology researchers Tobias Keller and Timothy Graham suspect automated programs called bots have been used to bolster the apparent popularity of #ArsonEmergency compared to other popular hashtags on the wildfires. The research doesn’t identify who is behind the campaign.

Keller, an expert on the spread of political messages on social media platforms, said the involvement of the U.S. president’s eldest child was an important achievement for those who overstate the arson problem.

“When someone like Donald Trump Jr. or any celebrity endorses such a narrative, it can gain traction very quickly because everyone looks at what these celebrities post on and what their opinions is and that can be very dangerous.” Keller said.