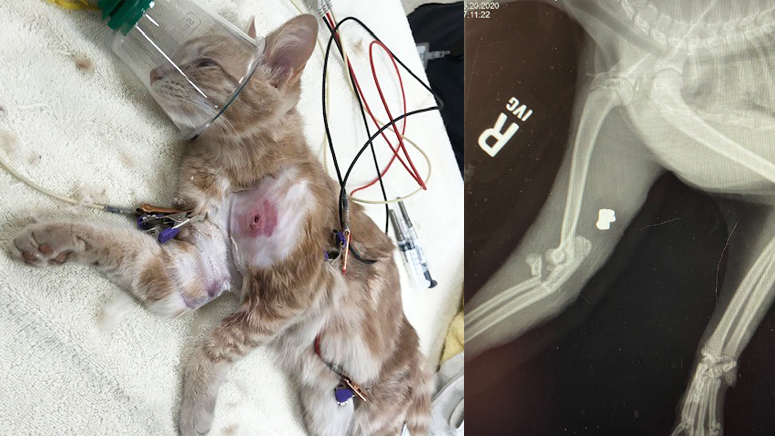 Courtesy of ARL of Boston

FRAMINGHAM, MASS. (WHDH) - Authorities launched an investigation after a 1-year-old cat was found shot and severely injured by a high-powered pellet gun in Framingham in late March.

A pellet passed through the left, front shoulder of the cat, named Piri, before becoming lodged in her right, front leg presumably along the 700 block of Waverly Street, a densely populated area, according to the Animal Rescue League of Boston.

Piri’s former owner found her covered in blood and in obvious pain.

The feline was taken to Boston West Emergency Veterinary Hospital in Natick, where X-rays revealed the pellet all but shattered Piri’s right elbow and caused shoulder damage on her left side, the ARL said. She also suffered a lung contusion.

Piri has since been transported to Metro West Humane Society in Ashland to continue her recovery.

The pellet could not be removed from the cat’s right leg, which she may lose. Her veterinary team is exercising extreme caution in regards to her medical plan.

“While COVID-19 has altered nearly every aspect of our daily lives, the Animal Rescue League of Boston’s (ARL) Law Enforcement Department remains undeterred in investigating and charging those responsible for acts of animal cruelty, neglect and abuse,” the ARL wrote in a press release.

Anyone with information on this act of animal cruelty is urged to contact ARL Law Enforcement at (617) 426-9170 or email cruelty@arlboston.org.