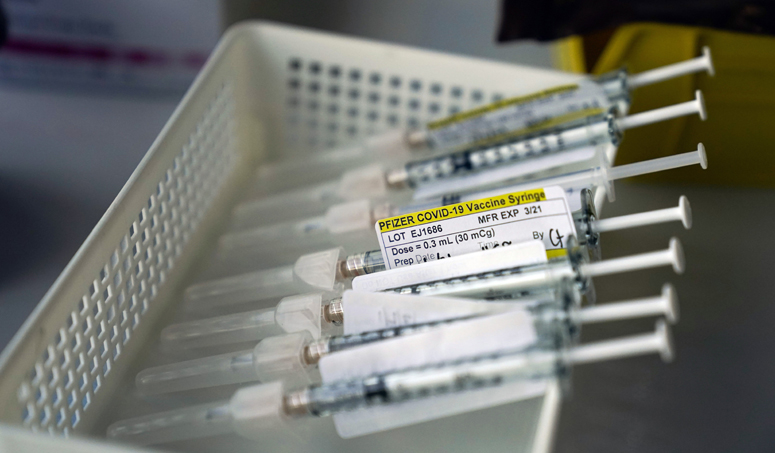 FILE - In this Jan. 7, 2021, file photo syringes containing the Pfizer-BioNTech COVID-19 vaccine sit in a tray in a vaccination room at St. Joseph Hospital in Orange, Calif. Taking a new direction to speed release of coronavirus vaccines, President-elect Joe Biden's office said Friday he would end the current practice of holding back vaccine doses to guarantee that people who get their first shot can also get a required second inoculation three weeks later. (AP Photo/Jae C. Hong, File)
State House News Service

The governor praised the state’s success so far in getting at least one dose administered to two-thirds of the adult population — through Thursday, the Department of Public Health reported 3,724,418 people had received at least one dose of the Pfizer or Moderna vaccine or the single-shot Johnson & Johnson vaccine, representing 67.7 percent of the 5.5 million adults in Massachusetts — and the fact that 99 percent of Bay Staters who receive one dose return for their second shots.

“Honestly, there’s not another state in the country with numbers like that,” Baker said. Vaccination rates are not even across Massachusetts communities, and Baker said officials will need to “adjust” to lift those that still lag behind as the rollout continues.

Teams have been knocking on doors and running pop-up clinics in some of the hardest-hit communities, including the 20 the Baker administration targeted in an equity campaign, and Baker said the state will likely decide to direct more resources to communities with the greatest needs going forward.

“We’ll continue to morph the delivery model, as we have from the beginning, to make it work for the populations that are left as we continue to work farther and farther into the community that remains that hasn’t been vaccinated,” Baker said.