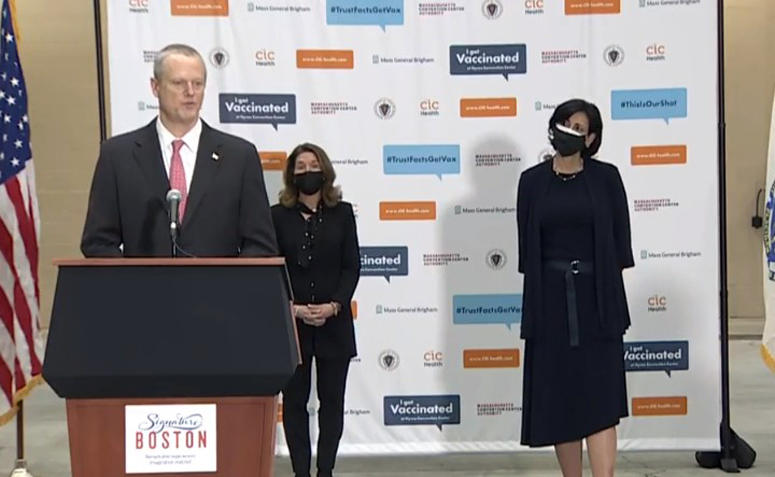 Touring the Hynes Convention Center where the Biden administration will begin delivering 42,000 doses of COVID-19 vaccine a week starting Wednesday, Gov. Charlie Baker acknowledged rising infection rates across Massachusetts and warned against letting a “false sense of security” settle in as vaccine distribution ramps up.

Baker was joined on Tuesday at the Boston vaccination site by Centers for Disease Control and Prevention Director Dr. Rochelle Walensky, who just a day earlier said she felt a sense of “impending doom” about the trajectory of the pandemic.

Walensky and other federal health officials have cautioned states against loosening their pandemic restrictions at this moment, but the former Massachusetts General Hospital infectious disease specialist would not say whether she thought Baker moved too quickly this month to reopen parts of the economy, encouraging larger gatherings of people at weddings and in places like theaters and ballparks.

“I’m not going to comment on individual states. What I will say is I’m really pleased to see everybody here is masked. Everybody outside is masked and people are doing their part to try to contain the virus here in Massachusetts,” Walensky said.

Walensky had a call with governors on Tuesday morning, and she said she urged those who had dropped their mask mandates to restore them. The public mask-wearing mandate remains in place in Massachusetts.

Baker’s approach to reopening has come under questioning from legislators and public health experts at home as well as COVID-19 cases counts begin to rise again across the state. The governor mentioned the trend on Tuesday as the reason “no one in Massachusetts can afford to let their guard down now,” but he did not backtrack on any of the decisions he has made so far.

The governor said most of the increased spread is being recorded among people 30 and younger, and he said hospitalizations continue to be well below where they were earlier this year. The greatest danger comes from informal gatherings, he said, meaning Passover and Easter could become spreading events if families are not careful.

Baker noted the state’s mask mandate and his decision to leave gathering size limits at private homes unchanged this month at 10 people indoors and 25 outdoors.

“Massachusetts has some of the strictest COVID-19 protocols in place and they’re there for a reason. We need everyone to follow them and embrace them,” Baker said.

Walensky said that across the United States 61,000 new cases being recorded daily, up 13 percent from last week. In Massachusetts since the beginning of March, the seven-day average of daily new cases of COVID-19 has increased 15 percent to 1,637 daily confirmed new cases.

“While we have so much hope on the horizon we are just asking you to hang on just a little bit longer,” Walensky said.

Walensky and Federal Emergency Management Agency Director Robert Fenton were in Boston on Tuesday to tour the Hynes Convention Center, which this week fully replaced Fenway Park as one of seven mass vaccination sites in Massachusetts and was chosen by FEMA to become one of 15 community vaccination centers across the country.

The inclusion of Hynes in the FEMA vaccination pilot program means the site will be receiving additional vaccine doses for the next eight weeks, increasing the site’s capacity to administer vaccines from 1,000 to 7,000 shots a day beginning on Wednesday.

Fenton said the plan is to support Hynes over the first six weeks of the program with Pfizer doses followed by two weeks of Johnson & Johnson vaccine.

“We’ll take every dose we can get,” Baker said.

The FEMA program also allows for up to one-third of the new doses to be deployed through mobile vaccination units, and Health and Human Services Secretary Marylou Sudders said the mobile program should be operational by next week, with doses being sent to Boston, Chelsea, Revere, Fall River and New Bedford.

On the tour of the Hynes, the Baker and Biden administration officials were joined by U.S. Sen. Ed Markey and U.S. Rep. Stephen Lynch.

Lynch and Markey a day earlier had toured the Shawmut Corporation facility in West Bridgewater together where they are manufacturing N-95 masks. Lynch, of South Boston, urged hospitals, schools and other organizations receiving millions in aid through the American Rescue Plan for the purchase personal protective equipment to buy masks, gloves, gowns and other equipment from vendors in the United States, not China.

Last Monday, people age 60 and older and certain workers became eligible for vaccinations as Baker said he and other governors were given assurances from the Biden administration that supply would steadily increase through the end of March and April.

The next phase begins Monday when people 55 and older or with one underlying health condition will become eligible, and the program opens to the general public April 19. To get an appointment at the Hynes, a resident needs to be preregistered with the state and the convention center must be the closest mass vaccination site to the person seeking an appointment.

Baker said the the biggest increase in supply of vaccine for Massachusetts last week came through the federally-supported retail pharmacy program, where the allocation of weekly doses to CVS Health and other locations went from 72,000 to 194,000.

The governor also said that the administration will continue to look for ways to approve its outreach to communities of color and hard-to-reach populations. Though the state has outpaced the national average with 20 percent of Black residents and 13 percent of Latinx residents receiving at least one shot, Baker said his team has “a lot more work to do.”

“We’ll continue to build on the efforts we have underway to make sure that every person in the Commonwealth who wants a vaccine has access to one, and this expansion here at the Hynes, in the heart of Boston, will certainly help us achieve that goal,” Baker said.