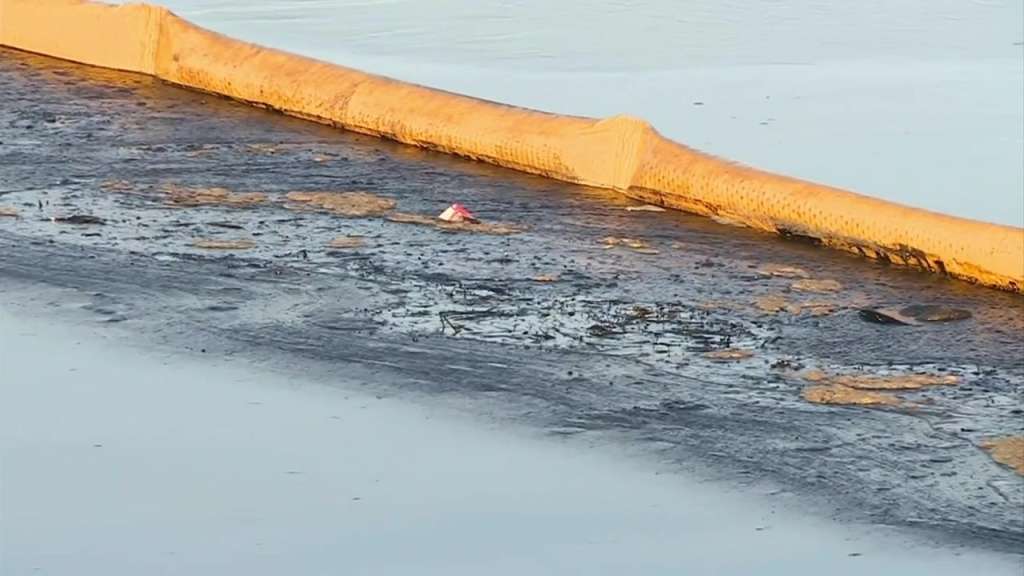 (CNN) — A stretch of Southern California’s coast has been transformed by a leak at an oil pipe that released more than 100,000 gallons of oil into the Pacific Ocean.

And a little farther south, teams in white hazmat suits worked to protect the fragile wetland ecosystem near the mouth of the Santa Ana River — a crucial habitat for migratory birds that is wrapped in shimmering oil ribbons.

Dead birds and fish have already washed ashore, according to Orange County Supervisor Katrina Foley who has been providing updates on Twitter.

On Monday, Gov. Gavin Newsom proclaimed a state of emergency due to the spill. “The state is moving to cut red tape and mobilize all available resources to protect public health and the environment,” he said in a statement.

The breach, widely reported Saturday, occurred about five miles off Huntington Beach in Orange County, spilling as much as 144,000 gallons of crude, according to an updated estimate from the city of Huntington Beach.

And while the cause is being investigated, there are also questions about the timeline of notifications.

California authorities were notified late Friday of reports of an oil sheen at the site of the pipeline spill, more than 12 hours before Amplify Energy Corp., the operator of the line, reported it to state and federal officials, according to documents reviewed by CNN.

But in a news conference Monday, Amplify CEO Martyn Willsher said a sheen was detected by company personnel Saturday morning, not Friday night. Willsher said while there is equipment to detect the leak without visibly seeing oil spills, there were no notices of a potential leak in the line before Saturday.

Amplify is a small, Houston-based company with 222 employees as of the end of 2018, the last time it reported its staff size in a company filing. Its most recent financial report shows sales of $153 million, with year-to-date losses of $54.4 million through the end of June.

The spill, which stretches from Huntington Beach to Laguna Beach, is likely to move farther south based on wind and currents, said Capt. Rebecca Ore, the Commanding Officer at U.S. Coast Guard Sector Los Angeles-Long Beach.

Response efforts to the spill have doubled since Sunday afternoon, Ore said Monday.

“This has devastated our California coastline in Orange County, and it’s having a tremendous impact on our ecological preserves as well as our economics,” Foley told CNN. “We need answers and the public deserves answers.”

It is unknown how many animals have died in the spill, Michael Ziccardi, Director of the Oiled Wildlife Care Network (OWCN) said at a press conference Monday.

“I had grave concerns about this impact,” he said. However, initial assessment shows a lower number of birds impacted than were feared.

So far, OWCN has captured four birds, including a pelican that had to be euthanized, he said.

The spill is just the latest such incident to hit California’s shores, including the 1969 spill of as much as 4.2 million gallons of crude oil near Santa Barbara. Locally, Huntington Beach bore the brunt of a 1990 spill of about 417,000 gallons of crude oil when an oil tanker ran over its anchor and punctured its hull.

The current spill’s volume pales in comparison to the most serious oil spills in history, including the 1989 Exxon Valdez oil spill in Alaska (11 million gallons) and the 2010 Deepwater Horizon spill in the Gulf of Mexico (134 million gallons).

For some, this latest incident is a sign of a need for change to protect the environment.

“As California continues to lead the nation in phasing out fossil fuels and combating the climate crisis, this incident serves as a reminder of the enormous cost fossil fuels have on our communities,” Newsom said Monday. “Destructive offshore drilling practices sacrifice our public health, the economy, and our environment.”

Investigation into the cause

The cause of the leak is not yet known. Willsher said Monday the company had isolated a specific spot along the pipeline that may be responsible.

“We are still assessing to look for the source and figure out,” Eric Laughlin, California Department of Fish and Wildlife spokesperson, said Sunday at a news conference. “It doesn’t appear there’s further fuel leaking, but we’re still working on identifying that.”

Authorities are examining whether a ship’s anchor could have caused the oil spill, said Capt. Ore.

“These ships are anchored and many are awaiting entry into the San Pedro Bay Port complex — the ports of Los Angeles and Long Beach — and in the course of transit it is possible that they would transit over a pipeline,” Ore said Monday.

The federal Bureau of Safety and Environmental Enforcement was assisting in Coast Guard-led response to the oil spill, the agency told CNN. Its role was to assist “in identifying the location and source of any spills and provide technical assistance to the Unified Command in stopping the spillage,” it said Sunday in a statement.

The National Transportation Safety Board was sending investigators to gather information and assess the source of the oil leak, it said Sunday on Twitter.