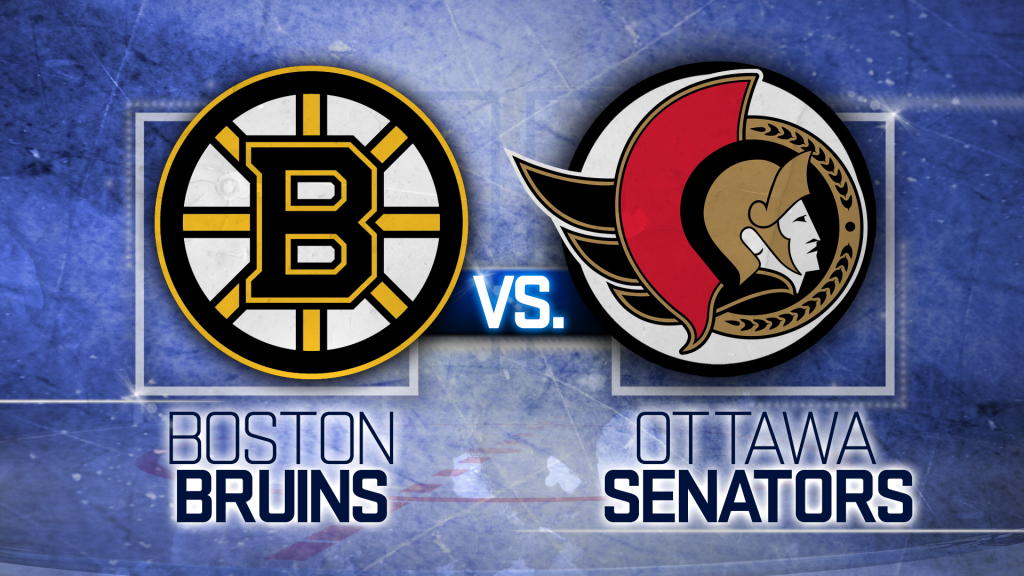 BOSTON (AP) — Patrice Bergeron scored the tiebreaking goal late in the second period and the Boston Bruins held on to beat the short-handed Ottawa Senators 3-2 on Tuesday night.

Brad Marchand and Derek Forbort also scored for the Bruins, who survived a sloppy start against a team that has been depleted recently by COVID-19.

“We knew they’re a young team that has a lot of speed and works hard,” Bergeron said. “That’s what they gave us. We weren’t necessarily prepared for it or ready for it from the drop of the puck, but I thought after that we got going and we played to our strength.”

The Senators, who canceled practice Monday for precautionary reasons, were without five players and an assistant coach who have been placed on the COVID protocol list.

David Pastrnak and Charlie McAvoy each had two assists, and Jeremy Swayman finished with 24 saves for the Bruins, who won for the 200th time under coach Bruce Cassidy and improved to 5-0 at home this season.

Zach Sanford and Nikita Zaitsev scored for Ottawa. Matt Murray stopped 33 shots for the Senators, who lost their fifth straight and for the eighth time in nine games.

Despite the patchwork lineup, the Senators pushed the Bruins for all three periods.

“Proud of the group, with the guys that were out and the effort that we gave,” Ottawa coach D.J. Smith said. “If we keep playing with that effort and that hunger, not only will wins come, but the morale in general will be better.”

Ottawa answered after falling behind 2-1 on goals by Marchand and Forbort, tying it again when Zaitsev took a shot from between the right circle and the boards and got it through Swayman, tying it at 2-all 13:09 into the second period.

But Bergeron, who scored four goals Thursday in a win over Detroit, put Boston back up 3-2 with 1:20 left in the second period. A pass from Pastrnak deflected off a broken stick right to Bergeron, who corralled it for a quick wrist shot and his fifth goal of the season.

“I was hoping that it wasn’t going to touch it,” Bergeron said of the broken stick. “When it did, I was just trying to make sure I was able to control it right away and try and surprise the goalie.”

The goal gave the Bruins some momentum heading into the final period, which was full of physical play and two Boston penalties that gave the Senators a chance to tie it. Ottaway finished without a goal on six power-play opportunities, but Smith said he liked the way his players responded once the Bruins started hitting.

“This wasn’t your typical November game,” Smith said. “I think the way we played made them get fired up and it was a really good hockey game.”

The Senators outskated the Bruins early and took a 1-0 lead just 1:14 into the game on a goal by Sanford. Swayman stopped the initial shot by Brady Tkachuk, but the Ottawa captain scrambled for his own rebound and pushed it across to Sanford as he drove the net and had plenty of space to tap in the puck. It was the first goal of the season for Sanford, a native of nearby Salem, Massachusetts.

Marchand tied it on a power-play goal 5:12 into the second period, deflecting in a shot by Pastrnak while Artem Zub served a penalty for a cross-check on Pastrnak.

Forbort, called out by coach Bruce Cassidy for a sloppy play that resulted in a goal Saturday during a loss at Toronto, beat Murray with a wrist shot 10:58 into the second period, giving Boston a 2-1 lead after a sluggish start.

Cassidy said it was nice to see the defenseman score for the Bruins, who have been relying too much on their top line of Bergeron, Marchand and Pastrnak.

NOTES: Cassidy is 200-86-41 behind the Bruins bench. … D Victor Mete was the latest Ottawa player to enter the COVID-19 protocol Tuesday, joining five teammates and an associate coach who were already on the list. Ottawa had call up a handful of players from Bellville of the AHL to fill out the roster: D Erik Brannstrom, RW Scott Sabourin, LW Egor Sokolov made his NHL debut and G Filip Gustavsson was recalled to back up Murray. … Senators G Anton Forsberg was out with a non-COVID illness.