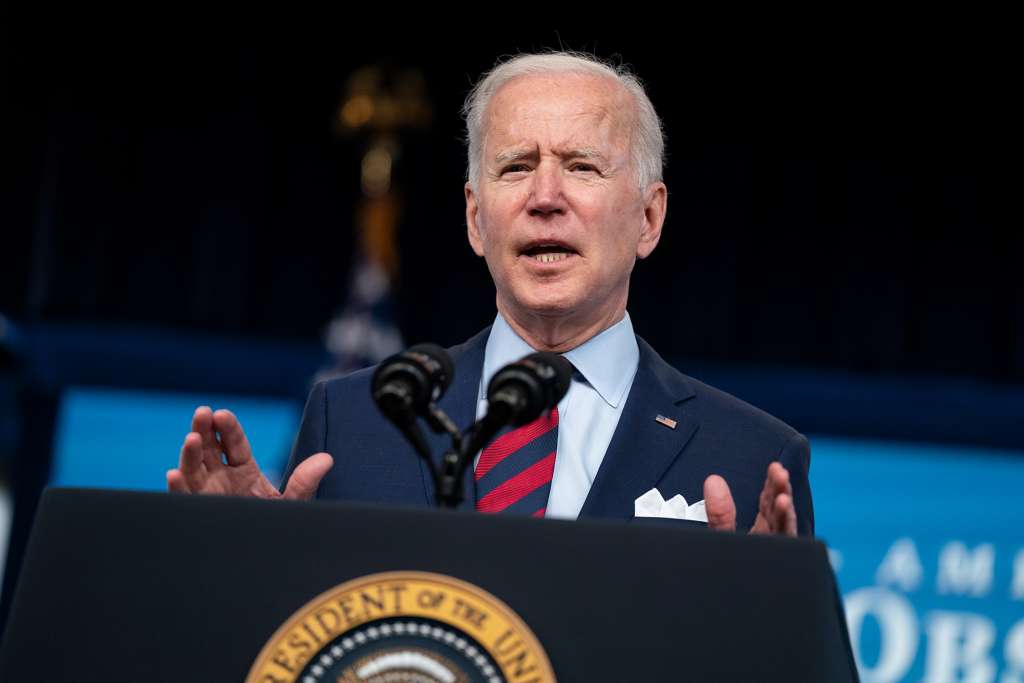 WASHINGTON (AP) — President Joe Biden used the 100th anniversary of Tulsa’s race massacre to make a plea for sweeping legislation in Congress to protect the right to vote as Republican-led governments in Texas and other states pass new restrictions making it tougher to cast ballots.

Biden, marking the centennial in Oklahoma on Tuesday, called out lawmakers in Congress — including two senators in his own party — for holding up action on voting bills. Invoking the words of the late Rep. John Lewis, Biden said the right to vote is “precious” and must be protected. He vowed that June will be a “month of action” on Capitol Hill as Congress considers the legislation, among the top priorities of his administration.

“We’re not giving up,” Biden said about the bill, S.1. “I’m going to fight like heck with every tool at my disposal for its passage.”

Republican legislators in state capitols across the nation are pushing what experts say is an unprecedented wave of bills aimed at restricting access to the ballot box. While Republicans say the bills are aimed at preventing voter fraud, Democrats contend that the measures are aimed at undermining minority voting rights in particular.

Most recently, the Texas legislature moved closer to passing a bill that would reduce early voting hours, tighten voter identification requirements for absentee ballots and eliminate ballot drop boxes and drive-thru voting centers. The bill was blocked only when Texas Democrats walked off the House floor on Sunday night, but Republican Gov. Greg Abbott has said he’ll order a special session to ultimately ensure its passage.

Biden addressed the federal voting rights legislation during an event marking the 100th anniversary of the Tulsa race massacre, in which a white mob looted and burned Tulsa’s Greenwood district, which was known as “Black Wall Street.”

As many as 300 Black Tulsans were killed, and thousands of survivors were forced for a time into internment camps overseen by the National Guard. Biden said the nation must acknowledge the long-forgotten chapter of history to fully heal from it, and he pledged action on key issues confronting Black Americans, including police misconduct and restrictions on voting rights.

“We can’t just choose what we want to know, and not what we should know,” Biden said. “I come here to help fill the silence, because in silence wounds deepen.”

Despite Biden’s pledge to keep fighting to pass legislation protecting voting rights, however, he acknowledged Tuesday that his biggest obstacle may lie within his own party.

Biden called out two fellow Democrats in explaining why he hasn’t enacted some of the most ambitious elements of his agenda, noting that slim majorities in the House and evenly divided Senate have hamstrung legislative negotiations around key issues like voting rights.

Responding to critics who question why he hasn’t been able to get a wide-reaching voting rights bill passed, Biden lamented, “Well, because Biden only has a majority of effectively four votes in the House, and a tie in the Senate — with two members of the Senate who voted more with my Republican friends.”

It appeared to be a veiled reference to Democratic Sens. Joe Manchin of West Virginia and Kyrsten Sinema of Arizona, both of whom have frustrated Democrats with their defense of the filibuster. The rule requires most legislation to win 60 votes to pass, making many of Democrats’ biggest priorities like voting rights and gun control dead on arrival in the 50-50 Senate. While Sinema is a sponsor of the voting rights bill that passed the House, known as the For the People Act, Manchin has refused to sign on, calling the measure “too broad.”

But it’s not just Manchin and Sinema who oppose doing away with the filibuster — as many as 10 Democratic senators are reluctant to change the rules even for must-pass legislation like the voting rights bill. Biden himself has not said he wants to end the filibuster.

It’s unclear whether Biden’s comments will change the views of any senators, who are facing tough choices ahead as pressure mounts on them.

Senate Majority Leader Chuck Schumer, D-N.Y., told colleagues that he would be bringing the voting rights bill to a vote the week of June 21, in effect testing where senators stand. Schumer warned in a letter to colleagues last week to brace for the month ahead.

“The June work period will be extremely challenging,” Schumer told them, adding that it would “test our resolve.”

Biden has tasked Vice President Kamala Harris with leading the administration’s efforts to defend voting rights, declaring that with her leadership, Americans will again “overcome” efforts to reduce access to voting, as they have in the past and did during the 2020 election, which saw record turnout despite new voting restrictions.

It adds another high-profile fight to Harris’ fast-expanding portfolio, which includes addressing the root causes of migration from Central America, leading the National Space Council and working on expanding access to broadband internet.

In a statement, Harris said she plans to work with voting rights groups, community organizations and the private sector to strengthen voting rights, as well as push for passage of voting rights legislation on Capitol Hill.

“The work ahead of us is to make voting accessible to all American voters, and to make sure every vote is counted through a free, fair, and transparent process. This is the work of democracy,” she said.