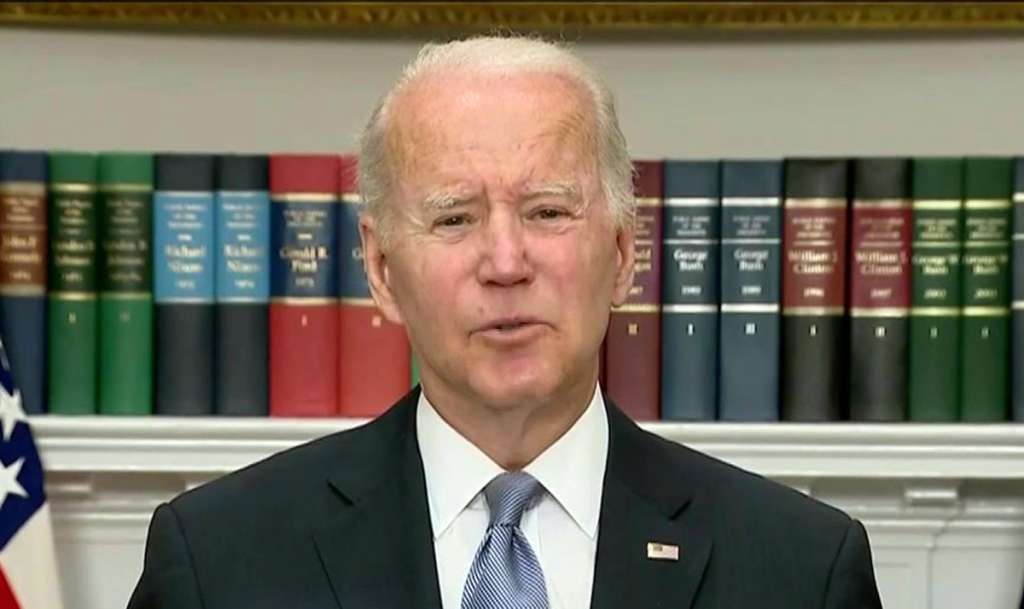 The signing comes as the U.S. Congress is poised to unleash billions more to fight the war against Russia — with Democrats preparing $40 billion in military and humanitarian aid, larger than the $33 billion package Biden has requested.

It all serves as a rejoinder to Russian President Vladimir Putin, who has seized on Victory in Europe Day — the anniversary of Germany’s unconditional surrender in 1945 and Russia’s biggest patriotic holiday — to rally his people behind the invasion.

“This aid has been critical to Ukraine’s success on the battlefield,” Biden said in a statement.

Biden said it was urgent that Congress approve the next Ukraine assistance package to avoid any interruption in military supplies being sent to help fight the war, with a crucial deadline coming in 10 days.

“We cannot allow our shipments of assistance to stop while we await further Congressional action,” he said. He urged Congress to act — and “to do so quickly.”

The resolve from Biden and Congress to maintain support for Ukraine has been lasting, but also surprising. Still, as the months-long war with Russia grinds on, the bipartisan showing for Ukraine will be tested as the U.S. and allies are drawn closer toward the conflict.

The House could vote as soon as this week on the bolstered Ukraine aid package, sending the legislation to the Senate, which is working to confirm Biden’s nominee Bridget Brink as the new Ukrainian ambassador.

With the president’s party holding only the slimmest majorities in the House and Senate, Republican cooperation is preferred, if not vital in some cases, for passage of the president’s strategy toward the region.

“I think we will be able to do it as quickly as possible,” House Speaker Nancy Pelosi said over the weekend about an emerging aid package. “We have great bipartisanship in terms of our support for the fight for democracy that the people of Ukraine are making.”

Despite their differences over Biden’s approach to foreign policy and perceived missteps in confronting Russia, when it comes to Ukraine the members of the House and Senate have held together to support the president’s strategy.

The lend-lease bill that Biden signed into law Monday revives the World War II era strategy to more quickly send military equipment to Ukraine. Launched under during World War II, it signaled the U.S. would become what Franklin D. Roosevelt called he “arsenal of democracy” helping Britain and the allies fight Nazi Germany.

Before signing the bill, Biden said “Putin’s war” was “once more bringing wanton destruction of Europe,” drawing reference to the significance of the day.

Flanked by two Democratic lawmakers and one Republican, Biden signed the bill, which had widespread bipartisan support. It sailed through the Senate last month with unanimous agreement, without even the need for a formal roll call vote. It passed overwhelmingly in the House, drawing opposition from just 10 Republicans.

“It really matters,” Biden said of the bipartisan support for Ukraine. “It matters.”

One of the bill’s chief Republican sponsors, Sen. John Cornyn of Texas, said in a statement the measure will give Ukraine “the upper hand against Russia, and I’m glad America could act as the arsenal of democracy for this critical partner.”

Other measures, including efforts to cut off Russian oil imports to the U.S. and calls to investigate Putin for war crimes, have also gained widespread support, though some lawmakers have pushed Biden to do even more.

“While President Putin and the Russian people celebrated Victory Day today, we’re seeing Russian forces commit war crimes and atrocities in Ukraine, as they engage in a brutal war that is causing so much suffering and needless destruction,” said White House press secretary Jen Psaki. She said Putin was “perverting” history to attempt to “justify his unprovoked and unjustified war.”

Biden acknowledged his request for more in military and humanitarian aid for Ukraine would have to be separated from money he also sought from Congress to address the COVID-19 crisis at home.

Decoupling the two funding requests would be a setback for the president’s push for more COVID-19 spending, but a nod to the political reality of the Congress.

Republicans in Congress are resisting spending more money at home as the pandemic crisis shifts to a new phase, and Biden did not want to delay money for Ukraine by trying to debate the issue further.

Biden said he was told by congressional leaders in both parties that keeping the two spending packages linked would slow down action.

“We cannot afford delay in this vital war effort,” Biden said in the statement. “Hence, I am prepared to accept that these two measures move separately, so that the Ukrainian aid bill can get to my desk right away.”

As the now bolstered Ukraine package makes its way through the House and Senate, with votes possible soon, lawmakers are showing no signs of flinching. Countless lawmakers have made weekend excursions to the region to see firsthand the devastation of the war on Ukraine and surrounding countries, as more than 5 million refugees flee the country.

Rather than fight the spending overseas — as had been an increasingly popular viewpoint during the Trump era — some lawmakers in both parties want to boost the amount of U.S. aid being sent to Ukraine.