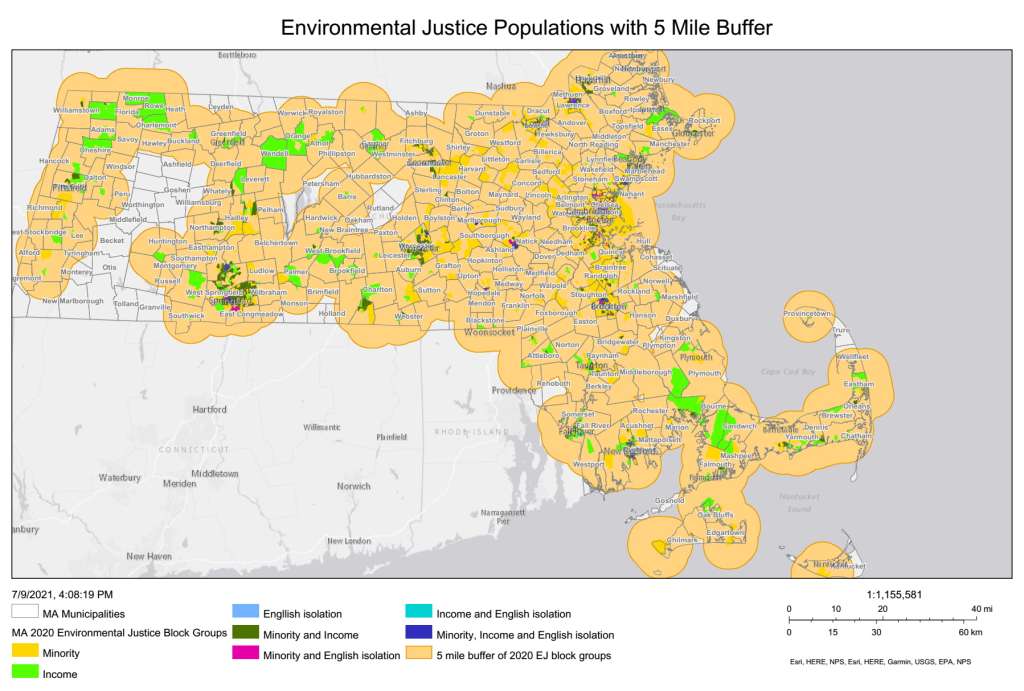 A map produced by the Department of Energy Resources shows the areas where incentivized biomass facilities would be prohibited under a proposal to shield environmental justice communities and surrounding areas from the wood-burning plants. [DOER]

Lawmakers from both sides of the aisle have let the Baker administration know that they are not happy with proposed regulations that would effectively protect environmental justice communities and surrounding areas from new wood-burning power generation facilities while singling out just 35 towns as possible plant hosts.

The latest version of that plan got a hearing before the Joint Committee on Telecommunications, Utilities and Energy on Friday, with Department of Energy Resources Commissioner Patrick Woodcock detailing the proposed changes for lawmakers.

The RPS governs the increasing amount of clean energy that utilities and municipal light plants must purchase each year. State law requires that DOER make biomass facilities eligible for the RPS program and rules that have been in place since 2012 make only efficient combined-heat-and-power biomass plants eligible to sell renewable energy credits into the RPS market.

But once each environmental justice community and its corresponding five-mile buffer was mapped out, about 90 percent of the state’s land area was excluded.

That leaves just 10 percent of the state — a stretch of communities west of the Connecticut River and along the Connecticut border, a strip of coastline that runs through Cohasset, Scituate and Marshfield, and small shreds of various other towns — where future biomass facilities could be located and be eligible for incentives under the Baker administration’s policy.

“It doesn’t matter where a facility is sited in Massachusetts or elsewhere, the science still says no,” Sen. Jo Comerford said, referring to the fact that biomass generation pollutes more than other sources like solar. “The logic here in these regulations is tortured. A biomass plant cited more than five miles away from the nearest environmental justice community is not any greener than a biomass plant in Springfield. The location of the facility has never been a factor in RPS class one eligibility. Class one should be reserved for the cleanest energy sources.”

In all, land in just 35 of the state’s 351 cities and towns would remain available for incentivized biomass facilities.

“These regulations not only demonstrate environmental neglect, but they are also patently unfair towards these ‘exception’ communities who are being both targeted for biomass siting and then are forced to endure the obstructive and harmful consequences of this energy production,” Republican Sen. Patrick O’Connor, who represents coastal areas just south of Boston, wrote in a letter to DOER signed by eight other lawmakers.

Sen. Adam Hinds, a Pittsfield Democrat, represents 17 of the 35 towns where a biomass facility could still qualify for state incentives and asked Woodcock whether his agency was singling those communities out or trying to tacitly signal that the administration is not interested in biomass facilities.

“It would seem that this regulation is systematically pushing plants into very specific areas. And, of course, right into my district, you could argue,” Hinds said Friday. “And so I guess the question is, has DOER decided to push biomass woody fuel facilities into 35 towns deliberately, or is it making a larger statement that we’re actually moving away from biomass as RPS eligible source of energy?”

Woodcock told Hinds that DOER wants to be “cautious with biomass energy” but defended the state’s two existing biomass facilities and suggested there could still be a place for them in the administration’s broader energy policy.

“We certainly do not think that it will be a significant contribution to Massachusetts’ overall portfolio,” the commissioner said. “I would note though, I’ve been working within the Baker administration since 2017. There are two facilities that are eligible for the standard — the Seaman Paper facility [in Gardner] and also the Cooley Dickinson facility [in Northampton] — and I haven’t heard any concern since 2017 with those facilities at all. Those are the types of facilities that are eligible and I would encourage the committee, as they’re thinking long-term about these policies, to visit those facilities.”

Woodcock said that the proposed regulations are expected to lead to a small increase in biomass production regionally — out-of-state facilities can qualify for the Massachusetts incentive program — but said the changes proposed “are extremely unlikely to make a new biomass plant financeable.”

Sen. Michael Barrett, who co-chairs the committee, told Woodcock that it sounded to him like DOER was taking a position that “is somewhat supportive of current biomass, but distinctly unenthusiastic and bearish about additional biomass.”

“Why don’t we formalize what seems to be the informal and unofficial thrust of these proposed new regulations? Why leave 35 out of 351 municipalities in the crosshairs?” Barrett asked, referring to a request O’Connor included in his letter that Woodcock support legislation that would make all new in-state biomass ineligible for state incentives.

Woodcock said he would “commit to working with this committee on thinking through what long-term biomass policies need to be implemented” as a study of the public health impacts of biomass facilities ordered by the state’s latest climate law gets underway but said it was “important to move forward” with the regulations to maintain consistency between DOER programs.

He also told lawmakers that the biomass regulations were written with a provision of the climate law signed earlier this year that mandates an environmental report be conducted on any project that could impact air quality proposed within five miles of an environmental justice community.

“We are certainly trying to reflect upon the Legislature’s work in the climate act and use that as a construct moving forward,” Woodcock said. ” As you know, I certainly would be willing to engage in discussions on specific language on proposed legislation.”