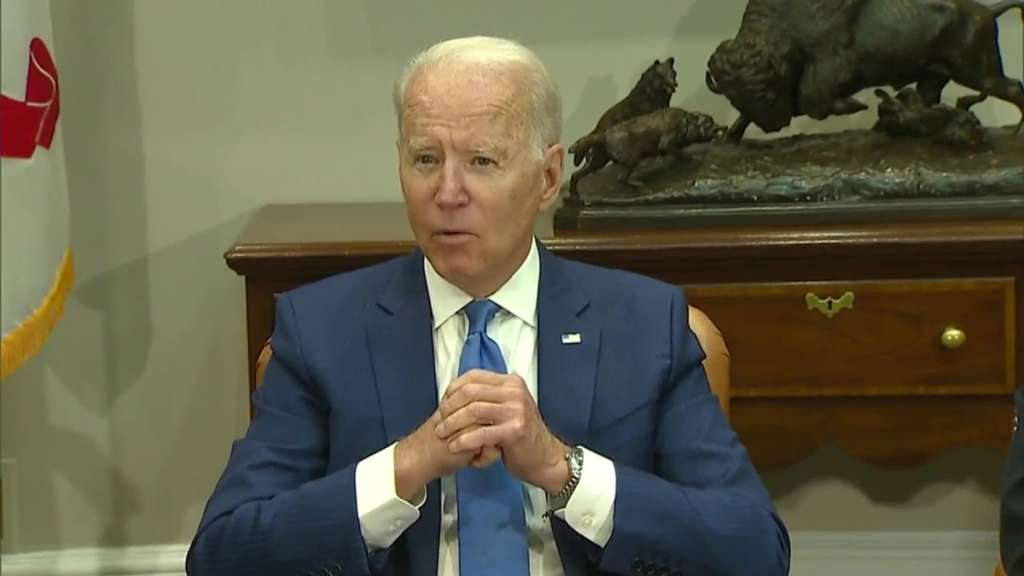 WASHINGTON (AP) — A $1 trillion bipartisan infrastructure deal senators struck with President Joe Biden is at risk of stalling out as Republicans mount stiff resistance over ways to pay for it and momentum shifts to a more robust Democratic proposal that could come into focus as soon as Tuesday.

Biden’s big infrastructure proposals are moving on parallel tracks in Congress in a race against time and political headwinds to make a once-in-a-generation investment in the nation. Senators from both groups are huddling privately again Tuesday to shore up their proposals. But opposition to the smaller bipartisan package is emerging from business leaders, outside activists and GOP senators, potentially denying it the support that’s needed for passage.

“I’m going to take this day by day and participate in the process and see where we end up,” said Sen. Jerry Moran, R-Kan., who was part of the bipartisan group of 21 senators but is not fully committed to the plan.

Paying for the new infrastructure was always going to be a challenge, which is partly why public works investments have lagged over time. Biden has proposed raising taxes on corporations and wealthy Americans earning more than $400,000 a year, which would cover not only the nearly $1 trillion proposal, but also the broader Democratic plan that is now swelling beyond $3.5 trillion. Republicans reject that approach.

Instead, the bipartisan group of senators is racing to salvage its plan, straining to come up with other revenue streams to fund the $1 trillion package, which includes about $579 billion in new spending beyond regular expenditures.

One proposal to go after taxpayers who skip out on income taxes initially had potential bipartisan appeal, but now is being lambasted by the outside groups as a way to enable the IRS to snoop around Americans’ personal finances. It would boost the IRS by $40 billion to bolster staff to audit tax returns, unleashing as much as a $100 billion net increase in revenues to federal coffers.

Sen. Mike Crapo, R-Idaho, said he doesn’t disagree that “taxpayers need to pay the taxes they honestly owe.” But he said he also believes “the IRS should not have unrestrained authority to impose unreasonable burdens on American citizens, and so that’s where I’m going to be looking.”

Another proposal calls for reinstating fees that chemical companies used to pay for cleaning up the nation’s worst hazardous waste sites, which could bring in about $13 billion over 10 years. Those fees were allowed to expire in 1995, and the cleanup efforts are funded by general revenues. Biden has called for restoring the fees “so that polluting industries help fairly cover the cost of cleanups.”

But the American Chemistry Council called on lawmakers to remove the fees, saying they would likely be paid by consumers in the form of higher costs.

“Pay-fors are still up in the air,” said Sen. Mike Rounds, R-S.D., who was also part of the larger group of 21 senators who signed on to the bipartisan effort but is now unsure about it.

The core negotiating group, made up of five Democratic and five Republican senators, says money could come from $125 billion in COVID-19 relief funds approved in 2020 but not yet spent, as well as untapped unemployment insurance funds, among a hodgepodge of other sources.

As the bipartisan group struggles to devise consensus over revenue streams, it’s becoming increasingly clear that their proposal might not be fully paid for at all — opening it to another attack from senators who may withhold their votes over deficit concerns.

“This ought to be credibly paid for,” said Senate Republican leader Mitch McConnell, signaling the party’s stance.

Ten Republican senators would be needed to back the bipartisan bill, joining with all 50 Democrats to reach the 60-vote threshold typically required to overcome a filibuster and advance it toward passage.

With Republicans cool to the bipartisan effort and Democrats eyeing it as insufficient, it’s unclear whether the accord that was struck with much fanfare last month at the White House will prove lasting. A vote is possible — but unlikely — as soon as next week.

Meanwhile, the broader Democratic framework being compiled by independent Sen. Bernie Sanders and senators on the Senate Budget Committee he chairs is swelling past $3.5 trillion and gaining momentum.

Emerging from a meeting Monday at the White House, Sanders said he and Biden were on the same page seeking a “transformational” investment — beyond roads and bridges to include child care, elder care and an expansion of health care under Medicare for older Americans, as well as a sizable sum addressing climate change.

A broad range of centrist and progressive senators seems to agree, exiting a meeting with White House advisers late Monday at the Capitol and saying they want to produce a bold plan that “meets the moment,” as Sen. Debbie Stabenow, D-Mich., put it.

Under budget rules, Democrats could pass the proposal on their own in the evenly split Senate, without the 60 votes typically required.

“The end of the day, we’re going to accomplish something very significant,” Sanders said.

Once rivals for the White House, Sanders and Biden are now joining forces to shape the president’s top priority.

“My job is to do everything I can to see that the Senate comes forward with the strongest possible legislation to protect the needs of the working families of this country,” Sanders said.

Ed Mortimer of the U.S. Chamber of Commerce said some of the group’s members have concerns about some pay-fors in the bipartisan framework, but added, “This is an investment we believe is worth making.”