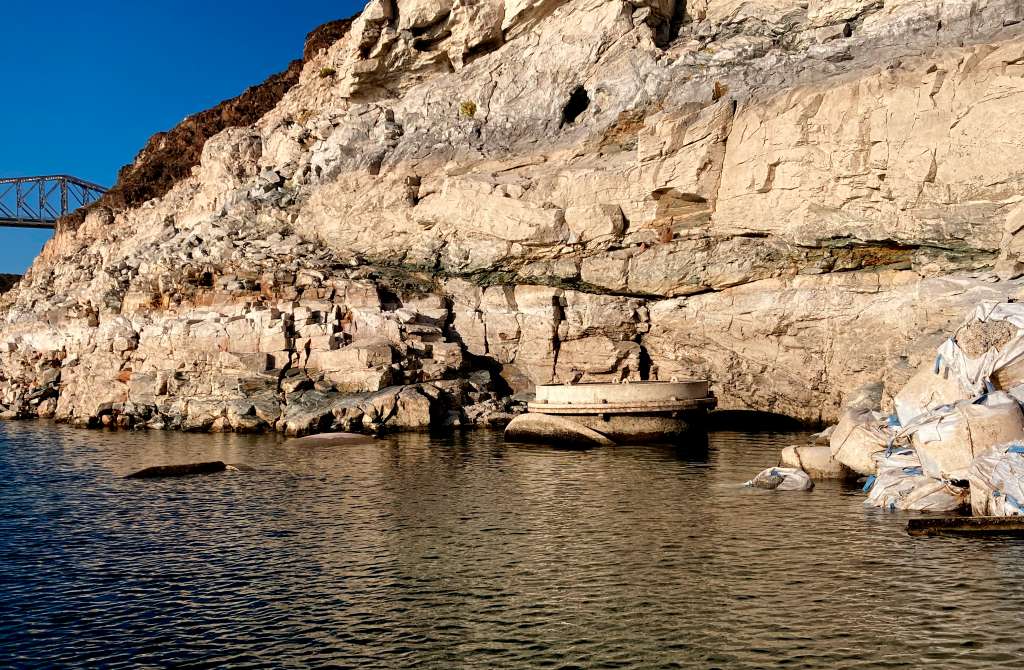 This photo taken Monday, April 25, 2022, by the Southern Nevada Water Authority shows the top of Lake Mead drinking water Intake No. 1 above the surface level of the Colorado River reservoir behind Hoover Dam. The intake is the uppermost of three in the deep, drought-stricken lake that provides Las Vegas with 90% of its drinking water supply. (Southern Nevada Water Authority via AP)

LAS VEGAS (AP) — A body inside a barrel was found over the weekend on the the newly exposed bottom of Nevada’s Lake Mead as drought depletes one of the largest U.S. reservoirs — and officials predicted the discovery could be just the first of more grim finds.

“I would say there is a very good chance as the water level drops that we are going to find additional human remains,” Las Vegas police Lt. Ray Spencer told KLAS-TV on Monday.

The lake’s level has dropped so much that the uppermost water intake at drought-stricken Lake Mead became visible last week. The reservoir on the Colorado River behind Hoover Dam has become so depleted that Las Vegas is now pumping water from deeper within Lake Mead, which also stretches into Arizona.

Personal items found inside the barrel indicated the person died more than 40 years ago in the 1980s, Spencer said.

He declined to discuss a cause of death and declined to describe the items found, saying the investigation is ongoing.

Police plan to reach out to experts at the University of Nevada, Las Vegas to analyze when the barrel started eroding. The Clark County coroner’s office will try to determine the person’s identity.

Lake Mead and Lake Powell upstream are the largest human-made reservoirs in the U.S., part of a system that provides water to more than 40 million people, tribes, agriculture and industry in Arizona, California, Colorado, Nevada, New Mexico, Utah, Wyoming and across the southern border in Mexico.