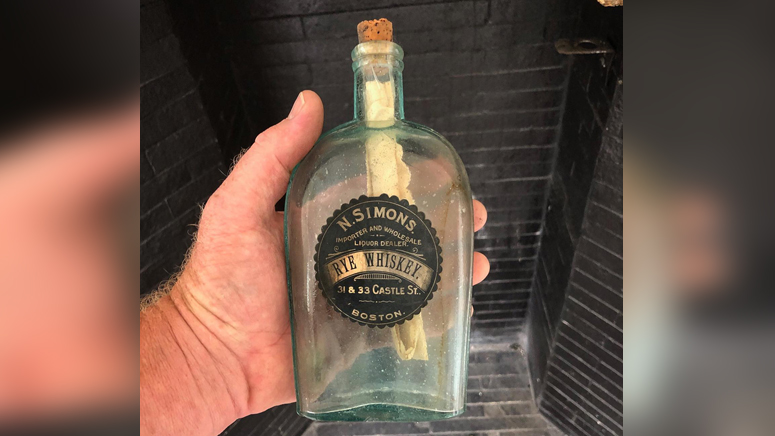 BOSTON (WHDH) - A bottle containing a mysterious 126-year-old note was recently found hidden away inside the wall of a building in Boston.

A person living in the Back Bay near Commonwealth Avenue found the bottle tucked into a space between their fireplace flue and an interior wall, according to the Boston Archaeology Program.

Photos shared on Facebook showed a rolled up piece of paper stuffed inside an old “N. Simons” rye whiskey bottle. The label read, “Importer and Wholesale Liquor Dealer” and had the address “31 & 33 Castle St., Boston” printed on it.

The note inside the bottle had the name “Tom Ford” scrawled on it, along with the phrase “6 on Shea.”

“We have a mystery for the hive mind this week! A Boston resident found this amazing message in a bottle tucked into the space between their fireplace flue and an interior wall, presumably placed there by past builders,” the social media post read. “Anybody have any ideas about N. Simons, Tom Ford, or “6 on Shea?” Let us know in the comments!”

One Facebook user suggested that the note was evidence of secretive “drinking and gambling.”

Another user commented, “There was a (very short-lived) professional football/soccer league in 1894- one of the captains was Dennis Shea.”

As of Wednesday, the origin and meaning behind the note was unclear.