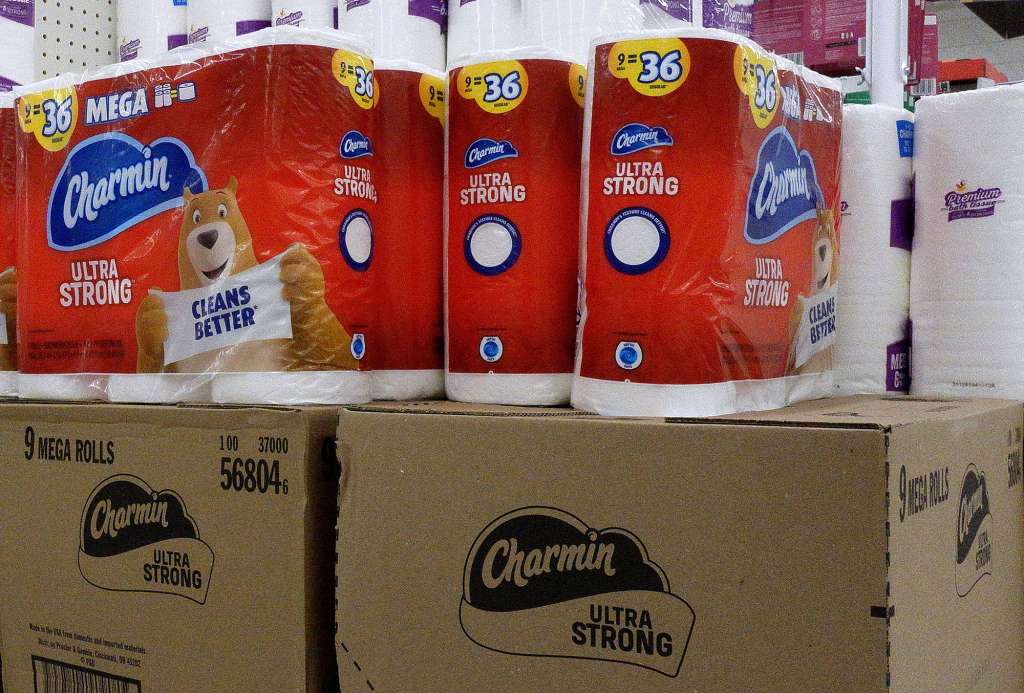 Charmin Ultra Strong toilet paper is on display on a supermarket shelf on October 15, 2021, in Arlington, Virginia. - More air in that bag of chips? Fewer flakes in your cereal box? You're not imagining it: "Shrinkflation," a tactic used by industry to hide price increases, is back in vogue. Facing the post-pandemic inflationary surge, partly fueled by bottlenecks in global supply and trouble finding workers, companies are under more pressure to deal with rising costs. Consumer advocate Edgar Dworsky, who has followed the phenomenon he calls downsizing for quarter of a century, says he has identified dozens of products in recent months that have seen sneaky price increases. He found goods ranging from Charmin toilet paper rolls to Cheerios cereal, to Royal Canin canned cat food, where the size or weight has shrunk, but the price remains the same. (Photo by Olivier DOULIERY / AFP) (Photo by OLIVIER DOULIERY/AFP via Getty Images)

SACRAMENTO, Calif. (AP) — An ambitious California proposal aims to reduce plastic production for single-use products like shampoo bottles and food wrappers by 25% starting next decade, part of an effort to rein in pollution from the ubiquitous material.

A bill introduced late Thursday aims to bring environmental and business groups together to avoid a similar ballot measure slated to go before voters in November. But at least two of the ballot measure’s three proponents aren’t yet on board.

Democratic Sen. Ben Allen, the bill’s author, said that if passed the proposal would make California a leader in reducing plastic waste by focusing on eliminating plastic at the source, not just recycling it once produced.

“The truth is we just need less crap out there — less plastic out there in general,” Allen said Friday.

Plastics have long been a target of environmental groups. Most plastic is not recycled and millions of tons are polluting the world’s oceans, hurting wildlife and showing up in drinking water. Various efforts are underway to rein in such pollution, with states attempting to reduce the use of plastic grocery bags, straws and other products. This month the federal government said it will phase out the sale of single-use plastics like water bottles at national parks.

Under the bill, the 25% reduction in plastic from single-use products would start in 2032. It would apply to producers of products like laundry detergent, toothpaste and food wrappings, as well as companies like Amazon that package products for mailing. They would have to replace the plastic with other materials, reduce their packaging or market the products as reusable and make it easy for consumers to do so. It wouldn’t apply to water or other beverage bottles, which are regulated by different recycling laws.

Beyond plastic, producers of all single-use products, even those made of paper or glass, would need to ensure that 65% are recycled by 2032. It’s estimated that less than 10% of plastic in the United States is recycled now.

Makers of single-use products would have to join “producer responsibility organizations” that would implement the rules with state oversight. The organizations would have to collect $500 million annually for a state plastic pollution mitigation fund. Producers that don’t follow the rules could be fined $50,000 a day.

The legislation was the product of long negotiations between Allen’s office, environmental and business groups. Allen said he doesn’t expect the plastics industry to support the bill. But he hopes they won’t lobby against it because it may be more acceptable than the ballot measure and would mean they don’t have to spend money trying to defeat it.

“While California businesses both large and small face a maze of environmental regulations as a result of this bill, we believe that this proposal ensures long term policy certainty around recycling and packaging,” Jennifer Barrera, president of the California Chamber of Commerce, said in a statement.

Still, there was no immediate commitment from backers of the ballot measure to withdraw it. Ballot measures can be removed until June 30, meaning the bill would need to win quick passage.

“We will pull the initiative if/when the bill that the Governor signs merits the sacrifice. Not a day sooner. We are nowhere close to that,” Linda Escalante of the Natural Resources Defense Council and a proponent of the measure said in a statement.

Caryl Hart, vice chair of the California Coastal Commission, and Michael Sangiacomo, former president of the waste management company Recology, are the other two backers of the ballot measure. Sangiacomo said in a statement the legislation doesn’t do enough for him to support pulling the ballot measure. He didn’t elaborate further.

The ballot measure requires a 25% cut in plastic production, but starting two years earlier. It would ban the use of Styrofoam and similar products by food vendors. The legislation wouldn’t do that; instead it would require 20% of such products to be recycled. Anja Brandon, U.S. Plastics Policy Analyst at the Ocean Conservancy, said that amounts to a “de facto ban” because the material can’t be recycled.

The ballot measure puts more regulatory power in the hands of the California Department of Resources Recycling and Recovery and puts a 1-cent fee on all single-use plastic products. The measure’s proponents say the legislation gives the industry too much power to regulate itself.

The Ocean Conservancy is one of the environmental groups backing the bill. Brandon called it the strongest plastics legislation in the country. Her organization estimated the bill would reduce plastic in the state by 23 million tons over 10 years.

“Walk down a grocery aisle, anything you see (that’s plastic) is going to be affected by this,” she said.