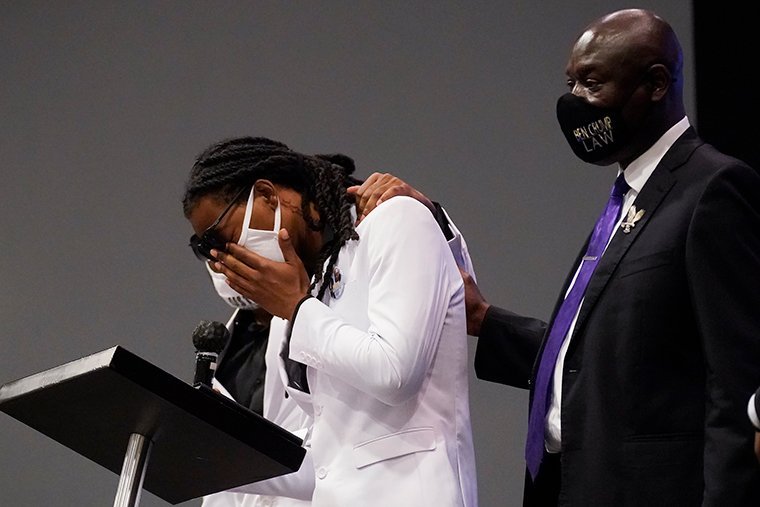 ELIZABETH CITY, N.C. (AP) — The Rev. Al Sharpton issued a powerful call for transparency and the release of body camera footage at the funeral Monday for Andrew Brown Jr., a Black man shot and killed by deputies in North Carolina, with the civil rights leader likening withholding the video to a “con” job done on the public.

“I know a con game when I see it. Release the whole tape and let the folks see what happened to Andrew Brown,” Sharpton told mourners in a scorching eulogy at the invitation-only service at a church in Elizabeth City.

“You don’t need time to get a tape out. Put it out! Let the world see what there is to see. If you’ve got nothing to hide, then what are you hiding?” he said, to loud applause.

A judge ruled last week that the video would not be released for another month pending a state investigation into the April 21 shooting of Brown, 42, by deputies attempting to serve drug-related search and arrest warrants.

An independent autopsy commissioned by his family said Brown was shot five times, including once in the back of the head. The shooting sparked days of protests in the city in rural northeastern North Carolina.

A long line of mourners filed into the church, many wearing white T-shirts with Brown’s image and the words, “Say his name.” In the lobby, a wreath of red and white flowers with a ribbon bearing the message, “Rest in Peace Drew,” referring to Brown’s nickname, stood next to a tapestry with images of him. As the service started, an ensemble sang songs of praise including, “You’re the Lifter,” while some mourners stood and clapped.

Family members have said that Brown was a proud father of seven, who was known for entertaining relatives with his stories and jokes.

The FBI has launched a civil rights probe of the shooting, while state agents are conducting a separate investigation. Three deputies who were involved remain on leave. The state’s Democratic governor, Roy Cooper, has called for swift release of the footage, which must be approved by a judge under state law.

The search and arrest warrants accused Brown of possessing small amounts of cocaine and methamphetamine that he intended to sell. Brown had a criminal history dating back to the 1990s, including past drug convictions.

A prosecutor has said that Brown’s car ran into the deputies before they opened fire, while a family attorney who watched a 20-second clip of body camera footage disagreed, saying that Brown posed no threat. The sheriff has said his deputies weren’t injured.

During his eulogy, Sharpton slammed the notion that Brown’s past record or actions on the day of the shooting justified violence against him.

“Whatever record Andrew had, Andrew didn’t hurt nobody,” he said, adding: “How do you try and justify shooting a man that was not a threat to you, because he was running away from you?”

Among the mourners at the service was 40-year-old Davy Armstrong, who said he went to high school with Brown and lived near him while the two were growing up. He said Brown seemed to be doing well when he ran into him recently before the shooting.

“He was very humble, very generous. He said he was doing good,” said Armstrong, who works in construction. “We hear about this on TV all the time. But when it’s someone so well known and so respected, it’s pretty painful.”

After the funeral, 67-year-old Michael Harrell, who lives around the corner from Brown’s house, recalled that he would see Brown playing with his kids in the yard.

“Everything is in God’s hands,” Harrell said of the message he took away from the funeral. “And through God’s hands, truth and justice will be served. People will be held accountable.”