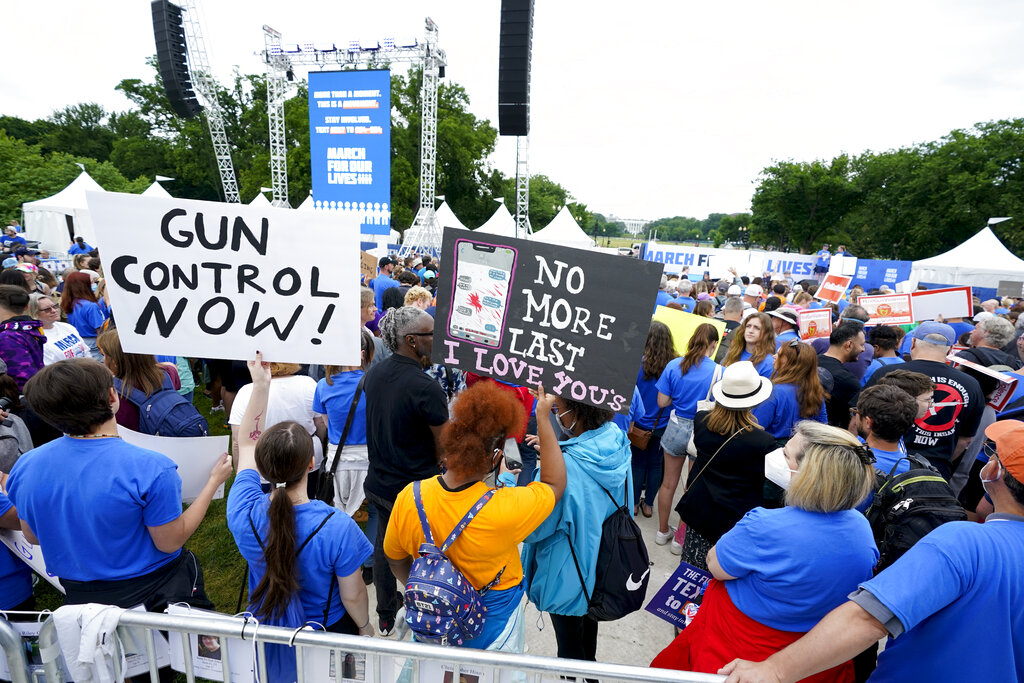 People arrive to attend the second March for Our Lives rally in support of gun control in front of the Washington Monument, Saturday, June 11, 2022, in Washington. The rally is a successor to the 2018 march organized by student protestors after the mass shooting at a high school in Parkland, Fla. (AP Photo/Manuel Balce Ceneta)

(CNN) — Leading police organizations and leaders are increasingly calling for action on gun policy in the wake of several recent mass shootings, which is notable advocacy from a wider community that has often been split on how to respond to gun violence.

The calls for action range from more incremental steps, such as expanding so-called red flag laws to authorize authorities to take guns away from people who are deemed dangerous, to bans on assault-style rifles altogether.

“We are out outgunned. We’re outmanned. We’re out-staffed. We do need responsible gun legislation,” Phoenix Police Chief Jeri Williams, who is president of the Major Cities Chiefs Association, a group that represents police chiefs in large cities around the country, told the Senate Judiciary Committee on Wednesday. “We do believe that there should be a ban on assault weapons and high-capacity magazines in order for us to properly serve and protect our community.”

Late last month, two key groups — the International Association of Chiefs of Police and Fraternal Order of Police — issued a joint letter pushing for legislative action. The groups reiterated their support on Sunday for gun control legislation when they praised an agreement between senators on a framework for a gun bill.

Jim Pasco, the executive director of the Fraternal Order of Police, said he spoke with Sen. Chris Murphy, a Connecticut Democrat and one of the lead negotiators on a Senate gun bill, Democratic New Jersey Sen. Cory Booker, officials at the White House, the Department of Justice and interest groups on both sides of the gun reform debate.

An FOP endorsement is meaningful for both parties at a time when crime has become a central election issue for voters, and the group supported Donald Trump in 2020. Pasco told CNN withholding an endorsement is not out of the question.

During a press call, Pasco pushed for compromise.

Pasco told CNN that FOP is committed to the “art of the doable” and was reluctant to define legislative text preemptively.

Retired Chief Terry Cunningham, deputy executive director of the IACP, told CNN while he is a “fervent” supporter of the Second Amendment, he believes that right is limited.

He pointed to strong licensing laws and extreme risk protective orders as effective measures, while admitting a final bill may not encompass all that IACP wishes.

“We’re also realists,” he said. “Although we may want to go further, it’s clear that Congress probably isn’t going to.”

While approaches may differ, a recent press call arranged by 21 CP Solutions, a public safety consulting firm, made clear that five groups — ranging from a police lobbying group to professional organizations for chiefs, women and black law enforcement leaders — believe the time for gun-related legislation is now.

“I have seen the devastating consequences of unchecked gun violence can have on the communities we serve — gun violence that could have been curbed by meaningful action by Congress,” East Baton Rouge County Sheriff’s Office Captain Frederick Thomas said on the call. “I cannot ignore the fact that federal inaction has led us to this horrific infection.”

The head of the International Association of Chiefs of Police, Police Chief Dwight Henninger of Vail, Colorado, framed the gun epidemic in America as an international embarrassment.

“I’m asked by police leaders around the world, ‘What’s going on in the United States, and why can’t you fix the problem?'” Henninger said.

“As a victim of gun violence, when I was shot at, and my partner was killed on duty, I have an understanding of what the victims are feeling, and the continued ‘thoughts and prayers’ comments are not enough,” he said.

The unity of the five groups also highlights a chasm in the wider law enforcement community over how to balance Second Amendment rights with a gun crime. Law enforcement groups submitted opposing briefs in the most consequential Second Amendment case taken up by the Supreme Court in decades: New York State Rifle and Pistol Association V. Bruen. The court is set to rule in coming weeks on the case, which challenges the legality of New York’s requirement to show a valid reason when applying for a concealed carry permit.

In July 2021, several police organizations joined several other firearms associations to support gun rights advocates, arguing the outbreak of “murders and shootings” since the 2020 death of George Floyd heightened the need for “self-defense where it is most frequently needed: outside the home.”

About two months later, a group of former large city police chiefs, such as former New York City Police Commissioner Bill Bratton and former Philadelphia Police Commissioner and CNN contributor Charles Ramsey, urged the court to keep New York’s 108-year-old law in place, arguing that “may-issue” gun permitting laws that give states discretion on how they approve gun permits were “a critical component of their obligation to safeguard … their citizens.”