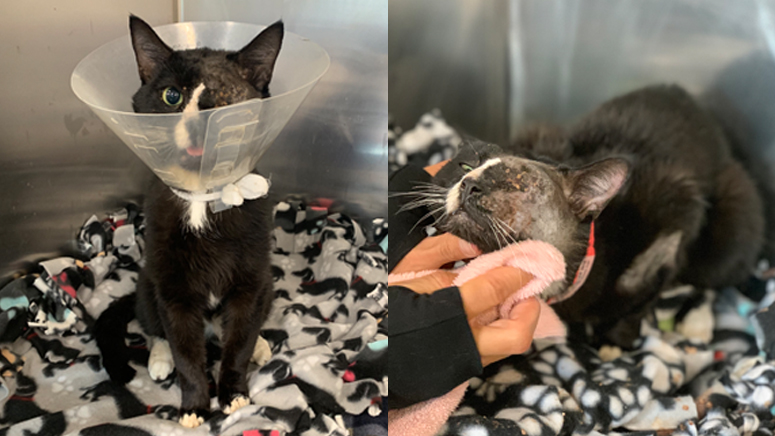 BOSTON (WHDH) - A 5-year-old cat seen wandering the streets of Dorchester with his left eye dangling from the socket is looking for a forever home.

A good Samaritan who found the badly injured black-and-white cat, later named Marv, on Oct. 4 brought him to the Massachusetts Society for the Prevention of Cruelty to Animals’ Angell Animal Medical Center for treatment.

Veterinarians examined Marv and determined that because of the head trauma and the injured eye, he was most likely struck by a fast-moving car, according to the MSPCA.

Marv was given IV fluids and ordered to rest for several days before he was stable enough for the operation to remove his eye.

“We’re confident that even though he’ll live the rest of his life with only one eye, he’ll adjust just fine,” she added. “The most important thing to us is that he’s now safe and will soon be in a loving home.”

Marv’s head trauma appears to have resolved on its own as he is no longer exhibiting signs of dizziness or unsteadiness, according to adoption center manager Anna Rafferty-Arnold.

“He’s recovered quite well and his personality has started to emerge now that he’s feeling better,” she said. “He’s been quite friendly with everyone and we’re going to start assessing shortly how he gets along with other cats and dogs, as that will give us a better feel for the kind of home in which he’ll do best.”

Anyone interested in adopting Marv can email adoption@mspca.org for more information.