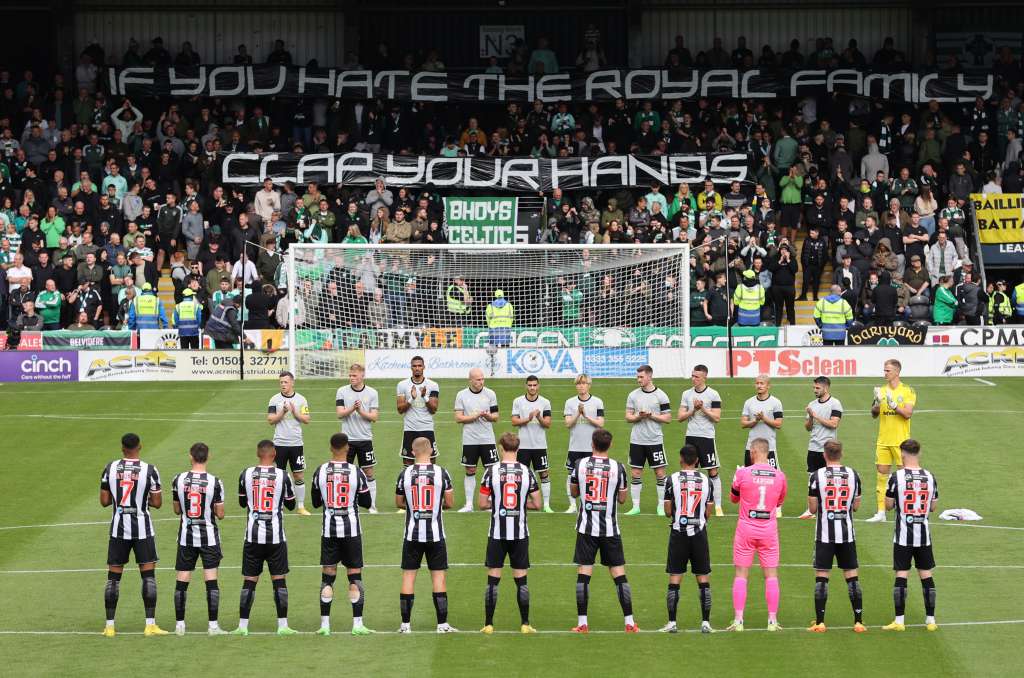 (CNN) — Supporters of Glasgow-based football team Celtic FC chanted anti-royal sentiments during a planned minute’s applause for Queen Elizabeth II ahead of the team’s match against St. Mirren in Paisley, Scotland, on Sunday.

The minute’s applause had been organized after the home team, St. Mirren, chose to pay tribute to the late monarch, but Celtic fans unfurled a banner reading “If you hate the royal family clap your hands” and chanted the same words throughout the planned homage.

The Scottish FA said in a statement on Monday that “as a mark of respect and in keeping with the period of National Mourning, home clubs may wish to hold a period of silence and/or play the National Anthem just ahead of kick-off, and players may wish to wear black armbands.”

Sky, who was broadcasting the match, confirmed to CNN that it turned down the stadium microphones to limit the audibility of the chants during its broadcast of the minute’s applause.

After the applause ended, commentator Ian Crocker said, “Apologies if you were offended by anything you might have heard. Most people showed respect, some did not.”

It is the second time this week that groups of Celtic fans have expressed anti-royal feelings, with the club currently subject to an investigation by European football’s governing body UEFA after displaying a banner reading “F**k the crown” during Wednesday’s Champions League match against Shakhtar Donetsk.

CNN has reached out to the Scottish Professional Football League and Celtic FC for comment but did not immediately get a response.

Though Celtic is based in Scotland, its traditions are intertwined with those of anti-monarchist Irish republicans since it was founded with the aim of alleviating poverty in Glasgow’s Irish Catholic immigrant population in the 1880s.

Its crosstown rival Rangers, meanwhile, is traditionally more aligned with Protestantism and royalist unionism, heightening the antagonism between the two sides.

The Scottish FA, the governing body for football in the country, said to CNN that it didn’t have “any jurisdiction over fan behaviour at league matches.”

Booing during the minute’s silence was also audible in other matches held in the Scottish Premiership this weekend.

Dundee United released a statement, acknowledging that “a small section of the crowd chose to not respect the minute’s silence” ahead of its match against Rangers at Ibrox on Saturday.