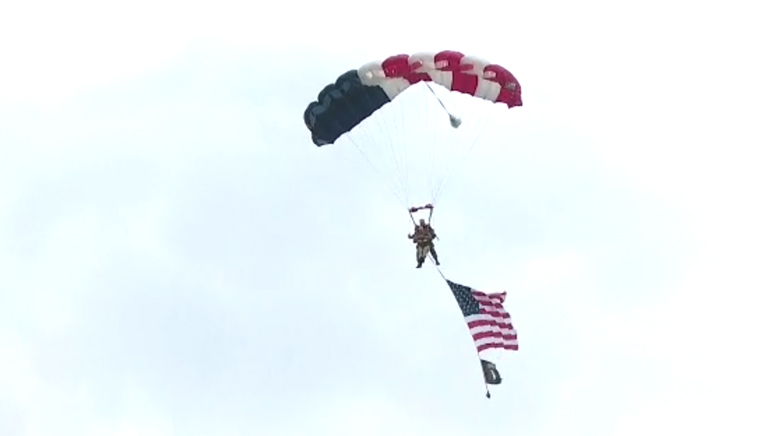 CHESHIRE, Conn. (AP) — A town man will join about 600 others in France next month to re-enact the paratrooper landing during the D-Day invasion of World War II while another Cheshire resident is helping coordinate the vintage planes that will make the drop.

June 6 marks the 75th anniversary of the Normandy invasion.

Matt Jalowiec, Cheshire-Southington probate judge, has been making parachute drops out of C-47 planes as part of the World War II Airborne Demonstration Team for several years. He’ll fly to France on June 1 and join hundreds of other Americans and Europeans for the drop near Sainte Marie du Mont, the first French town liberated by the 101st Airborne Division in 1944.

Jerry O’Neill, a pilot who’s managed air shows, is coordinating the maintenance, fueling, training and preparation for 11 C-47 or similar DC-3 planes and crews that will fly to France Sunday.

The drop will take place on June 7, a day after the actual anniversary to accommodate President Donald Trump’s visit to France as well as local celebrations. Jalowiec and O’Neill said the effort is a major investment of time and money on the part of volunteers and vintage airplane owners, but important to honoring and remembering the sacrifice of World War II soldiers.

Veterans, including C-47 pilots from Connecticut, will also travel to France for the demonstration.

“It’s a big number,” O’Neill said of the 75th anniversary. “The veterans who can attend and be honored, they’re fewer and fewer.”

Jalowiec said there’s a “moral obligation” to preserve the stories of veterans and to pass them on to the next generation. Re-enacting and reliving portions of history helps accomplish that.

The restored planes will fly with some modern avionics but for the most part, they are the same as they would have been in 1944. O’Neill said pilots have trained with immersion suits this week should there be an accident over the Atlantic.

Pilots will fly from Greenland to Iceland and then to Scotland.

Among the planes heading for France is the C-47 named “That’s All Brother,” which was saved from a scrap yard and fully restored at a cost of $6 million recently. It was the lead plane on D-Day and will again lead the formation next month.

Jalowiec jumped from the plane earlier this year in preparation for France. He compared it to a brand new car.

“When you close the door, it’s solid,” he said. With other restored planes “you hear everything rattle and move. You’re usually pretty excited to get out of the plane.”

As a concession to safety, June’s drop will be made at 1,200 to 1,500 feet. That gives parachutists enough time to deploy a reserve parachute if the main one doesn’t work.

On D-Day, paratroopers jumped at 900 or even 600 feet and didn’t bother to bring reserve chutes since there would have been no time to deploy them in an emergency.

The higher altitude adds about four seconds after the main chute is supposed to deploy, Jalowiec said.

“That’s why it’s important to have those extra four seconds,” he said.

“That’s why I park the planes” rather than jump, O’Neill said, laughing.

Training for the jump with multiple planes dropping dozens of men in Oklahoma was like a movie, Jalowiec said. He’s looking forward to France and is careful to avoid any injury that would disqualify him.

“I get nervous walking down the stairs. You sprain your ankle and you’re done,” Jalowiec said.

O’Neill said sponsors have helped defray some of the cost of fuel, oil and maintenance for pilots. Much of the cost of readying the C-47s for a trans-Atlantic flight is borne by the owners, though.