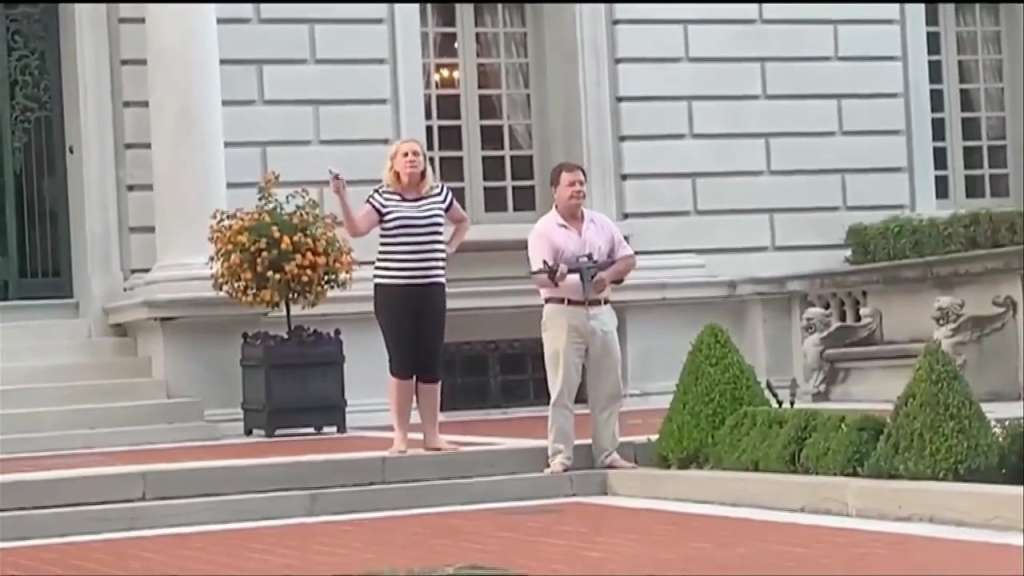 O’FALLON, Mo. (AP) — Nine protesters have been issued trespassing summonses for marching onto a private St. Louis street in June, a demonstration that prompted a couple to emerge from their home with guns to confront the demonstrators.

Mark and Patricia McCloskey were both charged in July with unlawful use of a weapon in a polarizing case that landed them a spot at the Republican National Convention last month. Police spokeswoman Evita Caldwell on Friday confirmed that nine protesters have been issued summonses but said the St. Louis City Counselor’s office is still deciding whether to issue charges on the citations.

The Rev. Darryl Gray, who led the protest, called the citations an attempt to intimidate peaceful protesters.

“We’re not going to be threatened, and that’s what’s happening across this country,” said Gray, who was not issued a summons. “You’ve got local governments and states who are trying to charge protesters, financially charge them, wanting them to pay costs. You’ve got others who want to make it a law against exercising our First Amendment right.”

On June 28, about 300 people protesting racial injustice veered onto the private street. The McCloskeys said demonstrators ignored a “No Trespassing” sign and broke through a gate, but protest leaders said the gate was open.

Mark McCloskey, 63, came out of the couple’s Renaissance palazzo-style mansion with an AR-15 semi-automatic rifle, a probable cause statement said. Patricia McCloskey, 61, emerged with a semi-automatic handgun. No shots were fired. Missouri law allows homeowners to use force, even lethal force, to defend their homes.

But Circuit Attorney Kim Gardner, a Democrat, said the guns created the risk of bloodshed. A police probable cause statement said protesters feared “being injured due to Patricia McCloskey’s finger being on the trigger, coupled with her excited demeanor.”

The charges against the McCloskeys drew an angry response from President Donald Trump. The couple spoke on video at the RNC, saying they had a “God-given right” to defend themselves and warning that unless Trump is reelected, America faces a future of lawlessness and mayhem.

Meanwhile, Republican Missouri Gov. Mike Parson has said he will almost certainly pardon the McCloskeys if they are convicted. Their case is still pending in court.

While the McCloskeys face felony charges, trespassing is a lower-level crime that is handled by the city counselor’s office, not Gardner’s office.

Deputy City Counselor Mike Garvin told the St. Louis Post-Dispatch that his office wants to examine video from the protest “to see where the accused trespassers were at the time.”

Activist Ohun Ashe wrote on Twitter on Sept. 4 that she had received a summons for trespassing outside the McCloskeys’ home.

“I had a gun waved in my face by them but trespassing is what matters?” she wrote.

It wasn’t clear why just nine of the estimated 300 protesters were issued summonses. Police declined comment beyond a brief statement acknowledging the summonses. A phone message left with the city counselor’s office was not immediately returned.