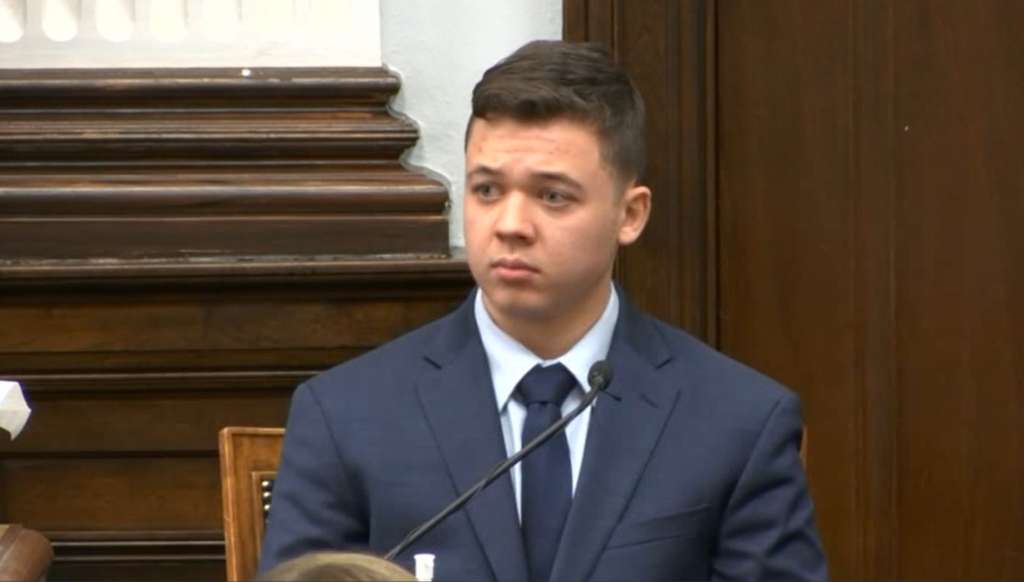 KENOSHA, Wis. (AP) — Closing arguments at Kyle Rittenhouse’s murder trial began Monday with a prosecutor questioning whether Rittenhouse was really there to help the night he showed up in Kenosha with a rifle during a protest against racial injustice.

Prosecutor Thomas Binger told the jury that Rittenhouse had no connection to the business he said he was going to protect, he ran around with an AR-style semi-automatic rifle, and he lied about being an emergency medical technician.

“Does that suggest to you that he genuinely is there to help?” Binger asked.

Binger repeatedly showed a segment of drone video that he said shows Rittenhouse pointing the gun at protesters after setting down a fire extinguisher.

“This is the provocation. This is what starts this incident,” the prosecutor said.

Rittenhouse, how 18, killed two men and wounded a third during a tumultuous night of protests in the summer of 2020 in a case that has stirred bitter debate in the U.S. over guns, vigilantism, racial injustice and law and order.

Prosecutors have sought to portray Rittenhouse as the aggressor who created a dangerous situation in the first place that night with his semi-automatic rifle, while Rittenhouse has said he feared for his life and acted in self-defense.

Each side was given 2 1/2 hours to make its case to the jury before deliberations were to begin.

The young man from Antioch, Illinois, faces a mandatory life in prison if convicted of the most serious charge against him, first-degree intentional homicide.

Rittenhouse was 17 when he traveled the few miles from his home to Kenosha on Aug. 25, 2020, as the city was in the throes of violent protests that erupted after a white police officer shot and wounded Jacob Blake, a Black man. Rittenhouse said he went there to protect property.

Supporters have hailed him as a hero who took a stand against lawlessness; foes have branded him a vigilante.

Earlier Monday, Judge Bruce Schroeder dismissed a count of possession of a dangerous weapon by a person under 18, a misdemeanor that had appeared to be among the likeliest of the charges to net a conviction for prosecutors.

The judge then launched into 36 pages of legal instructions to the jury, explaining the charges and the laws of self-defense.

The underage weapon charge was punishable by up to nine months in jail.

But the defense argued that Wisconsin law has an exception related to the length of a weapon’s barrel. Prosecutors argued that the defense was misreading the statute. The judge had twice sided with prosecutors earlier in declining to dismiss the charge, but he also said the law was confusingly written.

After prosecutors conceded Monday that Rittenhouse’s rifle was not short-barreled, the judge threw out the charge.

Public interest in closing arguments was evident in the morning, when more people than usual stood in a line outside Courtroom 209 to get a seat.

Rittenhouse is white, as are the three men he shot. The case has polarized Americans, raising questions about racial justice, vigilantism, the Second Amendment right to bear arms, and white privilege.

But some of the prosecution’s own witnesses — and a wealth of video — largely supported his claims of self-defense.

Perhaps in recognition of that, prosecutors asked the judge to let the jury consider several lesser charges if they acquit him on the original counts. Schroeder agreed to do so Monday.

In his instructions, the judge said that to decide that Rittenhouse acted lawfully in self-defense, the jury must find that he believed there was an unlawful threat to him and that the amount of force he used was reasonable and necessary.

Schroeder told the jurors that if they find that Rittenhouse acted lawfully in self-defense on the top offense, they should not consider the lesser charges. “You’re done, and you can return a not guilty verdict without considering the lesser offenses,” he said.

Among the trial’s most compelling moments was Rittenhouse’s own testimony. In some six hours on the stand — most of it poised and matter-of-fact — he said he was afraid Rosenbaum would take away his gun and kill him and others. He said he never wanted to kill anyone.

“I didn’t do anything wrong. I defended myself,” Rittenhouse said.

After closing arguments, names were to be drawn to determine which 12 of the 18 jurors who heard testimony would deliberate, with the rest dismissed as alternates.

With a verdict near, Gov. Tony Evers said that 500 National Guard members would be prepared for duty in Kenosha if local law enforcement requested them.