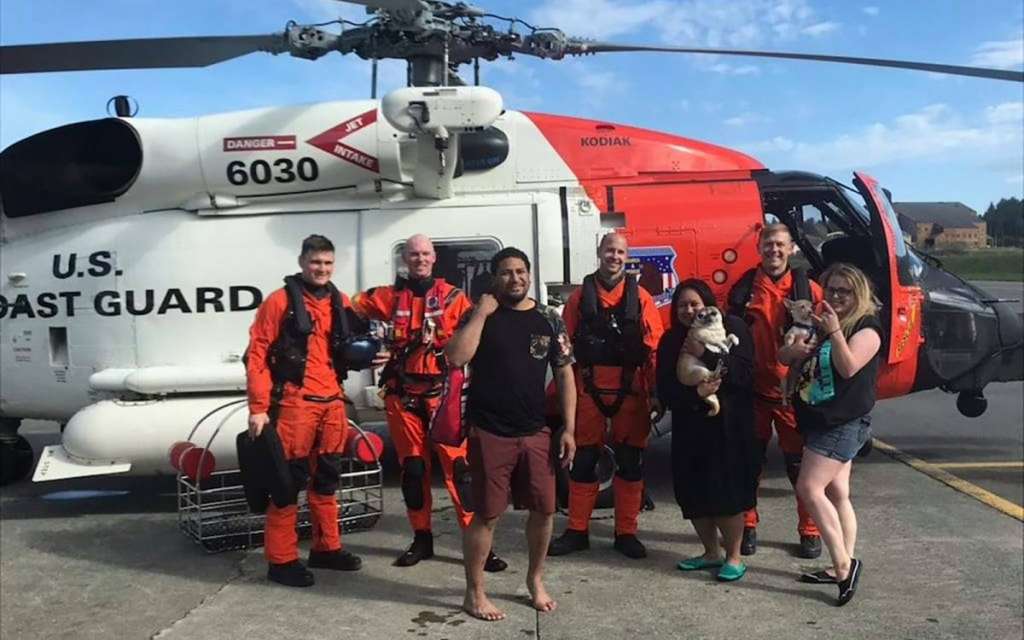 The Coast Guard rescued the group in Alaska on June 8 after their inflatable float was pulled out to the bay. Credit: US Coast Guard Alaska

(CNN) — Three friends, two dogs and one giant inflatable pink flamingo float were swept out into an Alaska bay on Saturday, leaving the group needing to be rescued by the US Coast Guard.

It’s a birthday celebration that Hollie Spence said she will never forget — and she is thankful to be alive today.

Spence, along with her roommate, Lepa Sega, and Lepa’s brother, Nation Sega, climbed onto a 10-foot inflatable pink flamingo float with their two dogs in a shallow area of White Sands beach in Kodiak.

Spence, who was celebrating her 30th birthday, said it was a nice, sunny day and the sky was clear, but it was windy. The group had previously floated on the giant flamingo raft last year and didn’t have any issues, she said.

“If we get too far out, we notice right away and pull it back,” she said.

The group packed some extra clothes, blankets, snacks and non-alcoholic drinks to enjoy an afternoon of relaxing on the float that was like an inflatable couch, Spence said. But they didn’t pack life jackets or paddles, she added.

The wind and currents proved to be too much for the rafters and quickly it pulled their float out of the shallow water and into Monashka Bay.

“It was a little windy but I never thought in a million years we would be drug out so fast and so far,” she said.

Within an hour, the group came to a stop on top of some offshore rocks on the other side of the bay. Alaska State Troopers and US Coast Guard were called in to rescue them but conditions were deemed too treacherous for the boats, so a helicopter hoist was used to lift the stranded group to safety, according to a Facebook post by the Coast Guard.

“It was a complete freak accident and we had to be rescued,” Spence said.

Spence said they were all checked by paramedics waiting for them at the Coast Guard station and no one had injuries. She added that they had some scrapes from the rocks but no injuries that required going to the hospital.

“It was the scariest day of my life,” she said. “I don’t think I’ll ever do something like this again.”