BOSTON (WHDH) - Boston police are investigating after a local man said the motorized scooter he depends on to get around was stolen.

“A cold-blooded thief,” Roosevelt McMillan called the person who walked off with his scooter. “To take something from a man who can’t walk, who can’t get around, who’s disabled.”

McMillan struggles to walk after undergoing two back surgeries for a slipped disc.

“My back and legs hurt all the time. I’m in pain right now,” he said. “That’s like taking my legs.”

Someone took off with the vehicle after McMillan went inside a South Boston store located on Dorchester Street.

“I went to Bell’s Market to get something to eat and when I came back outside, I started feeling sick.,” he said.

So he was taken to the hospital in an ambulance but the scooter was left outside.

McMillan said he still had the keys for the scooter in his possession and officers were unable to move it without them so they put a cover over it and left it outside the market.

“When I went to the hospital I just knew it would be there when I got back because I had the keys,” he said.

But, that was not the case and authorities were called back to check the store’s security cameras.

“The detective who looked at the cameras and looked at the videos said they seen a slim white guy jump out of, look like an Explorer, and pick the scooter up by himself. The thing weighs like three to 400 pounds – picked it up by himself,” McMillan explained.

The scooter was brand new and similar to this model: 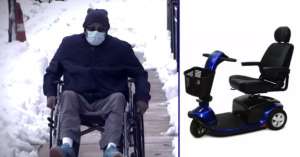 He only had it for about a month before it was taken.

Now he says he hopes the thief will be moved to do the right thing.

“That was a cowardly move and I wish that you could reach down in your heart and find a good place and give me my scooter back,” he said.

Anyone with information regarding this theft is asked to contact Boston police.