Connolly urges Dems to back up Biden on evictions 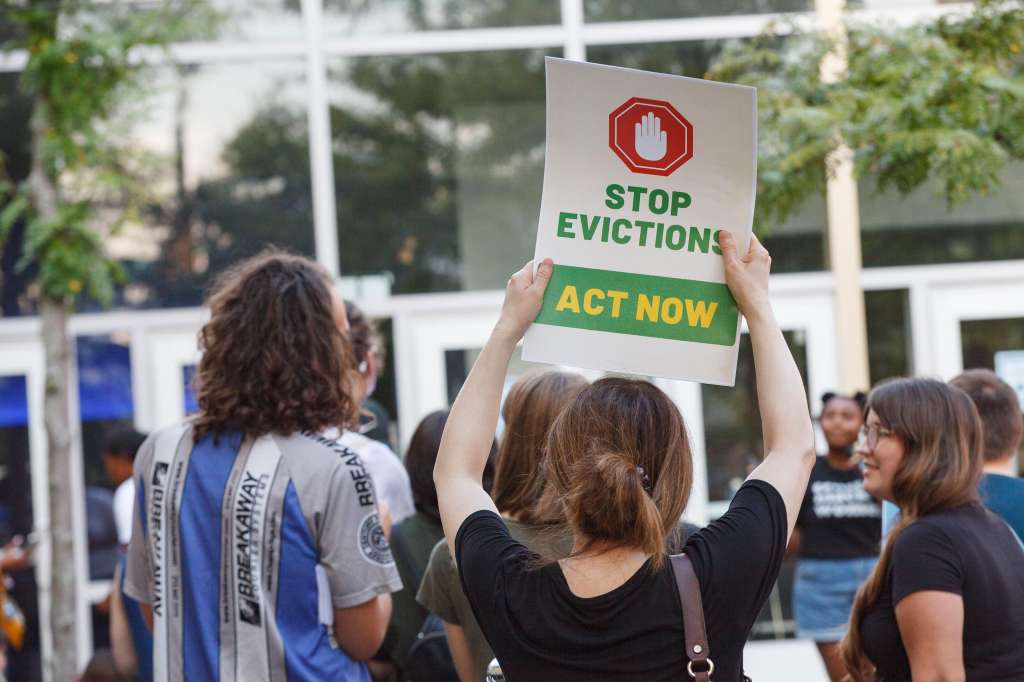 A woman holds a placard to stop evictions at a rally for housing reform. Credit: Stephen Zenner/SOPA Images/LightRocket/Getty Images

Fearing a wave of evictions following the expiration over the weekend of a federal moratorium, some Democrats on Tuesday said the Legislature should consider a new state ban on evictions as the Delta variant fuels a resurgence of COVID-19.

Rep. Mike Connolly, a Cambridge Democrat and leading proponent of the state’s initial eviction moratorium, said he feels “frustration” as he’s watched leaders at the federal level “pointing the finger at one another,” but doing nothing to stop the expiration of the moratorium.

And housing advocates said the expiration of the moratorium makes it more important than ever to protect tenants by passing bills like the “HOMES Act,” which would prevent an eviction from becoming a permanent black mark on an individual’s housing record.

President Joe Biden on Monday called on states without bans, including Massachusetts, to consider putting them in place at least through September, while the Centers for Disease Control and Prevention said it can’t act without Congress due to a Supreme Court ruling in June.

“And if it’s possible pick up the charge of President Joe Biden and go ahead and include in a bill an extended version of an eviction moratorium pursuant to the current public health emergency that we’re facing,” he continued.

While legislation to reinstate an eviction moratorium is currently pending before the Joint Committee on Housing, members of the Judiciary Committee on Tuesday heard testimony on a raft of bills related to property, land and tenancy rights.

The state eviction moratorium expired in October, at which point Gov. Charlie Baker launched a multi-faceted eviction diversion program that invested state and federal dollars into rental assistance, legal aid and other supports.

The governor said Friday that about $280 million in rental assistance has been deployed, helping the state avoid the worst of a spike in evictions predicted for last fall. Advocates, however, say that as many as 90 percent of applications for rental assistance from January through May were denied, with many renters not qualifying based on their income or failing to complete the applications.

Connolly said he’s heard from constituents who were denied because they did not submit enough documentation to prove eligibility, even though they checked the box to indicate they were enrolled in MassHealth, which is supposed to be an automatic qualifier.

Connolly said the availability of money for rental assistance should not be used as an argument against a revived moratorium.

“I would flip that and say why wouldn’t we have that backstop of protection and then to the extent that landlords need to be made whole they are better able to push through a bureaucratic process and obtain the money that is available,” Connolly said.

Sen. Jamie Eldridge, the Senate chair of the Judiciary Committee, said he agreed with Connolly that a moratorium should be considered.

“I think it’s something all of us as legislators, including committee members here, need to consider what action to take because evictions continue and I’m very concerned about this impact on families across the
states,” Eldridge said.

The House and Senate have just begun a summer recess that is expected to stretch until after Labor Day and major bills, like one reinstating an eviction moratorium, are not expected to surface during August.

Since the expiration of moratorium last fall, 13,628 new eviction cases have been filed, according to data compiled by the Massachusetts Trial Court, and new cases in January, February and March were below the levels seen in 2020 before the pandemic.

While the administration attributes the success in holding down eviction cases to the availability of resources, some advocates believe it’s only a matter of time before the problem worsens.

“All hell, unfortunately, is about to break loose both in term of foreclosures and evictions and too much of it is being done lawlessly without proper oversight,” said Grace Ross, coordinator of the Massachusetts Alliance Against Predatory Lending.

Ross and other housing advocates shared stories and examples of how landlords, banks and other can improperly try to force people from their homes, testifying in support of numerous bills that would bring more judicial oversight to the foreclosure process, improve the recording of property titles and prevent unnecessary vacancies in foreclosed properties.

Boston City Councilor Lydia Edwards testified in support of the “HOMES Act” (H 1808/S 921) that she said would prevent renters from being branded with “scarlet letter E” once an eviction case is brought against them.

“The fact is, if you file a case, the moment you create an eviction record that is permanent for life,” Edwards said. The East Boston councilor said people of color, particularly Black women, are more than twice as likely to be evicted and “not given a softer landing” in the courts.

The HOMES Act, filed by House Assistant Majority Leader Michael Moran and and Sen. Joe Boncore, would allow for eviction court records to be sealed so that prospective landlords could not use old cases to deny applicants housing.

Boncore’s bill would automatically seal eviction case records while the proceeding is ongoing, and in cases where the renter is found to be at fault the records would be sealed automatically after three years.

The House version of the bill allows residents to petition the court to seal their eviction records.

She described one woman interviewed by the institute who had a public record based on a no-fault eviction notice filed with the courts, and was denied more than 100 times as she sought new housing.

One landlord, however, said an apartment applicant’s rental history is important for both the property owner and the other residents of a building. He said existing tenants could be asked to pay higher rents to make up for someone who defaults.

“We ask you not to put a blindfold on property owners as they enter into rental agreements and we urge you to consider the chilling effect this could have on people deciding to rent their properties,” said Amir Shahsavari, vice president of the Small Property Owners Association.

California, Colorado, Nevada, Minnesota and the District of Columbia all have automatic sealing laws, according to Duke, and bills are pending in other states, including Connecticut.