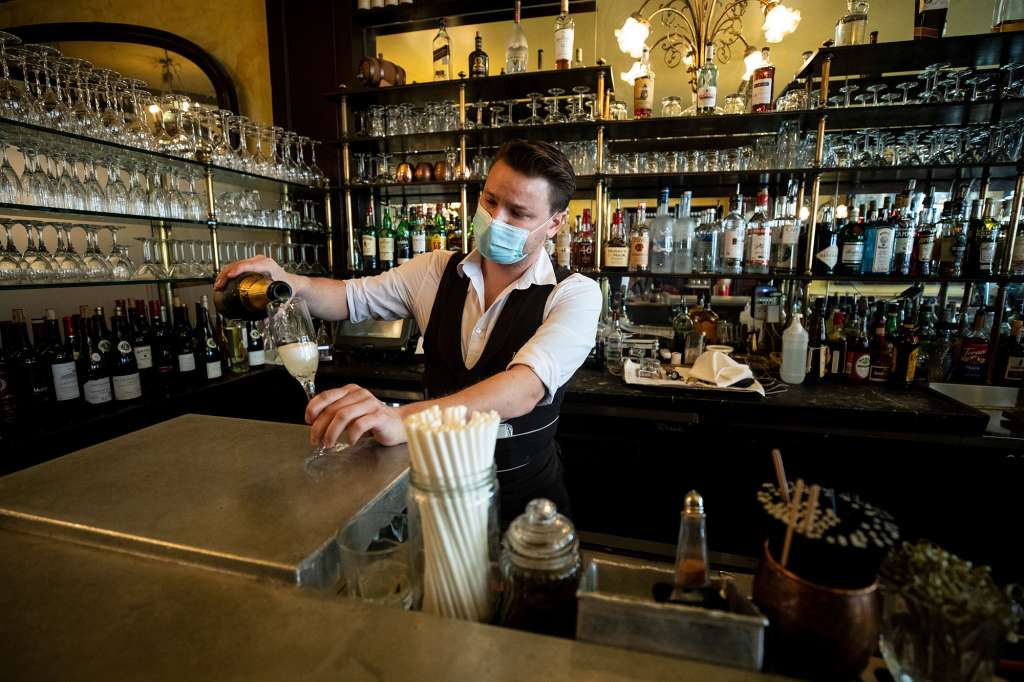 Mandatory Credit: Photo by ETIENNE LAURENT/EPA-EFE/Shutterstock (11805824b) Boris, a waiter, pours a glass of champagne while wearing a face mask at the 'Figaro Bistrot' in Los Angeles, California, USA, 18 March 2021. Restaurants owners hope they will keep having the authorization and leniency to continue sidewalks and outdoor spaces as restaurants, gyms, museums and cinemas are allowed to reopen their indoor space at a limited capacity in Los Angeles county as the area enters the less restrictive red tier. Indoor dining at 25% capacity authorized in Los Angeles County, USA - 18 Mar 2021
CNN

(CNN) — Spring has arrived, and America’s services sector — an enormous part of the economy — is positively booming.

As some pandemic restrictions are relaxed and vaccines are put in more arms, pent-up consumer demand is getting released — and that’s helping economic activity in the services sector roar back, according to the Institute for Supply Management‘s monthly report.

The report surveys business across the sector, from industries like entertainment and recreation, to real estate, construction and retail. Altogether, it accounts for a huge part of the US economy: 88% to America’s gross domestic product, the broadest measure of economic activity, according to the ISM.

For March, the group’s index jumped to the highest level ever recorded: 63.7, easily beating economists’ expectations.

The survey series began in 2008 (although the underlying data goes back to 1997), and the previous peak was in October 2018. Any index reading above 50 means the sector is expanding.

And that’s been the trend: March marked the tenth straight month of growth in services as the industry continues to recover from the pandemic shock.

“There is clearly a big surge in activity underway,” said Paul Ashworth, chief US economist at Capital Economics. “The drop in [Covid-19] case numbers and successful vaccination program allows restrictions to be lifted, at the same time as Biden’s $1.9 trillion in additional fiscal stimulus is super-charging incomes.”

New orders, inventories and employment were all up in March, and prices in the sector also increased at a faster pace.

The comments in the report, which is based on surveys of purchasing managers, point to shortages moving prices higher, Ashworth said.

But it may not all be great news: “The comments also highlight increasing problems with labor shortages, which suggests rising inflation may not be as transitory as many [Federal Reserve] officials appear to believe,” Ashworth said in a note to clients.

The Fed has said repeatedly that consumer price increases are expected over the summer as pent-up demand shakes loose but that these price jumps will be temporary and don’t pose a threat to the central bank’s ultra-low interest rates at this point.

The US stock market got a boost from the positive services data, and all three major stock indexes traded higher in the late morning.

Stocks started the day in the green as well, reacting to last week’s better-than-expected March jobs report, which coincided with Good Friday, a market holiday. The US economy added 916,000 jobs last month, more than economists predicted.