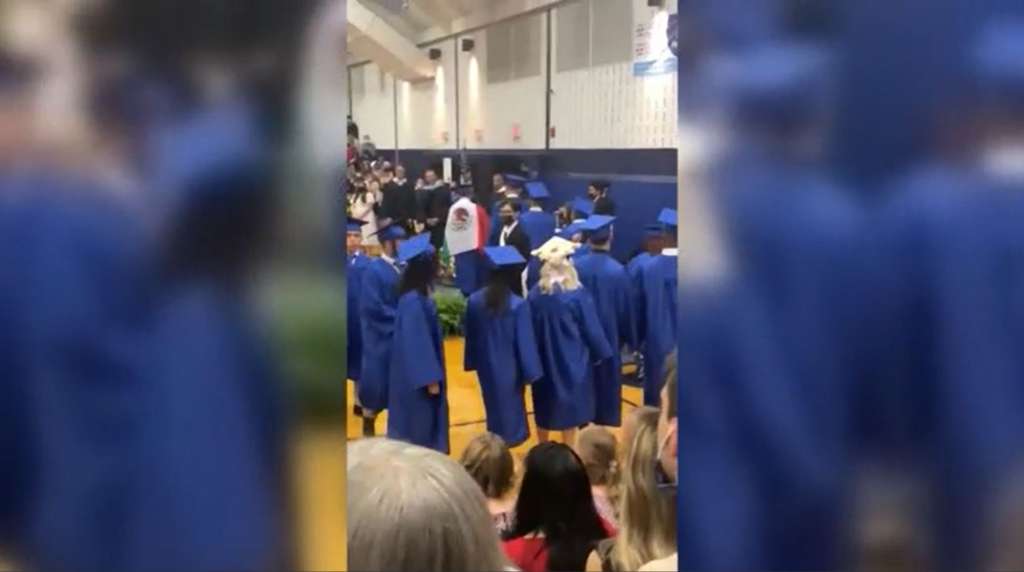 (CNN) — Devarius Peters wanted to celebrate graduation day wearing a pair of Black leather Alexander McQueen shoes. Ashley Saucedo and Ever Lopez, both graduates of different schools in different states, wanted to carry the Mexican flag to honor their roots.

But for all three students, their plans were thwarted by school officials who denied them their diplomas and blocked the high school graduatesfrom crossing the stage. Each school said the graduates were violating a school policy and refused to make an exception even as their families watched from the audience. In Peters’ case, a teacher, John Butler, traded shoes with him so he could walk.

The incidents have garnered national attention with some educators, experts and community advocates saying these are just the latest examples of young people of color being punished for how they celebrate graduation. Similar incidents have gone viral in the past, including in 2018 when a group of Black students at the University of Florida were rushed off stage for doing a short celebratory dance at their commencement ceremony. The college later apologized for how the students were treated. Now some critics, including a grassroots group in North Carolina where Lopez lives, are urging schools to reevaluate their policies, saying students should be allowed to show pride in their culture and identity at graduation ceremonies.

Many Latino students are the first in their families to graduate and have endured being criminalized, fought to stay out of the school-to-prison pipeline and had to work jobs to support their families while trying to finish school, said Kelly Morales, executive director of Siembra N.C., a grassroots organization that advocates for the Latino community. Latinos have maintained the highest high school dropout rate of any race dating to 1996 when it was 34%, according to the Pew Research Center. In 2016, it had fallen to 10%.

“We know that in order for Ever (Lopez) and any other student of color to have gotten to this point, that means that they had to face and beat every obstacle on the way,” Morales said. “And I think it’s something that historically and systematically, White students have not had to experience in the same way.”

Morales said Siembra N.C. has been advocating for Asheboro City Schools to change its rules in light of what happened to Lopez. She said she is hopeful that school officials, parents and students can have conversations that lead to policies that are more supportive of students of color.

The district, however, defended its policy and said in a statement that students were “encouraged to express their identity by decorating their mortar boards. A number of students followed the protocol and had the Mexican flag and other representations appropriately displayed during the ceremony.”

Lopez, a first generation high school graduate was allowed to pick up his diploma earlier this week at Asheboro High School. He said despite being denied his diploma at the ceremony, he has no regrets.

“I did what I had to do — represent, wear my flag and show my colors,” Lopez said, according to CNN affiliate WRAL.

His cousin, Adolfo Hurtado, told CNN that “the Mexican flag wasn’t worn as a political statement, rather a symbolic gesture in appreciation to those who worked hard to give him a life he would be proud of.”

One expert said disciplining students of color for how they celebrate graduation is a form of racial trauma. Dorinda Carter Andrews, chairperson and professor at the Michigan State University Department of Teacher Education, said young people may feel humiliated by the experience and it could impact their cross cultural relationships.

Andrews and a team of researchers at MSU found that Black students face higher rates of discipline, including suspensions and expulsions, at school than White students.

Andrews said schools failing to understand the behaviors of students of color is a “function of White supremacy.”

“It’s an example of policing Black joy or policing the joy of students of color,” Andrews said. “There is this message that there is a certain way to celebrate, there’s a certain way to dress and if you don’t align with that then you’re penalized. That way is always steeped in White cultural norms.”

Peters said he was embarrassed that he had to wear Butler’s shoes — which were two sizes too big — when he crossed the stage.

He said the students were required to wear dark-colored dress shoes and not allowed to wear slippers, athletic shoes, or open-toe shoes. He thought his shoes matched the requirements.

Butler said he didn’t think it was fair that the school would punish Peters over his shoes.

“You don’t stop a kid from receiving his high school diploma, already the most important moment of their life to that point, you don’t take that away for something as small as shoes — and that’s exactly what was going to happen,” Butler said.

The incident with Peters inspired one Virginia teacher to share a TikTok video with different clips of Black graduates being stopped by school officials when they danced while crossing the stage at graduation.

Kristina Button, a home school teacher, said this is “policing Black people’s accomplishments, and we have to stop doing it.”

Button said graduation is significant for many Black and brown families because they have faced oppression and poverty for so many generations.

Schools, she said, need to do away with rules that suppress how people of color celebrate their identity, their culture and beating the odds.

“It kind of squashes their self-esteem and the confidence that one, builds up,” Button said. “And I think there’s a level of trauma to that. If you understand the history of this country, you know, that it has everything to do with race.”

Oliver Telusma, who was among the University of Florida graduates kicked off stage in 2018, said he was shocked that he and his peers were treated that way. Telusma, a member of Alpha Phi Alpha Fraternity, Inc., said it’s common for Black fraternity members to do a short stroll, or dance, to honor their culture as they cross the stage.

He said it’s “disappointing” to hear that high schools are punishing Black and Latino graduates at their commencements.

“It reflects the same type of excessive policing (from law enforcement) that Black people experience,” said Telusma, who graduated from law school this year.

Graduate escorted off stage in Texas

Ashley Saucedo, the Texas student who waved the Mexican flag at graduation, was denied her diploma and escorted out of the arena for her actions. A teacher had also confiscated the Sarape-style stole she tried to wear, Saucedo said.

The school district, Southwest ISD, said in a statement that its graduation protocols prohibit “large disruptions such as props, flags, somersaults, cartwheels, or other actions.” The district said it allows students to display their individuality by decorating their graduation caps.

Saucedo told CNN affiliate KSATthat she waved the flag because she wanted to make her parents proud.

“I also did it for every parent out there who’s an immigrant and comes here to the United States to have a better life, not only for themselves but for their kids and the future grand kids and everybody else, so they can live the dream, the American dream,” Saucedo said.