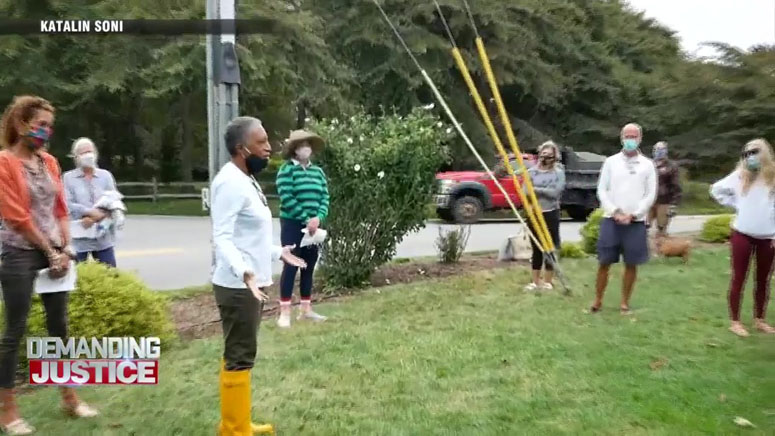 People on Martha’s Vineyard are demanding justice. A group has been gathering for daily vigils, taking a knee in remembrance of people killed by police.

Since June, Dana Nunes has led this vigil at the Beetlebug Corner, a somewhat remote spot in the town of Chilmark on Martha’s Vineyard.

“A lot of people have said for them it’s like church there are people who never miss a day,” she said.

Nunes said she got the idea to organize these gatherings when she noticed someone had ripped down a large Black Lives Matter sign.

“It made me angry that someone just couldn’t let it be, she said. “It was a very simple statement.”

Nunes says she showed up the next day at the very same spot and stood with her own sign. Eventually, she caught the attention of comedian Amy Schumer.

“I turned around there was this young blonde woman wearing running shorts and her hair pulled back in a ponytail,” she said.

Schumer began showing up to stand alongside Nunes and soon other celebrities followed.

“Nobody’s gonna come out to there corner and get motivated by this old black lady but she’s got the juice to do it. And she’s done so much,” Nunes said.

Recently, Angela Henry spoke to the attendees and asked everyone to remember her son DJ, the Pace University student who was killed by police in New York in 2010. The Henry’s won a civil settlement but want the criminal case reopened so the officer involved can be prosecuted.

“He opened fire on our son’s car and shot him three times, pulled him out of the car, handcuffed him, made him stand up on his own, and then laid him on the ground,” Henry said.

Every day, those who come share their thoughts and feelings and kneel for eight minutes and 46 seconds to remember the victims.

So many people come up to me and say I’m going to be going back to wherever tomorrow but I want to take this model with me and try and do it where I live,” Nunes said.

Nunes said her movement is having an impact on Martha’s Vineyard. She said the group has helped to raise enough money to begin diversity training for police on the island.