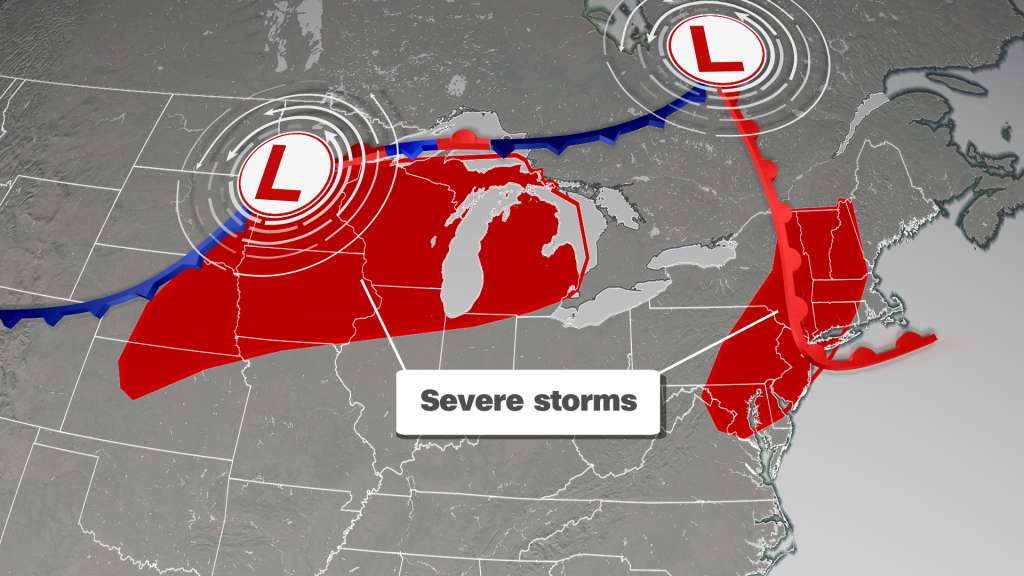 Severe weather -- including possible tornadoes, large hail and damaging winds -- will threaten more than 80 million people across the Midwest and Northeast on July 14, according to forecasts. Credit: CNN Weather

(CNN) — Severe weather — including possible tornadoes, large hail and damaging winds — will threaten more than 80 million people across the Midwest and Northeast on Wednesday, according to forecasts.

“Although large hail will be possible with [the thunderstorms], wind damage should be the more predominant severe threat,” according to the Storm Prediction Center in reference to the Midwest.

The center forecast similar weather in the Northeast, with strong winds being the biggest concern.

A storm system is tracking from the northwestern US and into the Midwest, triggering the development of these storms.

A Level 3 (out of 5) risk is in place for portions of Minnesota, Iowa, Illinois and Wisconsin, according to the Storm Prediction Center. This includes Madison, Wisconsin; Cedar Rapids, Iowa and Rochester, Minnesota. There also is a risk — albeit lower — in cities like Chicago, Minneapolis, Milwaukee, Des Moines and Omaha.

The day will begin with rain and thunderstorms over the northern Plains and into western portions of the Midwest. There will be some heavier pockets of rain and perhaps an isolated storm, but as this moisture tracks into the Midwest, the severe weather risk will ramp up.

By the afternoon, some of the thunderstorms are expected to turn severe as they track into parts of Minnesota and Iowa.

“The complex [of thunderstorms] will have the potential for widespread damaging winds, but a few stronger updrafts could produce larger hail as well,” according to the National Weather Service Twin Cities office.

Storms will continue to track east through the afternoon, likely reaching Lake Michigan by the evening.

But some locations could be in for more than one round of strong-to severe-thunderstorms.

The National Weather Service in Des Moines warns this can make the forecast uncertain: “To further add to the challenge, what happens in round one will have critical implications for round two.”

The intensity of the second round will be determined by when the morning round of storms depart Minnesota and Iowa.

A line of thunderstorms is expected to form over portions of the Midwest this evening and will track south and east well into the overnight hours. These storms could contain damaging winds, tornadoes and large hail.

Flash flooding will be possible, with some locations expected to receive over three inches of rain.

The severe threat will shift into the central Plains and lower Midwest for Thursday, with the coverage of strong storms expected to be isolated.

A separate storm system located over southeastern Canada will be responsible for isolated severe storms in the Northeast.

The Storm Prediction Center has an elevated, Level 2 risk for central portions of New York and New England, which includes Albany and Springfield.

There is also a Level 1 risk in place across much of the Northeast region, including New York, Washington, Philadelphia and Boston.

The hot and humid weather can help fuel strong thunderstorms. High temperatures will be near or above 90 degrees as far north as the New York City area this afternoon.

A few showers and thunderstorms will be present in the morning near the eastern Great Lakes and US-Canada border. These storms are not expected to be severe.

As they track east into the afternoon, these storms will become a bit more widespread and some will turn severe as they approach the I-95 corridor.

Isolated flash flooding could be possible, with heavy downpours associated with these storms, but they will be quick-moving compared to the flash flooding in parts of the region on Monday.