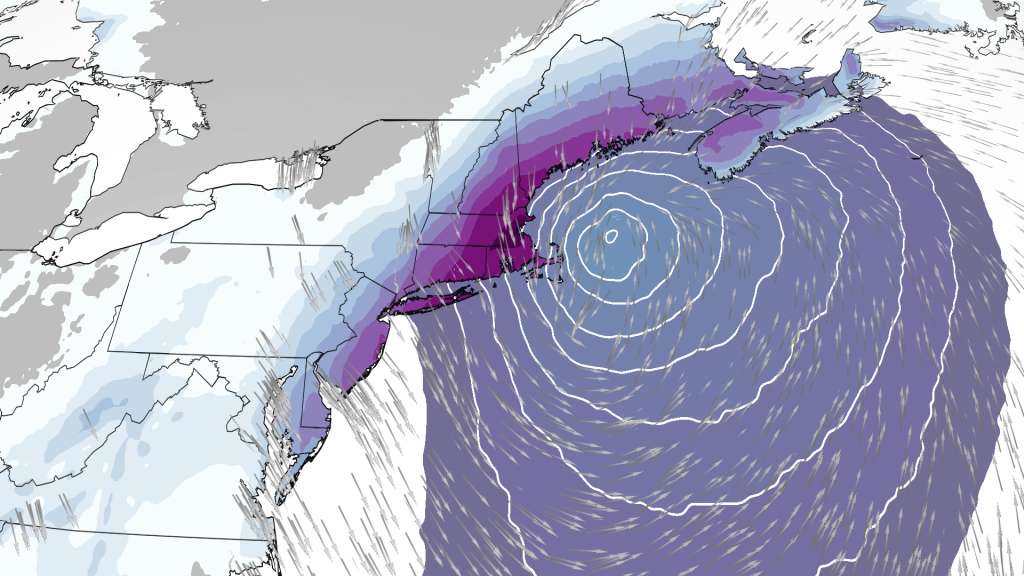 The path of a weekend nor'easter is becoming clearer as 75 million people from the Southeast to New England may face dangerous heavy snow and winds approaching hurricane intensity with the potential to knock out power, flood coastal areas and severely impair travel, forecasts show. (CNN Weather)

(CNN) — The path of a weekend nor’easter is becoming clearer as 75 million people from the Southeast to New England may face dangerous heavy snow and winds approaching hurricane intensity with the potential to knock out power, flood coastal areas and severely impair travel, forecasts show.

The storm is due to form Friday off the coast of the Carolinas and rapidly strengthen as it moves north up the East Coast overnight into Saturday.

“The heaviest snowfall is likely to fall across a swath extending from the Eastern Shore of Maryland up through most of Maine where 6-12 inches are likely. Parts of coastal New England, where blizzard conditions are forecast, may see between 1-2 feet of snow with locally higher amounts possible, specifically over coastal Massachusetts,” the Weather Prediction Center said early Friday.

“Powerful winter storm to produce significant impacts across parts of New England and coastal Mid-Atlantic/Northeast on Saturday,” it said. In a blizzard, snow is joined by winds gusting over 35 mph for more than three hours, creating visibility of less than a quarter mile.

• Eastern Massachusetts, including Boston, could see between 18 to 24 inches of snow combined with wind gusts up to 70 mph, forecast models show. Two to 4 inches per hour could fall in the city, with conditions due to peak Saturday between 8 a.m. and 5 p.m. Similar snow total and wind predictions are in place for Rhode Island.

• New York City could get 8 to 12 inches of snow with 45 mph gusts, while 14 inches could pile up elsewhere in New York state and in Connecticut, with wind gusts as strong as 55 mph, the CNN meteorologists and the weather service predict. Effects will peak in the nation’s most populous city Saturday from 5 a.m. to 4 p.m.

• The Philadelphia area in eastern Pennsylvania is expected to get 4 to 11 inches of snow, with a winter storm warning in place from 7 p.m. Friday to 7 p.m. Saturday. Up to an inch of snow an hour is possible, along with gusts of 35 mph. Similar conditions are expected in the Dover, Delaware, area.

• In Washington, DC, snowfall could be 1 to 3 inches, with higher amounts in some parts and conditions due to peak Friday between 4 and 9 p.m.

• Richmond, Virginia, could get 1 to 3 inches of snow, and the whole state is under a state of emergency. Raleigh, North Carolina, may see 1 to 2 inches of snowfall. Winter weather advisories run from Friday evening to midmorning Saturday in those places.

Winter weather alerts also are in place Friday as far south as Kentucky. And already, more than 1,200 US flights are canceled Saturday, according to FlightAware.

The storm is expected to unleash a double whammy of heavy snowfall and strong winds throughout parts of the Northeast, but the exact impact across the region remains in question.

“This storm is likely to strengthen at a rate, and to an intensity, equivalent to only the most powerful hurricanes, so the high-end potential of this storm cannot be overstated,” CNN meteorologist Brandon Miller said. “But with nor’easters, like in real estate, it will all come down to location, location, location.”

Extremely cold temperatures are possible, the Weather Prediction Center warned, as is coastal flooding. And the stronger the storm, the greater the coastal surge along the coast will be.

“Coastal flooding is a concern thanks to astronomically high tides on Saturday,” the weather service office in Boston said. “The combination of strong northeast winds and high seas will bring storm surges that, if coinciding with high tide, would lead to minor or moderate coastal flooding.”

The storm is expected to strengthen through a process called bombogenesis. Also referred to as a bomb cyclone, it happens when a storm drops a certain amount of atmospheric pressure over 24 hours.

New York City could get between 8 and 12 inches of snow, with wind gusts over 50 mph, according to CNN meteorologists. But the weather service early Friday said there is a 10% chance the bomb cyclone may dump more than 17 inches of snow there — and also gives a 10% chance of zero snow.

A European forecast model shows New York City on the edge of the snow-or-no-snow divide but still predicts a heaping pile of snow. The American model shows nearly nothing for the city. A third model indicates a foot or more of snow.

And direction is playing a vital role in this storm’s projection, too, CNN meteorologist Chad Myers pointed out.

“It’s like a bowling ball going right down the middle or slightly off-center. You can get a 7-10 split or a strike with only an inch difference,” Myers said. “I think the models will come together as we get closer to the event.”