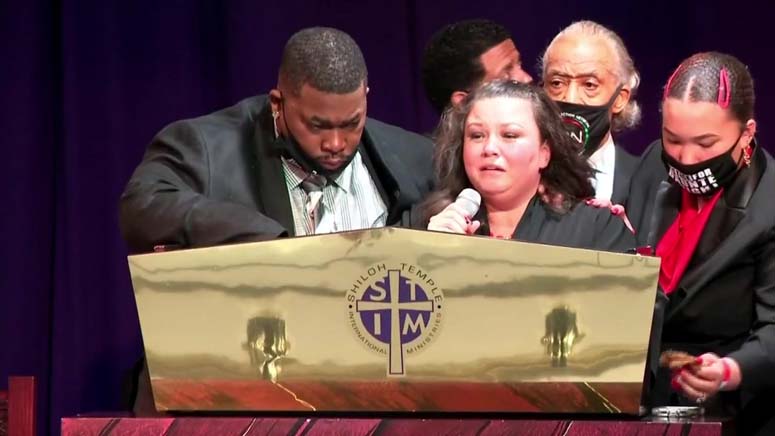 (CNN) — The city of Brooklyn Center, Minnesota, has agreed to pay $3.25 million to the family of Daunte Wright, a Black man who was killed by police during a traffic stop last year, attorneys for his family said.

The sum is part of a settlement deal the family struck with the city, which also agreed to make changes in its policing policies and training, the Wright family legal team said in a news release.

“This settlement will not be finalized until agreement is also reached on substantial and meaningful non-monetary relief,” the attorneys wrote in the news release.

Changes are expected to include training on police intervention, implicit bias, weapons confusion, de-escalation as well as how to handle situations arising during mental health crises, the attorneys explained.

Also under the settlement, a permanent memorial for Wright will be built at the existing Daunte Wright Memorial, according to the legal team.

An attorney for the city said in a statement the city and its insurer agreed to pay the $3.25 million “in exchange for a release of the City, its employees, and Kim Potter from any claims or actions stemming from Mr. Wright’s death.”

“The City has also agreed to non-monetary terms related to policies, procedures, training, the public safety resolution, and the Daunte Wright memorial. The City and Insurance Trust believe the early resolution of this matter will permit the family to begin the healing process and will give the City an opportunity to rebuild the relationship between its Police Department and the community,” attorney Jason M. Hiveley added.

Wright, 20, was pulled over April 11, 2021, by former Brooklyn Center police officer Kim Potter for an expired tag and illegal air freshener, authorities have said. During the stop, police learned Wright had an outstanding warrant; when Potter and a trainee officer attempted to arrest him, Wright tried to drive off. Potter shot and killed Wright, saying she had mistaken her gun for a Taser.

Potter, a 26-year police veteran, was sentenced in to two years in prison in February after she was tried and convicted of first- and second-degree manslaughter.

Wright’s shooting happened amid the trial of former Minneapolis police officer Derek Chauvin, who was convicted of murder in the May 2020 killing of George Floyd.

Following Wright’s killing, dayslong protests erupted in Brooklyn Center, which is just 10 miles from Minneapolis — reigniting the scrutiny over the use of force by police against Black Americans

The settlement in Wright’s case also calls for training related to traffic stops for equipment violations that do not interfere with the safety of the driver, passenger or members of the community, according to family’s attorneys.

“There is no true justice for the Wrights because Daunte is never coming home,” co-counsel Jeff Storms said in the statement. “A guiding principle of our efforts was to strike a balance between holding Brooklyn Center accountable, while not undermining the financial stability of the city or limiting the services it provides.”

Potter can be heard repeatedly yelling, “Taser” before she shot Wright with her handgun.

“Holy sht! I just shot him,” she said in the video, adding, “I grabbed the wrong f*king gun, and I shot him.”

Potter resigned from the police department days after the shooting.

During trial, Potter said, “I didn’t want to hurt anybody.”

“I was very distraught. I just shot somebody. I’m sorry it happened,” she said after a prosecutor asked about her behavior following the shooting. “I’m so sorry.”

Prosecutors argued “accidents” can be crimes if they happen due to “recklessness or culpable negligence.”

Following the conviction, Wright’s mother, Katie Bryant, told CNN, “Justice would be Daunte being home. Justice would be no more names being yelled in our streets. … But right now, we’re going to accept accountability, and we’re thankful for that.”

Potter is required to serve two-thirds of her two-year sentence in prison, or 16 months, according to state law. With good behavior, she could be eligible for supervised release for the remaining third.