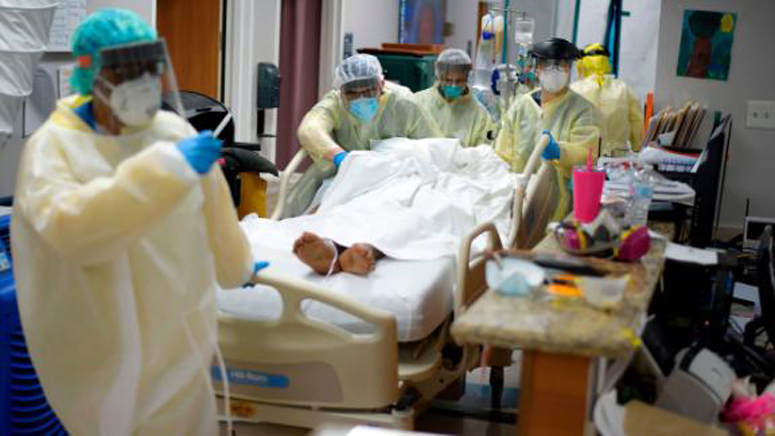 (CNN) — While the Covid-19 mortality rate may be on the decline, the nearly 3 million cases and ICUs at capacity show the US is still in the grips of a pandemic with no signs of slowing.

“It’s a false narrative to take comfort in a lower rate of death,” the director of the National Institute of Allergy and Infectious Diseases Dr. Anthony Fauci cautioned in a press conference Tuesday with Sen. Doug Jones, an Alabama Democrat. “There’s so many other things that are very dangerous and bad about this virus, don’t get yourself into false complacency.”

The White House has repeatedly pointed to the falling death rate as evidence of the nation having the virus under control. But many other pandemic metrics continue to surge.

More than 2.9 million cases and 131,480 deaths have been reported across the country so far, according to data from Johns Hopkins University. And the United States saw a record number of 60,021 new cases Tuesday. Across the nation, 35 states are seeing growing numbers of new cases from last week.

In Florida, where cases have surged, ICUs at 56 hospitals have reached capacity. And in Arizona, the state has been setting record high daily death counts about once a week, including Tuesday — the same day the state reported its lowest-ever number of available ICU beds.

“We need medical professionals, we need testing kits, we need supplies immediately,” Phoenix Mayor Kate Gallego told CNN’s Chris Cuomo Tuesday. “Our hospital is already in dire straits and they tell us in the next two weeks it is going to get to an unbearable level of crisis.”

California and Texas are among the states setting records as cases climb nationally.

With nearly 6,000 patients Tuesday, California hospitalizations are at an all-time high. Tuesday saw a 3.4% increase in new patients from the day before.

The state also recorded a record number of coronavirus patients in intensive care units, according to data from California Department of Public Health.

Texas had its highest single day increase in coronavirus cases Tuesday, with 10,028 new cases reported. The total for the state is now more than 210,000 cases and 2,715 deaths.

Texas Gov. Greg Abbott announced that a testing site in Edinburg will offer 5,000 free tests a day between Wednesday and July 14 in an effort to increase testing in hotspots.

“This new surge testing site will help us identify and mitigate the spread of COVID-19 in the Rio Grande Valley and keep Texans safe” Abbott said in the release. “We remain committed to working with our local and federal partners to develop more ways to combat the COVID-19 pandemic and protect public health.”

As of Monday, 35 states plus Washington, DC and Puerto Rico had implemented some type of mask requirement order, and Fauci said he is “strongly in favor” of the mandates to curb the spread.

“When you look at what we can do that we know works, it’s the use of masks, physical distance and avoiding crowds,” Fauci said Tuesday. “So, if you’re saying it doesn’t matter whether you put it on or take it off, you’re giving a wrong, mixed signal. The signal should be: Wear a mask. Period.”

If most Americans heed that signal, as many as 45,000 fewer Americans will die of coronavirus this fall, according to Dr. Chris Murray, the director of the University of Washington’s Institute for Health Metrics and Evaluation (IHME).

The newest model, released Tuesday, projects as many as 208,000 coronavirus deaths by November 1. The new death rate stems from the recent surge in cases combined with seasonality and schools reopening, Murray said.

But that number drops to 163,000 if most Americans wear a face mask, according to the model.

“It’s an incredibly simple strategy and intervention,” Murray told CNN’s Wolf Blitzer. “It’s one that will save lives, but it will also help the economy enormously because it will avoid shutdowns which will inevitably come when things get quickly out of control in some states.”

College students may be going back in the fall, just not all of them

Colleges and universities across the country are navigating how to safely reopen and keep students in the classroom come the fall semester.

New York University has implemented mask requirements and social distancing measures for the next semester. Caps will be placed on enrollment and space capacity, and classroom occupancy will be reduced by 50%, according to an email from NYU leadership to the community.

As soon as July 15, all students, faculty and visitors to the University System of Georgia will also be mandated to wear masks, USG announced on its website.

And though Columbia University announced undergraduates and students of Columbia College and the Fu Foundation School of Engineering and Applied Science will return in the fall, only 60% will be welcomed back. Most classes will still be taught in remote or hybrid form.

Brown University will shift its calendar and add a summer term to accommodate more students on campus at separate times, according to a letter to students from University President Christina Paxson. The university will also offer virtual learning courses to all students, regardless of whether they are living on campus, and all classes with more than 20 students will be conducted remotely.

Advocates of higher education called on Congress Tuesday to approve federal aid to help colleges and universities to avoid budget cuts in the upcoming academic year.