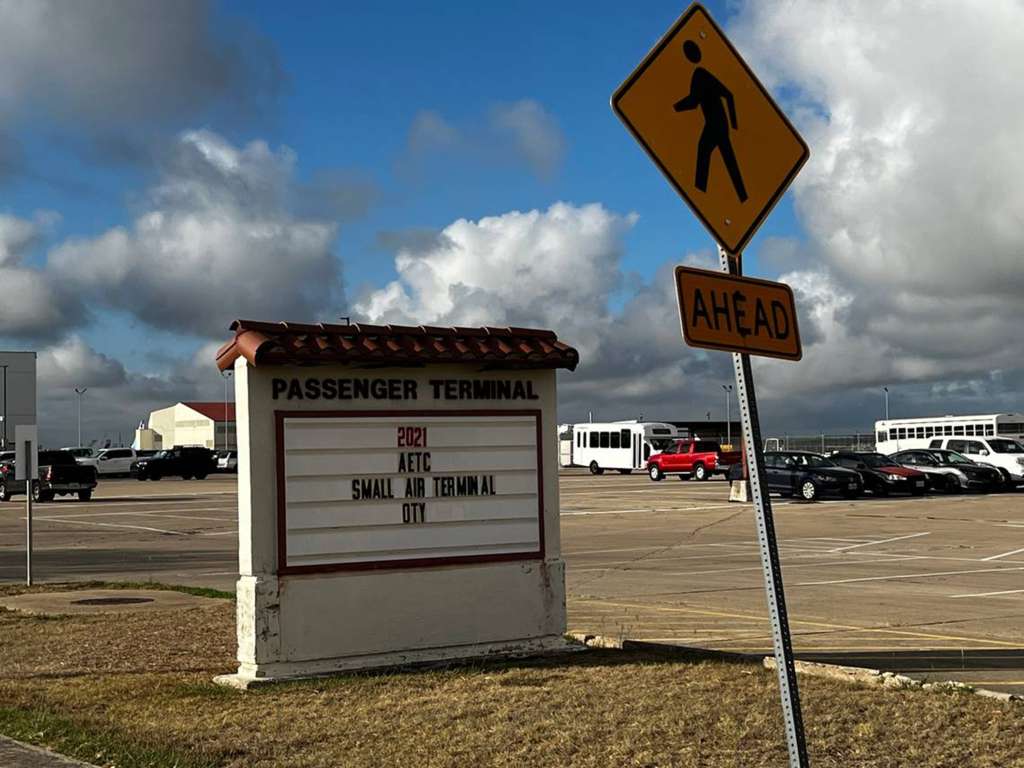 There were few signs of activity at Kelly Field in San Antonio on Tuesday morning, Sept. 20, 2022, despite reports of a plane of migrants scheduled to take off from there and fly to Delaware. (Carl Juste/Miami Herald/Tribune News Service via Getty Images)

(CNN) — Delaware officials and volunteers began to make preparations Tuesday after reports and flight plans suggested a plane chartered to take migrants to Martha’s Vineyard last week was about to bring a group of migrants from Texas to the president’s home state.

By Tuesday afternoon, though, there was no sign of such a flight, and the plane expected to depart Kelly Field in San Antonio had not even arrived at the departure airport.

Jill Fredel, the director of communications for the Delaware Department of Health and Social Services, said in a news conference Tuesday that they have no reports of any migrants arriving at this time. She said the governor’s office has not received any outreach from Florida or Texas, but noted the state is putting preparations in place just in case.

Emily David Hershman, a spokesperson for Delaware Gov. John Carney, said they were aware of the reports and were working to prepare in case migrants arrived unannounced.

“We are coordinating with Federal officials and are prepared to welcome these families in an orderly manner as they pursue their asylum claims,” she said.

The preparations came after flight tracking sites overnight displayed a flight plan filed with a commercial scheduler and the Federal Aviation Administration involving one of the Ultimate Jet charter planes that was used in the Martha Vineyard flights and resembled that flight. The sites listed a route from Kelly Field in San Antonio to a brief stop in Crestview, Florida, and on to Georgetown, Delaware.

Sheriff Javier Salazar of Bexar County, which includes San Antonio, said he had been told to expect another flight Tuesday, but plans were changed.

“We had word this morning that there was going to be a flight arriving to San Antonio and leaving with a planeload of migrants toward Delaware,” he told CNN’s Alisyn Camerota Tuesday, “but my understanding is that, at the last minute, we received word that flight was postponed.”

Last week, a group of nearly 50 migrants, most of them from Venezuela, were flown from Texas to Martha’s Vineyard, Massachusetts, under arrangements made by Florida Gov. Ron DeSantis. The migrants spent 44 hours on the island and have since been taken to Joint Base Cape Cod.

DeSantis, a Republican who is up for reelection this year, said he wanted to call attention to the migrant crisis at the US-Mexico border and to criticize the Biden Administration’s immigration policies. Texas Gov. Greg Abbott, another Republican with a reelection bid, has similarly sent thousands of migrants on buses to New York and Washington, DC, both led by Democrats, throughout the summer.

‘You can come visit,’ Biden says

Volunteers and city and state officials began to descend on the regional airport around noon, waiting for word on when flights might arrive.

Sen. Chris Coons, the Delaware Democrat, told CNN he’s been on the phone — including for “much of last night” — with community leaders “to make sure that we provide an appropriate, welcoming and supportive reception in Delaware” in the event that migrants are sent to their state.

“Simply put, what a cruel stunt to a group of folks who are applying for asylum. ‘There’s gonna be jobs and housing on either side of this flight, get on this plane,'” Coons said. “And then they get off the plane and they’re like, ‘Nope. You’re 1,000 miles farther from where your hearing is going to be.'”

Earlier, a DHS official told CNN that the agency has touched base with the state of Delaware and provided them with general guidance, as well as reached out to non-governmental organizations in the area in the event there’s a flight Tuesday.

White House spokesperson Karine Jean-Pierre said the White House has coordinated with Delaware officials but declined to say how they received word that a plane of migrants may be heading to Delaware.

“What I can tell you that our heads up did not come from Governor DeSantis because his only goal is, as he’s made it really quite clear, is to create chaos and use immigrants fleeing communism as political pawns,” she said. “So, it’s about creating political theater.”

For his part, President Joe Biden offered a short response to the report of a possible migrant flight to his home state.

“You can come visit,” he said. “We have beautiful shoreline.”

For the past nine months, DeSantis has repeatedly suggested Delaware would be a potential landing spot for migrants transported through Florida’s new relocation program — teasing the president’s home state more than any other Democratic destination, often to massive applause from Republican audiences.

DeSantis at first levied the threat as a warning to the federal government not to send large groups of migrants processed at the border to Florida. At the Conservative Political Action Conference in February, DeSantis told the crowd “if Biden is dumping illegal aliens into Florida from the southern border, I’m rerouting them to Delaware.”

When that didn’t happen, DeSantis began floating the idea of using state dollars to directly transport migrants from the border to Biden’s doorstep.

“They don’t like when the red states are sending illegal aliens to their communities,” DeSantis said last month at a rally in Pittsburgh for GOP candidates there. “We’re happy to help out in any of that when we can, including not just sending to New York and DC, you need to be sending to Delaware as well.

At an unrelated news conference Tuesday afternoon, DeSantis said “I cannot confirm” the reports about a flight to Delaware but defended the Martha’s Vineyard flights as helpful to the migrants involved.

“They were hungry, homeless, they had no opportunity at all,” DeSantis said. “They were provided an ability to be in the most posh sanctuary jurisdiction maybe in the world. And obviously it’s said that Martha’s Vineyard people deported them the next day. They could have absorbed this. They chose not to.”

In fact, officials from Martha’s Vineyard and the State of Massachusetts coordinated with the military to relocate the migrants to Joint Base Cape Cod.

The flights to Martha’s Vineyard was sharply denounced by the White House, Democratic officials and immigration lawyers who say the migrants were misled about their final destination and used for a political stunt. Attorneys for many of the migrants said Monday that brochures given to their clients were “highly misleading” and “used to entice (their) clients to travel under the guise that (resettlement) support was available to them.”

Sheriff Salazar, a Democrat, said Monday evening his agency will open an investigation into the Martha’s Vineyard flights, saying he believed they were “exploited and hoodwinked.”

Yet DeSantis defended his actions on Fox News on Monday night and noted that Martha’s Vineyard was a “sanctuary jurisdiction,” a term for localities with policies designed to limit cooperation with or involvement in federal immigration enforcement action.

“They all signed consent forms to go and then the vendor that is doing this for Florida provided them with a packet that had a map of Martha’s Vineyard, it had the numbers for different services that are on Martha’s Vineyard,” DeSantis said. “Why wouldn’t they want to go, given where they were? They were in really, really bad shape and they got to be cleaned up, everything, treated well.”

US Customs and Border Protection encounters along the US-Mexico border have already topped 2 million so far this fiscal year, according to agency data, with migration from countries like Venezuela, Nicaragua and Cuba driving numbers up.