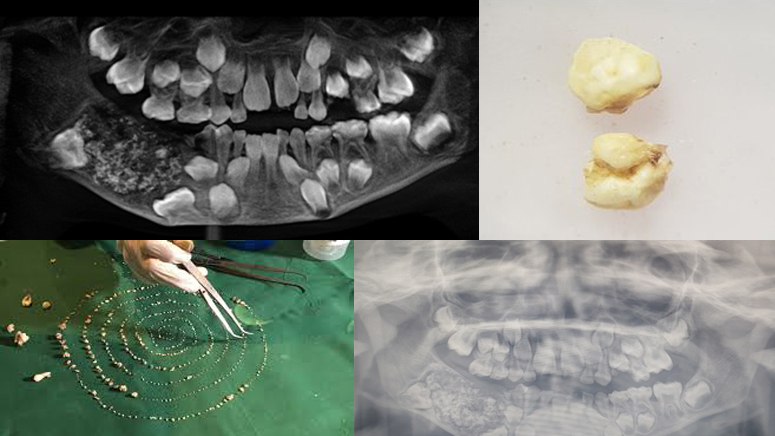 (WHDH) — A 7-year-old boy complaining about a swollen jaw recently underwent a dental procedure in which dentists removed more than 500 teeth from a mass that was growing in his jaw.

Saveetha Dental College and Hospital in India says the boy’s parents first noticed swelling in his jaw when he was 3 years old but opted not to have him undergo investigative procedures because he was so young.

The swelling went undiagnosed for years and gradually increased in size, prompting an emergency visit because the boy’s parents feared it could be cancer.

An initial examination by surgeons revealed a large lesion with multiple hard structures at a single site within the lower jaw, according to the hospital.

During surgery, the hospital says a doctor noticed a “well-defined, bag-like mass,” which was removed. It was said to be about 200 grams in weight.

The specimen was radiographed and oral pathologists were reportedly shocked when they found 526 “tooth-like” structures.

“It was reminiscent of pearls in an oyster,” pathologists said of the mass.

It took five hours of meticulous work to remove all of the tiny teeth from the mass. The teeth are said to have varied in size from 1-15 millimeters, resembling a tooth with a crown covered by enamel and a root-like structure.

The bizarre case marks the first in the world to be ever documented.