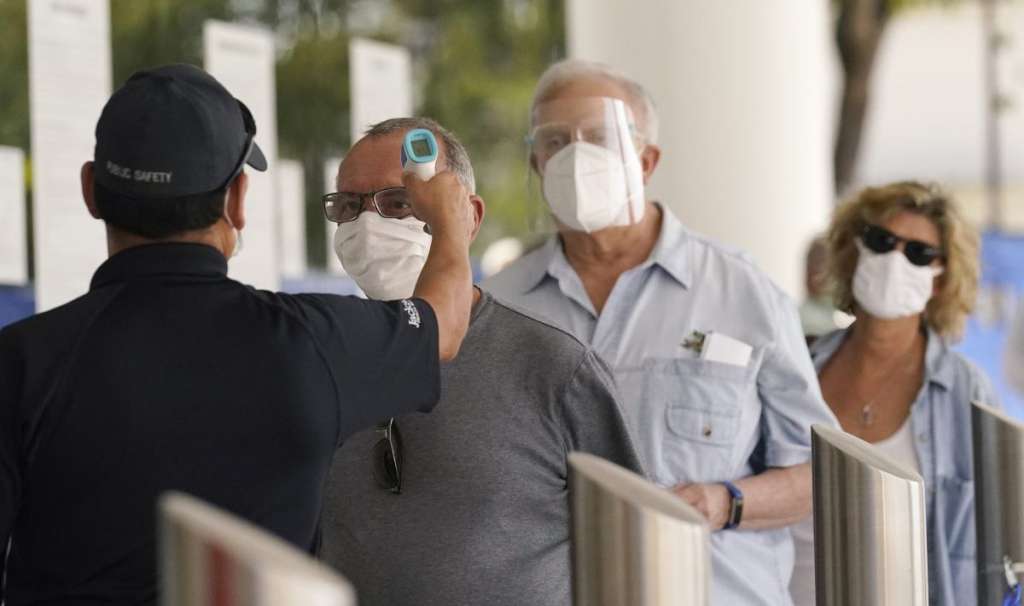 FILE - In this Feb. 8, 2021, file photo, Florida seniors have their temperatures taken before receiving the second dose of the Pfizer COVID-19 vaccine at Jackson Health System in Miami. (AP Photo/Marta Lavandier, File)

As of Tuesday afternoon, the cumulative number of COVID-19 cases recorded in Massachusetts since February 2020 stood at 772,932, or nearly 100,000 more than the population of Boston.

After dropping to double-digit levels in June, the seven-day average of newly reported cases of COVID-19 began climbing in July, as the Delta variant contributed to spread of the virus, and hit a late-summer peak of 1,895.6 on Sept. 13.

Updating the Public Health Council on Wednesday, acting commissioner Margret Cooke said COVID-19 hospitalizations have also been dropping, from 707 on Sept. 13. As of Tuesday, that number was 541.

“This is a very good trend, and given our last few weeks of data, our decreasing case counts and with our ever-increasing vaccination rates, we expect this trend to continue,” Cooke said.

“I want to emphasize that breakthrough cases in Massachusetts are incredibly low, less than 1 percent of those who are fully vaccinated,” Cooke said. “Those who are hospitalized or who have died after being fully vaccinated are even lower. All available data continue to support that all three vaccines used in the United States are highly protective against severe disease and death from all known variants of COVID-19.”

So far, of the three vaccines, only the Pfizer vaccine has been authorized by the federal government for booster shots in eligible populations.

A state vaccine equity program focuses on 20 communities, and Cooke said efforts in those cities and towns to bolster vaccination access and address vaccine hesitancy have been working.

She said the statewide first-dose average vaccination rate increased by 5.1 percentage points over the last two months, and 18 of those 20 communities experienced larger gains.

Cooke also offered a particular shoutout to Chelsea, one of the cities targeted by the equity program.

“At one time, you may remember, Chelsea had the highest rate of COVID cases in our commonwealth, and today over 99 percent of eligible residents in Chelsea have received at least one dose of the vaccine,” she said.