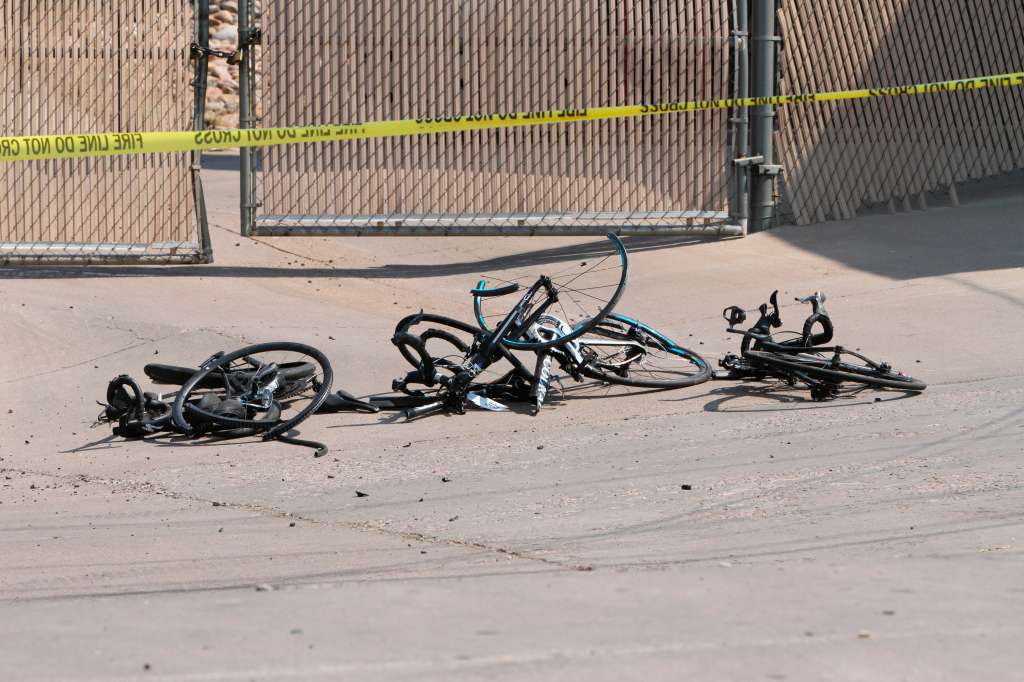 This Saturday, June 19, 2021, photo courtesy of The White Mountain Independent shows the scene of an accident with broken bicycles in Show Low, Ariz. A driver in a pickup truck plowed into bicyclists competing in a community road race in Arizona on Saturday, critically injuring several riders before police chased down the driver and shot him outside a nearby hardware store, police said. (Jim Headley/The White Mountain Independent via AP)

SHOW LOW, Ariz. (AP) — A driver in a pickup truck plowed into bicyclists during a community road race in Arizona on Saturday, critically injuring several riders before police chased the driver and shot him outside a nearby hardware store, authorities said.

Six people were taken to a hospital in critical condition after the crash in the mountain town of Show Low, about a three-hour drive northeast of Phoenix, police said. Helmets, shoes and crumpled and broken bicycles were strewn across the street after the crash, and a tire was wedged into the grill of the truck, which had damage to its top and sides and a bullet hole in a window.

Two other people went to a hospital themselves, city spokeswoman Grace Payne said, and one of the severely injured was later flown by medical helicopter to a Phoenix-area hospital.

The suspect, a 35-year-old man, also was hospitalized in critical but stable condition.

“We don’t know the motivation,” Payne told The Associated Press. “We know he fled the scene.”

Police said a Ford pickup truck struck the bicyclists about 7:25 a.m. in downtown Show Low during the annual 58-mile (93-kilometer) Bike the Bluff race, then fled. Officers pursued the driver and tried to stop him before he was shot, authorities said.

Tony Quinones, 55, of Santa Fe, New Mexico, told the New York Times that he had been riding for about six minutes with other cyclists ages 55 and over when a black pickup that had been driving in the opposite direction crossed over three lanes and headed toward the cyclists.

He assumed the driver was turning into a parking lot. Instead, the driver plowed directly into the cyclists who had been ahead of Quinones, he said.

“I don’t know who the heck this guy is, or what his motive was,” Quinones told the Times. “But he intentionally did not go left into a parking lot. He drove his truck directly and intentionally into our group, and you could hear him accelerate until he hit that telephone pole.”

Quinones said he had seen bikes and bodies flying.

After the driver hit a telephone pole, cyclists ran up to the truck and started pounding on the windows, screaming at the driver to get out, he told the Times.

But rather than stop, the driver hit the accelerator and backed out, drove down the road, made a U-turn and then headed back toward the cyclists, Quinones said.

Payne said the driver did not comply when officers tried to arrest him, but the circumstances of the shooting were not immediately released. Neither were the identities of the suspect and victims.

Officials said the race had 270 participants.

“Our community is shocked at this incident and our hearts and prayers are with the injured and their families at this time,” police spokeswoman Kristine Sleighter said in a statement.

The Navajo County sheriff’s office and Arizona Department of Public Safety were helping investigate. U.S. 60, the main street in the town tucked in the White Mountains, was closed in the area.