Driver slams into Muslim family, killing 4 people, in what Canadian police say was a hate crime 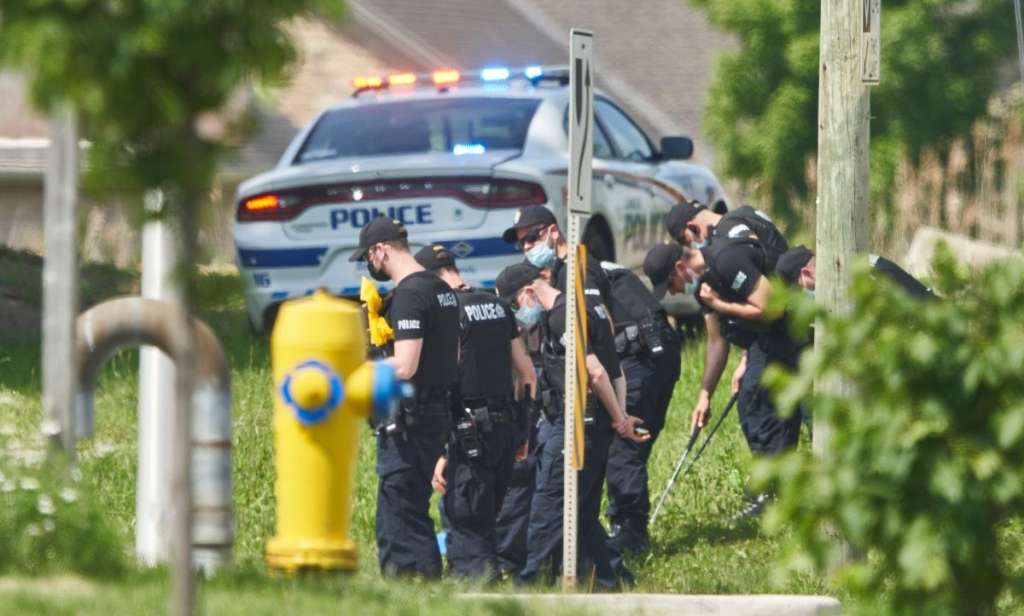 A line of police officers look for evidence at the scene of a car crash in London, Ontario on Monday, June 7, 2021. Police say multiple people have died after several pedestrians were struck by a car Sunday night. (Geoff Robins/The Canadian Press via AP)

(CNN) — A family of five was waiting at an intersection in the Canadian city of London when a driver intentionally mounted the curb and struck them, killing four, because of their Islamic faith, officials said Monday.

“There is evidence that this was a planned, premeditated act, motivated by hate. It is believed that these victims were targeted because they were Muslim,” said Detective Superintendent Paul Waight of the London Police. “There is no known previous connection between the suspect and the victims.”

A 74-year-old woman was pronounced dead at the scene Sunday night and the other four family members — a 46-year-old man, a 44-year-old woman, a 15-year-old girl, and a nine-year-old boy — were transported to the hospital by paramedic services.

The two adults and the teen died at the hospital, police said. The boy is still recovering in serious but non-life-threatening condition, they said, adding that family members of the victims have requested the names of the victims not be released at this time.

According to Waight, the family was waiting at the intersection when a black pickup truck, driven by 20-year-old Nathaniel Veltman, mounted the curb and struck them.

Veltman was later stopped in the parking lot of a mall, where police were able to place him under arrest, according to police.

Veltman has been charged with four counts of first-degree murder and one count of attempted murder.

According to Waight, London Police are also working with the Royal Canadian Mounted Police on potential terrorism charges against Veltman. It is unclear if Veltman has obtained an attorney.

“We understand that this event may cause fear and anxiety in the community, and in particular the Muslim community, in any community targeted by hate. I want to reassure all Londoners that all of us on the call today and many others stand with you and support you,” London Police Chief Steve Williams said. “There is no tolerance in this community for individuals who, motivated by hate, target others with violence.”

London is a city in southwestern Ontario with a population of around 385,000 people.

Canadian Prime Minister Justin Trudeau said in a statement that he was horrified by the attack.

“To the loved ones of those who were terrorized by yesterday’s act of hatred, we are here for you. We are also here for the child who remains in hospital — our hearts go out to you, and you will be in our thoughts as you recover,” Trudeau said.

“To the Muslim community in London and to Muslims across the country, know that we stand with you. Islamophobia has no place in any of our communities. This hate is insidious and despicable — and it must stop,” he added.