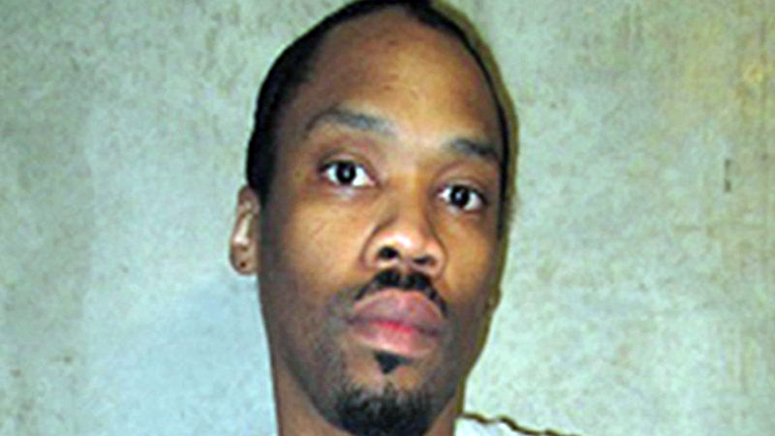 OKLAHOMA CITY (AP) — Attorneys for Julius Jones filed a last-minute emergency request Thursday seeking a temporary stop to his execution scheduled for later in the afternoon.

Republican Gov. Kevin Stitt has kept quiet about his decision on whether to grant clemency for Jones, 41, who has been on death row for two decades. He was convicted in the 1999 killing of Paul Howell, a businessman in the affluent Oklahoma City suburb of Edmond. Jones has maintained his innocence.

The request said Oklahoma’s lethal injection procedures post a “serious and substantial risk of severe suffering and pain to prisoners” and cited last month’s execution in which John Marion Grant convulsed and vomited as he was being put to death.

“This motion is being filed now admittedly on the day of Julius Jones’s execution. Nonetheless, it is timely under circumstances where the Governor has not acted on the clemency recommendation that, if accepted, would have obviated the need for this motion being filed seeking emergency relief today as it relates to Julius Jones.”

Jones is scheduled to receive a lethal injection at the State Penitentiary in McAlester.

Jones’ looming execution prompted high school students across Oklahoma City to walk out of their classes Wednesday. Prayer vigils were held at the state Capitol, and barricades were erected outside the governor’s mansion. Even Baker Mayfield, quarterback for the NFL’s Cleveland Browns, weighed in.

Mayfield, a Heisman Trophy winner from the University of Oklahoma, is among several high-profile athletes and entertainers who have weighed in on Jones’ case, urging Stitt to commute his sentence and spare his life.

“Yeah, it’s pretty rough, to be honest with you,” Mayfield said Wednesday, pausing and his eyes filling with tears. “That’s not something that’s easy to talk about. Been trying to get the facts stated and the truth to be told for a while.

Stitt has been tight-lipped about the case, but has met with Jones’ attorneys and Howell’s family.

Jones’ mother, Madeline Davis-Jones, who tried unsuccessfully to meet with Stitt on Monday, spoke to a group of about 300 people, many of them students from nearby high schools, who gathered at the Capitol on Wednesday outside Stitt’s office, chanted and sang hymns.

“I don’t want to go to a lynching tomorrow,” Davis-Jones said, her voice rising with emotion. “Why would I want to see someone hang? We should be through with that. Do you want your baby, your child to be hanged?”

Jones maintains he was framed by the actual killer, a high school friend and co-defendant who testified against him and was released from prison after 15 years.

State and county prosecutors have said the evidence against Jones is overwhelming. Trial transcripts show witnesses identified Jones as the shooter and placed him with Howell’s stolen vehicle. Investigators also found the murder weapon wrapped in a bandana with Jones’ DNA in an attic space above his bedroom. Jones claims the murder weapon was placed there by the actual killer, who visited Jones’ house after Howell was shot.

The state’s Pardon and Parole Board twice voted 3-1 to recommend Stitt grant clemency to Jones and commute his sentence to life in prison.

Stitt spokesman Charlie Hannema said “the governor takes his role in this process seriously and is carefully considering the Pardon and Parole Board’s recommendation as he does in all cases.”

Paul Howell’s sister, Megan Tobey, testified before the board that she distinctly remembers seeing Jones shoot her brother in front of his two young daughters.

“He is the same person today as he was 22 years ago. He’s still getting into trouble. He’s still in a gang. He’s still lying. And he still feels no shame, guilt or remorse for his action,” Tobey said. “We need Julius Jones to be held responsible.”

In a separate vote on Wednesday, the same board voted 3-2 to grant clemency to another death row inmate, Bigler Stouffer, citing concerns with the state’s lethal injection protocols. Stouffer is scheduled to die on Dec. 9.

Jones’ case was profiled in “The Last Defense,” a three-episode documentary produced by actress Viola Davis that aired on ABC in 2018. Since then, Kim Kardashian West and athletes with Oklahoma ties, including Mayfield and NBA stars Russell Westbrook, Blake Griffin and Trae Young, have urged Stitt to commute Jones’ death sentence.

Oklahoma ended a six-year moratorium on executions — brought on by concerns over its lethal injection methods — last month. John Marion Grant, 60, convulsed and vomited as he was being put to death Oct. 28.

Grant was the first person in Oklahoma to be executed since a series of flawed lethal injections in 2014 and 2015. Richard Glossip was just hours away from being executed in September 2015 when prison officials realized they had the wrong lethal drug. It was later revealed that the same wrong drug had been used to execute an inmate in January 2015.

The drug mix-ups followed a botched execution in April 2014 in which inmate Clayton Lockett struggled on a gurney before dying 43 minutes into his lethal injection — and after the state’s prisons chief ordered executioners to stop.